EUGENE, Ore.—March 29, 2016— In 2014, Ninkasi Brewing Company, an independent craft brewery based in Eugene, Oregon, embarked on a journey that took its beer to new heights—77.3 miles above Earth to be exact. The Ninkasi Space Program (NSP), was an initiative with one goal in mind: send brewer’s yeast to space, return it to Earth to brew delicious beer. In October 2014, Ninkasi sent six vials of brewer’s yeast to space aboard a rocket launched from Spaceport America and later, released its first “space beer” in 2015, Ground Control. This year, the beer returns with its sequel—Bourbon Barrel-Aged Ground Control. Brewed with Oregon hazelnuts, star anise and cocoa nibs, this Imperial Stout is fermented with an Ale yeast that survived a trip to space, barrel-aged for four months and blended. Bourbon Barrel-Aged Ground Control can be found in limited-edition 22-ounce bottles starting April 12, 2016 throughout Ninkasi’s distribution territory.

“Ground Control lives on; first with yeast into space and now into barrels, we are thrilled to carry on the excitement of space and brewing exploration,” says Nikos Ridge, Ninkasi co-founder and CEO. “The frenzy around Ground Control’s first release extended beyond our expectations; we look forward to bringing another iteration to more beer and science lovers.” 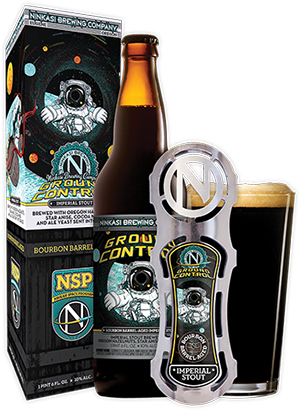 The story behind Ground Control’s creation began in July 2014 with Mission One of NSP. In partnership with the Civilian Space eXploration Team (CSXT) and Team Hybriddyne, Ninkasi loaded a rocket with 16 vials of brewer’s yeast. A series of unexpected circumstances led to tracking issues, leaving the payload lost on the floor of the Black Rock Desert for 27 days. Due to the extreme desert heat, the yeast was not viable for brewing. An opportunity for Mission Two presented itself with UP Aerospace Inc., a private spaceflight corporation, and in October 2014, six vials of brewer’s yeast traveled above Earth’s atmosphere from Spaceport America on an SL-9 rocket. The yeast returned to Earth, and was immediately transported back to Ninkasi’s lab to begin propagation and brewing.

“Barrel aging Ground Control brings the flavors together in a fantastic way,” explains Ninkasi founding brewer and co-founder, Jamie Floyd. “The wood itself imparts subtle vanilla flavors while the Bourbon notes enhance the rich flavors of the cocoa nibs and hazelnuts without overshadowing the star anise.” Smooth, flavorful, robust and spirited, Bourbon Barrel-Aged Ground Control marks another step for Ninkasi and its quest to push the brewing industry forward.

Available April 12, 2016, each 22-ounce bottle of Ground Control features a collectible outer-box illustrated by Eugene-based gig poster artist and illustrator, Neal Williams. In a partnership between Ninkasi’s in-house art department and Williams, the beer’s artworks features a psychedelic view of space with floating astronauts and barrels. Williams’ artwork can also be found on limited edition merchandise celebrating the release of Ground Control available at nsp.ninkasibrewing.com.

Ground Control Stats
Ground Control boldly combines local and out-of-this-world ingredients. This rich, complex Imperial Stout is brewed with Oregon hazelnuts, star anise and cocoa nibs, and is fermented with an Ale yeast that survived a trip to space and back. This second-edition brew has been aged in Old Forester Bourbon barrels for four months.