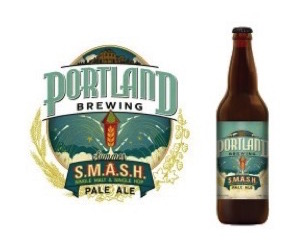 Portland, Ore. (March 23, 2015) — Summer is a season for simple times and simple pleasures. It warrants rest, relaxation and refreshing flavors. Look no further for that perfect thirst-quencher during these warmer months, Portland Brewing has you covered with its new single malt and single hop, S.M.A.S.H. Pale Ale.

Simplicity reigns as one hop and one malt are singled out to create this satisfying new brew. Goldpils Vienna malts and Simcoe hops combine to give S.M.A.S.H. Pale Ale a rich, bready base with lush pine and citrus notes. Its full body and well-rounded taste complement warm summer evenings, and is the ideal companion for backyard barbeques. “What I love about this beer is that it is deceptively simple, but still manages to be a very engaging, flavorful ale,” says head brewer Ryan Pappe. He explains, “It has the bright hop character northwest beer drinkers love, supported by a crisp, light malt that keeps the experience clean and refreshing. It just screams summertime.”

Like the passing of summer, S.M.A.S.H. will come and go in a flash. Look for it in Oregon and Washington stores and bottle shops, and the Portland Brewing Company Taproom, between April 1st and August 15th.  S.M.A.S.H Pale Ale is offered in six-pack and 22 oz. bottles, as well as on draft. Find the seasonal ale and other Portland Brewing favorites though the beer finder at http://www.portlandbrewing.com/finder/.