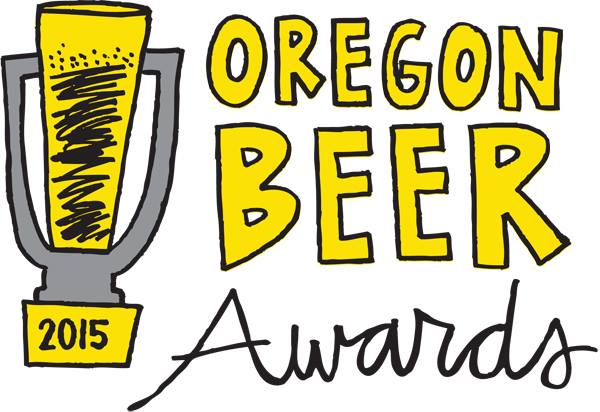 So one of the two Portland weekly papers, Willamette Week, took the initiative to honor the so-called best beers, breweries, festivals and beer bar in all of Oregon for the inaugural Oregon Beer Awards. On Wednesday, February 25th this will be released in Willamette Week’s 2015 Portland Beer Guide.

The awards ceremony took place last evening in Portland at the Doug Fir Lounge. People in attendance were treated to the first copies of the new beer guide. From briefly flipping through the guide it looks to be well done and presented for both the hard-core beer geek along with the casual beer drinker.

The staff at the Willamette Week made their own picks for its Top 10 Beers of  2015 and also included another set of awards compiled from the votes of 200 or so other participants. Willamette Week determined its own Top 10 Beers as they have done so in the past for its first two issues. In the first year of the guide Willamette Week voted Fearless Loki Red as one of the Top 10 from that year.

This year the papers Top 10 Beers are as follows:

For the industry voting, the Willamette Week sent ballots to approximately 200 people in the craft beer industry. I’m guessing from the responses that the Willamette Week‘s mailing list doesn’t venture too far out of the Portland metro area. We here at Brewpublic did not receive a ballot until one of the better beer writers from the Willamette Week and our friend, Brian Yaeger, realized that we were originally not part of the original invited list. (For this year’s guide, Yaeger did not work with the weekly paper.)

So how did the following beers, bars, breweries and festivals get nominated? The Willamette Week selected approximately 20 individuals from the beer industry. This was led by Willamette Week’s Martin Cizmar and included a few other beer writers including Jeff Alworth and (ed note: I must have misheard that part of Pete being part of the committee during last night’s event, my apologies for the confusion…updated, I was originally correct that this info was given at the awards, a comment from Samurai Artist was partially incorrect) along with beer bar owners and a few brewers including Breakside’s Ben Edmunds to make up this group.

Each of the categories allowed the 200 or so voters to select up to 3 choices from the predetermined set of nominees that were decided upon from this committee. For each category below the winners of the Gold, Silver and Bronze medals are placed before the rest of the category that is in no particular order of votes received.

When the Willamette Week’s 2015 Portland Beer Guide hits newsstands on Wednesday, February 25th, you will only see the top place finisher in each of these categories. I find it much more interesting to see what the voters had to choose from when casting their ballots. Hope you enjoy!

This was a good list of new breweries. I am a bit surprised that Fat Head’s was not in the top 3. Out of all the breweries listed, Fat Head’s was making the best beer right out of the gate.

This category seemed the most suspect to me. Clearly some top-notch beer bars were omitted from the nominating committee. Where was Horse Brass Pub? Come on, the Brass is an institution around here. If it weren’t for Don Younger who knows where Oregon’s craft beer scene would be today. The Cheese Bar with only 6 taps and a handful of bottles makes the list while APEX and The BeerMongers do not? Then two beer bars in DRAFT Magazine‘s Top 100 Beer Bars; Bazi Bierbrasserie and Imperial Taproom & Bottle Shop did not even get nominated.

Then when it comes to Bend, the only nominee is Crow’s Feet Commons. I had to look this one up. To save you the time I found out that it’s a bicycle and ski shop that also serves coffee and beer. Sounds as if it would be a busy place in the active town of Bend. But there are some quality spots that are truly a craft beer bar in Bend, including Platypus Pub and Broken Top Bottle Shop. I definitely see a large problem of the nominees within this category.

Not really sure what is meant by a “Brewpub Experience”. Maybe naming this category just Best Brewpub would make a bit more sense regarding the top place finishers. When I think of the definition of “Experience” I think that it would mean more than just the beer and the food, therefore McMenamins Edgefield should have won very easily followed by a closely by Pelican Pub & Brewery and Buoy Beer Company.

This category of nominees seemed also a bit suspect. I’m glad to see Cheers to Belgian Beers come out on top. Two of the better festivals in the state call Eugene home and both Sasquatch or Hellshire Day & Barrel Aged Beer Fest never received a nomination from the committee. However, Eastern Oregon Beer Festival in just its first year receives a nomination. Then the Portland Beer & Cheese Fest, a great fest but quite small, also receives a nomination.

Both Breakside and The Commons took over half of the votes to receiving a commanding Gold and Silver respectively. I’m a bit shocked that Barley Brown’s did not receive more votes than it did. And unlike other beer awards, this category had its own voting and did no fall upon medals earned from each of the other categories.

This category had some solid nominations to choose from. My favorite was also the Willamette Weeks’s 2015 Beer of the Year, Engelberg Pilsner. This is one of my favorite beers to enjoy prior to catching a game at the Moda Center.

The #5 Beer of the Year from Willamette Week, Pints Schwarzbier, didn’t even receive a nomination from the nomination panel. Of the nominees the top three seemed like solid winners. However I do miss Breakside’s Irish Stout. Such a great lower ABV beer, just wish they’d bring this one back in their lineup.

Cucumber Crush was quite the sour ale of choice from many beer drinkers…well until big bad Budweiser purchased them. This was my top choice in this category with Ching Ching a very close second. If my memory served me correctly I never tried Peche ‘N Brett in 2014. However after sampling it a few weekends ago during Zwickelmania at Logsdon’s soon to open downtown Hood River location I was blown away by it. Its an amazing beer!

The Commons was the clear winner in this category gaining 66 of the approximate 200 possible votes. Definitely a beer that is rarely turned down by this guy.

This category lives up to its title. The Willamette Week was all over the board with these listed nominees. I felt a solid list but nominating a few of these beers that were in limited supply definitely hurt the beer’s chances of gaining votes.

Of the beers nominated this category had the clear winners. It’s difficult to argue with these medal winners.

This category of winners was very tight. The one challenge with the categories Silver winner is that Sticky Hands recipe is a continually changing one. Not sure which version of this beer the 20 person selection committee was nominating. Maybe they truly tasted all of the various versions, if so I’m a bit jealous since the couple of versions I’ve tasted have been quite memorable.

With this category I really felt that Widmer Hefeweizen should have placed in the top 3 but of all the categories this was the best one for the predetermined nominees.

I added the ABV content to the list above when I conducted my voting. Because of the ABV content, this was a challenging category to choose from since many of these beers are over the generally accepted ABV threshold of under 5.0%. Gold Medal Winner Handtruck Pale Ale is a phenomenal lower alcohol beer but its just that, a lower alcohol beer at 5.5% ABV. Coming in at Silver was a true to style Session Beer, Suicide Squeeze at only 4.5% ABV which I felt was a top quality beer from Fort George. Then rounding out this category was a very high ABV beer but also quite enjoyable, Sweet As! Pacific Pale Ale clocking in at the robust 6.0% ABV. Maybe its just that the selection committee enjoys bigger beers or has difficulty understanding what is accepted when it comes to a session style beer.

I apologize for this one but I do not remember having the opportunity to vote in this category. Not sure if this was added after my ballot was submitted or if I made an error and did not get the other nominated beers. Still a solid group of winners, I’d just like to see the other beers that were nominated.

In all the event was a fun evening and it’s worth seeking out a copy of the Willamette Week’s 2015 Portland Beer Guide. It’s just that if the publisher wants to do an Oregon Beer Awards they could improve on the nomination process of events and beers that are more commonly accepted.