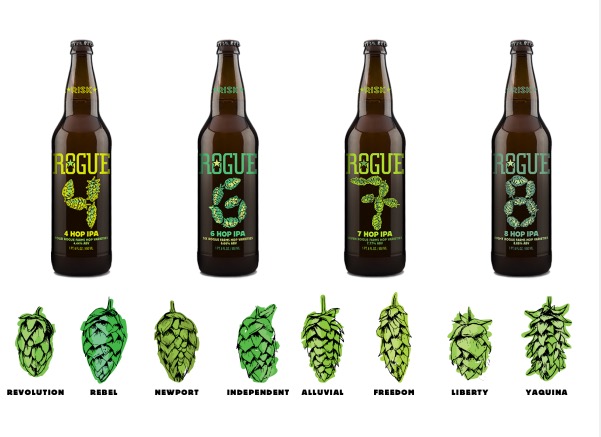 As the calendar turns to 2016 Rogue Ales will launch its new Hop Family Series of IPAs. This new homegrown series of four IPAs will highlight all eight varieties of hops that are grown at Rogue Farms in Independence, Oregon.

All four of these IPAs have a unique blend of hops that have been personally selected by Rogue Brewmaster John Maier. The new Hop Family Series is comprised of 4 Hop IPA, 6 Hop IPA, 7 Hop IPA and 8 Hop IPA.

“We wanted to offer the wide range of flavors, aromas and bitterness of the 8 varieties of hops we’ve grown at Rogue Farms,” said Maier in the brewery’s press release. “It’s the entire Rogue hop experience in four bottles.”

Rogue grows its own hops on a 42-acre hopyard on the banks of the Willamette River in Independence, Oregon. The 8 varieties include Alluvial, Freedom, Independent, Liberty, Newport, Rebel, Revolution, and Yaquina hops. Each year, Rogue Farms strings, stakes, trains, trims, separates, sorts, kilns, cools and bales the hops it grows before sending them to the Rogue Brewery in Newport, Oregon.

The entire Hop Family will be available January 2016 in 22 oz bottles. The bottles are serigraphed with field guide style drawings to distinguish the hops in each IPA. For more information about Growing the Revolution visit rogue.com.