During the 2015 Great American Beer Festival in Denver, Samuel Adams held a breakfast for media members in attendance. The breakfast was held to facilitate a few announcements and to disclose the results of two Samuel Adams sponsored competitions. Co-founder and chairman of The Boston Beer Company, Jim Koch, spoke at the event and discussed some exciting new plans for Samuel Adams.

The first and most important announcement was the introduction of three new Samuel Adams beers; Nitro White Ale, Nitro IPA, and Nitro Coffee Stout. Personally, I found the most impressive of the series to be the Nitro White Ale. While people have been nitrogenating stouts and more recently IPAs for years now, nitro wheat beers seem to be a fairly unexplored market. Wheat tends to impart soft, creamy textures into beer and conditioning a wheat beer with nitrogen seems to really accentuate those characteristics. Koch also went on to explain that these recipes were written with nitrogenation in mind (softer malt bill, rounded bitterness, etc.), rather than previously existing recipes conditioned with nitrogen. Samuel Adams Nitro series will be packaged in 4-packs of 16oz cans and available early 2016.

Koch later announced the winners of the annual Longshot competition that awards the winners an opportunity to have their recipes brewed at Samuel Adams and packaged in mixed six-packs. Winners of the competition included Tim Thompson (Raspberry Berlinner Weisse), Kevin Nancer (Belgian Golden Strong Ale), and Colin Foy (Flanders Red Ale). The winner of the “Brewing the American Dream Experienceship” was also announced at the event. Flounder Brewing, located in Hillsborough, New Jersey, received the award. The “Experienceship” gives start up breweries the ability to be mentored by experienced Samuel Adams employees, access to funding, and the opportunity to brew a Samuel Adams collaboration beer.

Finally, Koch ended the presentation with one last announcement. With a build up that made me believe he was surely about to announce a merger or acquisition; Koch announced his plans to write a book. The concept of the book presents itself to be more entrepreneurial, rather than technical, and similar to Sam Caligone’s Brewing Up a Business or Steve Hindy’s Beer School. I anticipate this being an interesting read coming from one of the most successful and pioneering members of the craft beer industry. The book will be titled Quench Your Own Thirst and will be released in 2016. 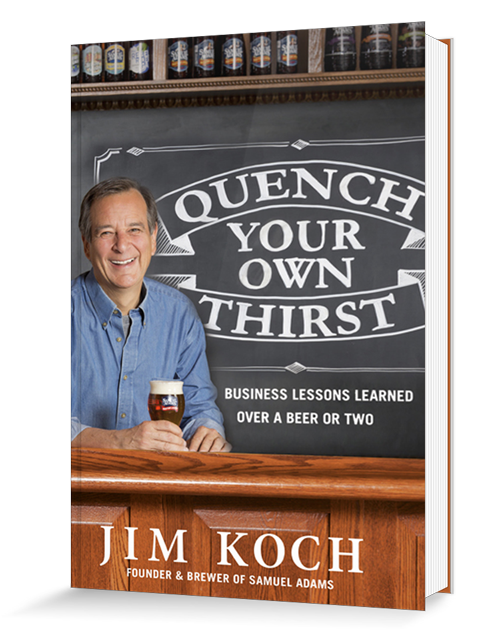