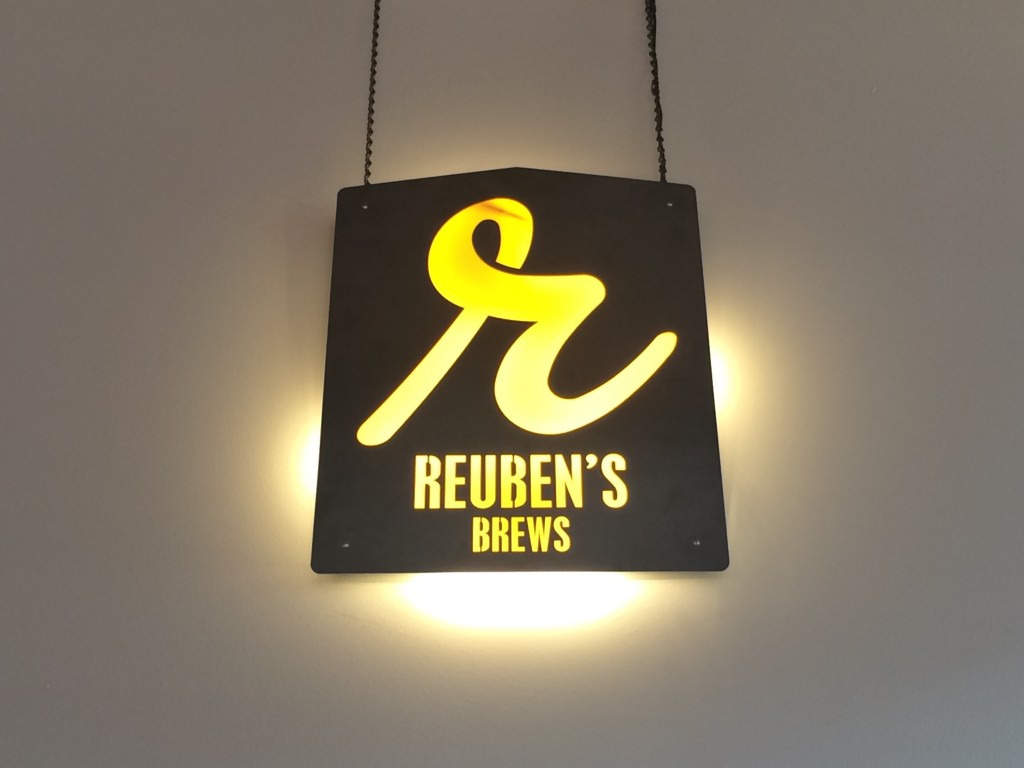 Since 2012 Reuben’s Brews has been providing the Seattle market some of the cities finest beers. During this time the brewery has been awarded several local, regional, national and international brewing awards. This was all accomplished from brewing its beers on a small 5 BBL brew system.

Now three years later, Reuben’s Brews has recently opened a new larger brewery and taproom located just a few blocks from its original location in the Ballard neighborhood of Seattle. This is great news for the taproom that RateBeer named 2014 Best Taproom in Washington, as it will become much larger and much more inviting in its new home at 5010 14th Ave NW.

This past Saturday, May 9th, Reuben’s Brews opened its doors to the public just as Seattle Beer Week kicked off two days earlier. We were fortunate enough to tour the new production brewery and taproom a few days prior to the opening to get an early glance of Reuben’s new location.

What was gathered was a marvelous 4,000 square foot space that is highlighted by its new 15 BBL brewhouse from Premiere Stainless of Escondido, CA. Along with this new brew system are some additional new, larger tanks that are being currently being filled. These new 30 BBL fermentation tanks will drastically increase the production at Reuben’s Brews. The brewery now has 180 BBL of fermentation capacity. This increased capacity will assist in its recent partnership with Click Distributing in Washington and the brewery’s goal of distributing its beers to those down south in Oregon.

“We’re really excited to show people the new brewery!” said Adam Robbings, co-founder and head brewer of Reuben’s Brews. “We’ve aimed to make the new taproom really comfortable but still open to the wonders of the brewing space. We are excited to brew more styles, add to our line-up with sours and lagers, and expand our barrel-aging program.”

Back in August 2012 when Adam, wife Grace and brother-in-law Mike Pfeiffer opened Reuben’s Brews the beer selection was limited due to the brewery’s small size. They were only able to have about five beers on tap at any given time. As the brewery grew over the past few years its tap selection grew with it to begin offering 12 house brewed beers on tap.

Beyond the increased production, the new, larger taproom will feature 24 taps, a large outside deck, additional seating and 10-foot video screen to show regional sports events. The new tables and seating are well thought out. The wood used to build the tables was re-purposed from a 100+ year old barn. There is even a new table that resembles the brewery’s cursive R logo. Best of all Reuben’s is now open seven days a week.

“Keeping our existing brewery as a pilot brewery and barrel house was key to us continuing to be able to brew a wide variety of beers,” said Robbings. “We already have bourbon, whiskey and tequila barrels on their way and sherry and red wine puncheons are ready to start our sour program. We are also really excited to also expand our distribution as at last we have beer for existing and new customers.”

Reuben’s original brewery will stay put where it’s at to be used for small batch beers and its extra space for Reuben’s barrel aging program. This wise decision will allow for more taps of its own beers amongst the new taproom’s 24 taps.

Later this week there are a few events that are part of Seattle Beer Week that will be taking place inside the new Reuben’s Taproom. On Friday, May 15th Reuben’s will host the Inaugural Ballard Brewers Night that will feature a various selection of guest taps for the other breweries in the neighborhood. Then on Saturday, May 16th Reuben’s will host its 3rd Annual Rye Beer Fest featuring around 15 of its own rye beers along with a few more from a few other notable breweries.