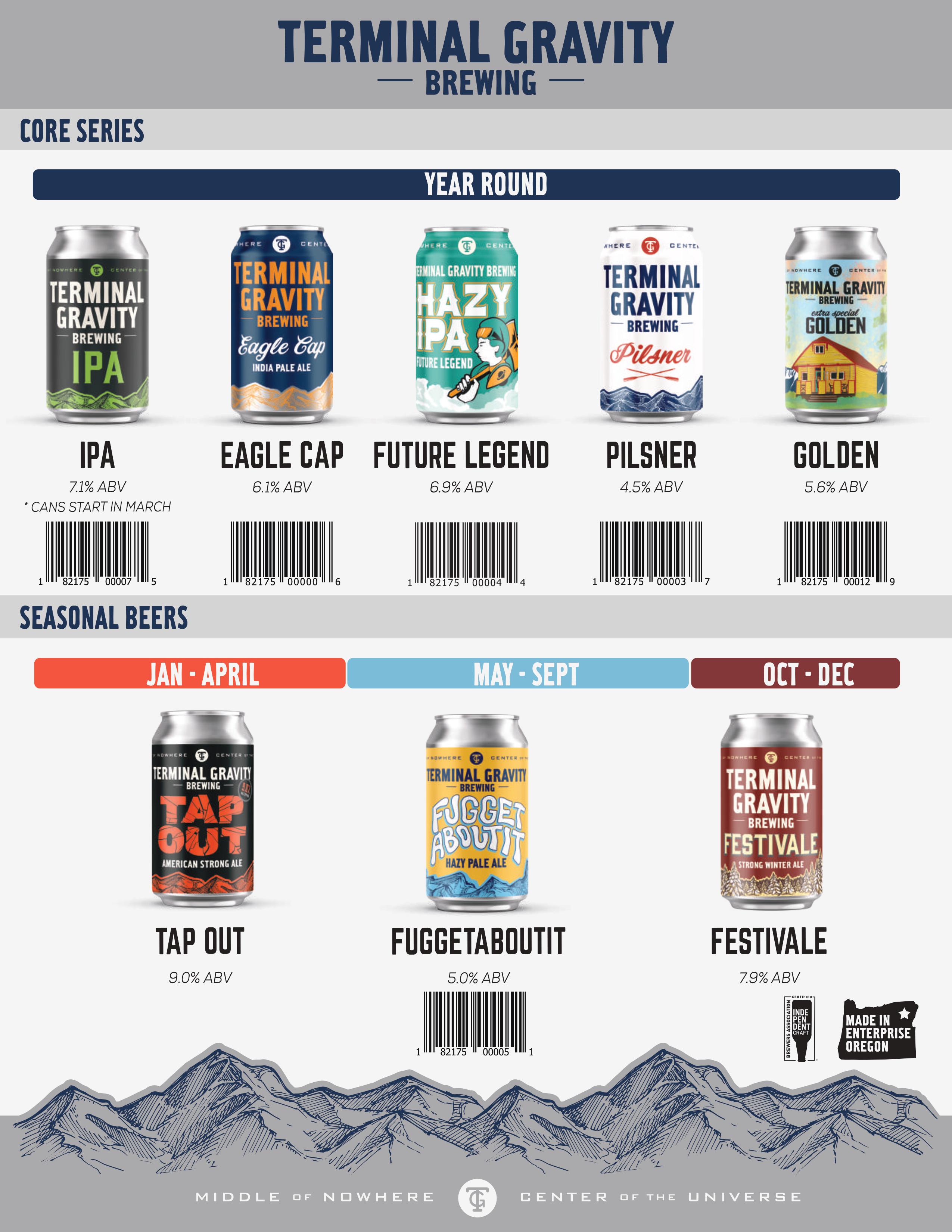 Brewing beer in Northeast Oregon since 1997, Terminal Gravity Brewing has announced its 2021 Beer Release Calendar. In addition to this news, Terminal Gravity will transition from glass bottles to 12oz cans for its entire lineup of packaged beer. Prior to this month, only a few offerings were canned, while the brewery’s core lineup was bottled.

Up until this year, the Enterprise based brewer packaged many of its popular offerings such as IPA, Tap Out Strong Ale, and Festivale Winter Strong Ale in 12oz bottles, but now this lineup will only be packaged in aluminum cans. Both IPA and Tap Out will be hitting shelves in this month, and expect to see Festivale come October for the winter season ahead.

The new cans will still have their classic branding from the bottles, with the exception of Tap Out, which will receive a brand refresh. The fan-favorite American strong ale now has bold red lettering to go along with the beer’s high alcohol content will be available through April. Other seasonal beers include Fuggetaboutit Hazy Pale Ale and the previously mentioned Festivale. In addition to IPA, canned year-round beers include Eagle Cap IPA, Future Legend Hazy IPA, Pilsner, and Golden.

According to today’s press release, this transition to solely cans was planned over one year ago. Terminal Gravity sees this transition as a catalyst for higher beer quality, operational efficiency, and ultimately, growth. Selling their bottler means the quality assurance and packaging teams can focus on canning, and it opens up much-needed space in the brewery. Terminal Gravity has seen the market demand trend towards cans over bottles for the last few years, making the switch a more obvious choice.

“We purchased a canning line and packaged our first canned beer, Eagle Cap IPA, in 2017, and have seen all our canned beers take off from there,” said Natalie Millar, General Manager/CFO of Terminal Gravity, in a statement. “Meanwhile, our bottle sales have flat-lined or slumped. We’re finding more and more customers want their beer in a can along with our distributors and retail partners.”

The often-discussed benefits of cans include the portability and versatility for the outdoors, their lower cost to store and ship, their lighter weight compared to bottles, and their stackability in refrigerators, which store owners prefer.

Terminal Gravity’s switch to cans comes at a time when the supply chain for aluminum cans is fractured. Many independent breweries have had a hard time securing cans due to the increased demand during the last year. That’s why for all Terminal Gravity cans, customers will notice ridges on the top. The retro-looking cans offered the brewery the best chance for a consistent supply.