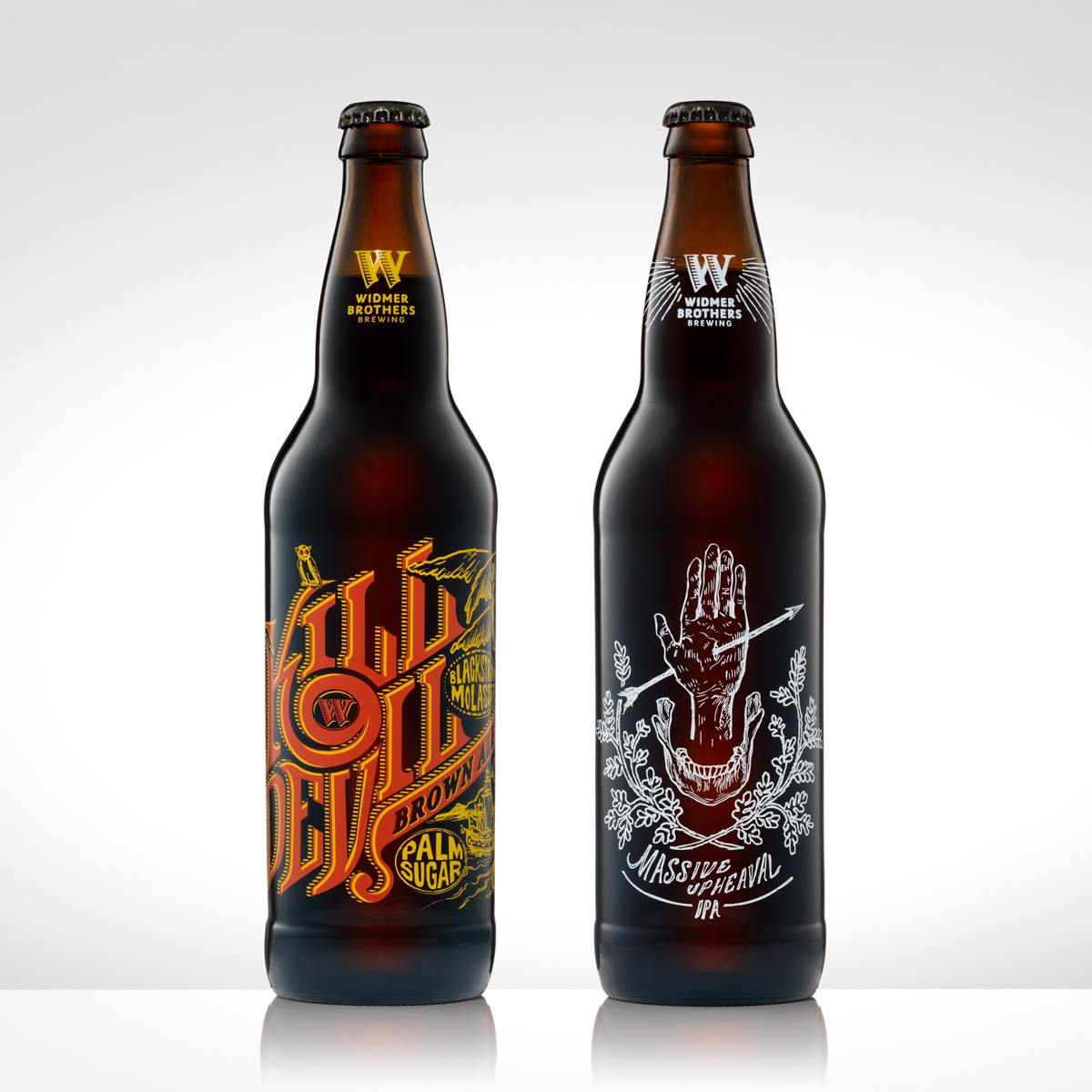 Back in April 2014 Widmer Brothers Brewing launched a massive project in its 30 Beers for 30 Years Series. This project that coincided with the brewery’s 30th Anniversary highlighted a beer from each of the brewery’s 30 years. Now with 28 beers in, Widmer releases its final two beers in this year long series, Kill Devil Brown Ale and Massive Upheaval IPA.

What began one year ago, Widmer’s 30 Beers for 30 Years Series was an ambitious project that created a beer from each year of Widmer’s 30 year existence. Every month over the course of the past year Widmer Brothers brewed significant recipes in small batches at the innovation pilot brewery at the Rose Quarter, each representing individual years in the brewery’s history. Now with the release of Kill Devil Brown Ale representing the year 2012 and Massive Upheaval Imperial IPA representing the year 2013, closes out this year long series.

Plus what made this 30 Beer Series so unique is that each and every beer featured unique label art from 30 different artists and graphic designers from the Portland area. Each artist selected chose a beer, learned about its origins, and created their own graphic interpretations in the form of a bottle label for the 22 ounce beer.

In total, thirty different beers were brewed and bottled at the brewery’s 10-barrel pilot brewery. 30 artists were commissioned, creating 30 unique pieces of art. Bottles were released monthly in batches of two to four, and 30 cases of each beer were distributed in the Portland area only from April 2014 to April 2015.

“It is bittersweet to see the 30 Beers for 30 Years Series come to a close,” said Kurt Widmer, co-founder of Widmer Brothers Brewing. “Initially Rob and I were hesitant to have a big anniversary celebration, but I’m glad that we did the series. On one hand it was a lot of hard work and coordination for the team, but on the other hand, it was a really fun trip down memory lane, and a huge honor to see the vision come to life. We are proud that our team accomplished such an ambitious undertaking.”

For the last two releases in the series, Widmer Brothers brewed two of the biggest beers in the series. Kill Devil Brown Ale – a rum-barrel-aged imperial brown ale brewed with palm sugar, two kinds of molasses, and Calypso hops – was originally released as part of the Brothers Reserve Series in 2012.

Massive Upheaval IPA is the last beer in the series and the second series release that wasn’t previously brewed and distributed in some fashion. Massive Upheaval is a look to the future as Widmer Brothers took the recipe for Upheaval IPA, which was developed in 2013 and released in the year-round lineup in February of 2014, and brewed a bigger, imperialized version for the 30 Beers for 30 Years Series.

Samuel Robinette of Accidental Color created the Kill Devil Brown Ale label, and John Fish of This is Folklore created the Massive Upheaval IPA label. The two labels, and all label art from the series, can be found at 30Beersfor30Years.com.

Here are more details on each of the two beers.

Kill Devil Brown Ale – 2012
Whiskey barrel aging had become commonplace by 2012, so we looked to the next frontier and did some extensive digging to acquire used rum barrels from Puerto Rico. We decided to play off the theme of rum and brew a big brown ale using two different types of palm sugar, and two types of molasses, Black Strap and Sweet Barbados. The name refers to a historic term for rum, Kill Devil. 9.5% ABV

Massive Upheaval IPA – 2013
In 2013, we began brewing an unfiltered, unexpected, unapologetic and uncompromised IPA called Upheaval IPA. We’ll be launching this beer in early 2014. For the 30 Beers for 30 Years project, we’ll brew a bigger, bolder, badder version of Upheaval to celebrate the launch of this new year-round IPA.