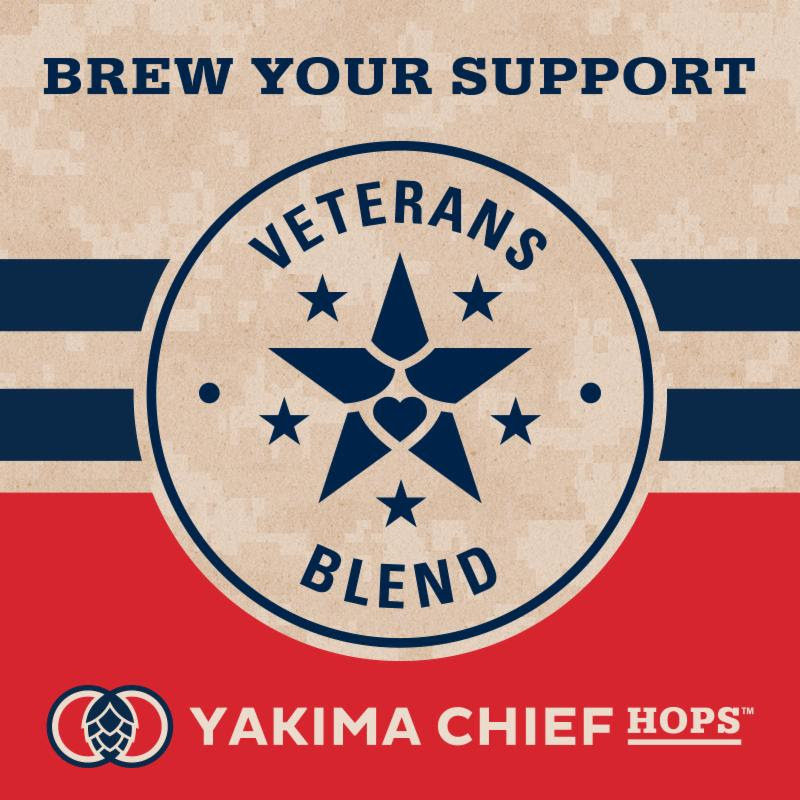 Yakima, WA, USA – July 1, 2019 – Yakima Chief Hops, a global hop supplier for the craft beer industry, has launched the pre-sale of their 2nd Annual Veterans Blend, as they build on the tradition of supporting the Veteran community through this proprietary hop blend. Brewers are encouraged to brew celebratory beers with the blend, which has sparked an exciting movement across the industry.

The Veterans Blend was inspired by the military Veterans of Yakima Chief Hops, as they were seeking a way to give back and honor their fellow servicemen and women. Each year, the Veterans Blend recipe is hand-selected by a group of Veteran-owned breweries from across the US, representing multiple branches of the military. The Veterans Blend is exclusive to YCH and sold as traditional T90 hop pellets in both commercial and homebrew packaging. The group of participants also decide on a different mission-driven nonprofit organization to receive a donation of $3 per pound sold of the Veterans Blend.

“The Veterans Blend is a great way for us to give back to the community,” says Jonathan Sikes, YCH Regional Sales Manager and former Infantry Rifleman for the United States Marine Corp. “A lot of Veterans have found a career in the brewing industry. In addition to supporting worthwhile nonprofit organizations, the Veterans Blend also illuminates career opportunities in a growing industry, for Veterans who may be trying to find their niche after serving, or even just an outlet for creativity and passion through a hobby such as homebrewing.”

In its first year, YCH contributed more than $24,000 to the Semper Fi Fund through the sale of the 2018 Veterans Blend. The blend has inspired breweries across the US to show their support for military Veterans and create hoppy brews in their honor using the unique blend of hops. The project has been met with an incredible amount of enthusiasm and appreciation from all members of the beer industry, from hop growers to beer drinkers, all with a passion for supporting the men and women of the US Armed Forces.

The blend has also facilitated a connection between military Veterans in the hop and brewing industries, as hop growers, YCH staff and brewers who have served collaborate to make this annual blend possible. The Veterans Blend connects heroes from field to pint, and supports YCH’s mission to connect family hop farms with the world’s finest brewers.

“We hope to celebrate Veteran’s Day with this blend every year,” says Kevin Ryan, CEO of Service Brewing and former Infantry Officer for the United States Army. “We host the Victory Moto Show at the brewery during that week and release the beer at that event, raising money for our selected charity at that time. I hope we can use this blend to provide substantial assistance to deserving charities, bring more Veterans in the brewing community together, and demonstrate how Veterans can succeed in Craft Beer.”

The 2019 Veterans Blend recipe includes a well-balanced mixture of Ahtanum®, Ekuanot®, HBC 472, Loral® and Simcoe®. Providing a beautiful mix of floral, tropical fruit and citrus aromas, the blend creates a hop pellet with a much wider range of flavor characteristics than could be provided by any one variety alone.

The release of the Veterans Blend is timed accordingly, as commercial brewers are encouraged to purchase the blend by September, in order for the hops to be shipped in time to brew and pour celebratory beers by Veterans Day on November 11th. The Veterans Blend will also be available in homebrew packaging in early Fall and homebrewers are encouraged to participate in a celebratory Brew Day on November 11th in honor of our Veterans.

Yakima Chief Hops will donate $3 for every pound sold to this year’s chosen nonprofit organization, the Wounded Warriors Family Support fund, which is dedicated to providing support to the families of those who have been wounded, injured or killed during combat operations.

Commercial brewers can submit an order form at yakimachief.com/veterans. For wholesale orders, distributors can contact hops@yakimachief.com. Homebrew retailers can reach out to Country Malt Group – Homebrew and LD Carlson to stock their shelves. Homebrew customers can shop their local homebrew stores, or shop online at yakimachief.com/shop.