It is nice to imagine traditional craft being passed down from one generation to another; father or mother teaching a trade to their children. But what if your craft is brewing beer? And what if, like so many in today’s microbrew industry, brewing is not something your parents or grandparents did, but is new to your generation? Pioneers of this modern beer industry rely on the knowledge of predecessor and mentors, but also trend towards openly collaborating and sharing information with colleagues- a number of whom happen to be siblings. Examples of brothers in the beer industry are bountiful. Here in the Pacific Northwest, brothers have had a significant hand in helping to build our rich and diverse brewing community; consider the familiar family names of McMenamin, Maletis or Widmer brothers.

Another pair of local brothers who share not only familial ties but also a common love of beer is Chris and Tim Ensign. While neither is a professional brewer by trade, they each have made their own contributions to and continue to help shape the Portland beer scene. In a sea of beer geeks and connoisseurs what makes the Ensign brothers stand out? Perhaps you’ve seen them. These two are not the type of guys you tend to miss. Both stand well over six feet tall with broad shoulders, chests and legs. Both are fans of the type of permanent ink Portlanders are known well for. Tim has short, curly brown hair while Chris has slightly darker hair, a deeper voice and boasts a beard ZZ Top would be envious of. It’s safe to say they have their own notable presence; not only in physical stature but in the way they unassumingly invite your attention. The Ensign brothers are happy to strike up a conversation with anyone about anything related to beer. If it’s been brewed and they’ve had access to it, they likely have tried it and probably even remember what it tasted like. 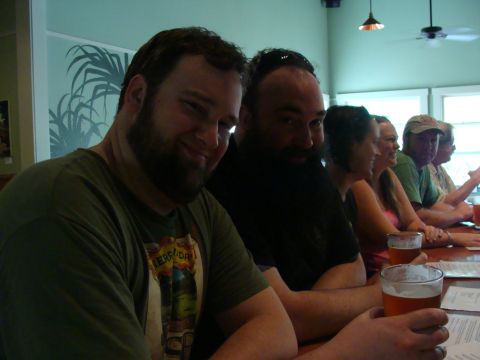 Chris, or “King C” as he is is well know to bar patrons and friends, is the older of the two brothers by four years. Chris initially debuted into the beer world in his late teens, stocking beer at a local deli in San Jose, California. Years later, he attended college in Humboldt, California where he ultimately found himself behind the bar at a local pizza parlor/nightclub with a notable draft line-up. This is where his first schooling in bartending took place. During this time, Chris began gathering the type of experiences that would help to fuel a life long passion for beer- attending beer tastings, beer festivals and starting to homebrew. Chris began truly appreciating the craft beers of Northern California and meeting some of the brewers who made them. His growing love for beer was further fueled by experience in the brewery, working on the bottling line at Humboldt Brewing in Arcata, California. After graduation, Chris returned to San Jose for a brief time where he shared his growing love of beer with his brother Tim. 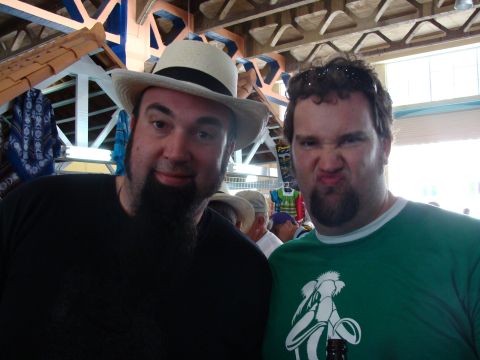 While Chris had been away, Tim had been making his own debut into the retail end of the beer market- breaking down pallets, stocking and building beer displays at Trader Joe’s in San Jose, California. During a brief reunion when both Ensign brothers lived in the South Bay (post graduations) they shared banter about life, beer and many TJs contract brewed micros (ie, Jumping Cow, Fat Weasel, Billy Goat Bock, etc). The brothers bond over beer was solidified. While Chris remained passionate about beer, the actuality of getting a “real” job post graduation set in and his career swerved in a different direction for a time.

Tim’s trek into the beer world deepened greatly upon moving to Chico, California in the mid-nineties. Living in the hometown of Sierra Nevada Brewing, Tim expanded his knowledge of merchandising, purchasing and the retail end of the beer world, running a beer department at the local natural foods store. He began to find pleasure in enjoying a wide range of craft beers and sharing his growing enthusiasm with customers. Here he was influenced by initial meetings with knowledgeable beer sales reps and introduced to long-time friend/brewer, Dave Curry (who currently brews at Waimea Brewery in Kauai). While in Chico, Tim also began homebrewing and spent some time working on the bottling line at Butte Creek Brewery. During these years, the Ensign brothers continued to expand their malt and hop palates by attending beer festivals and getting together for solid bar sessions. What better way for siblings to bond than over craft beer? 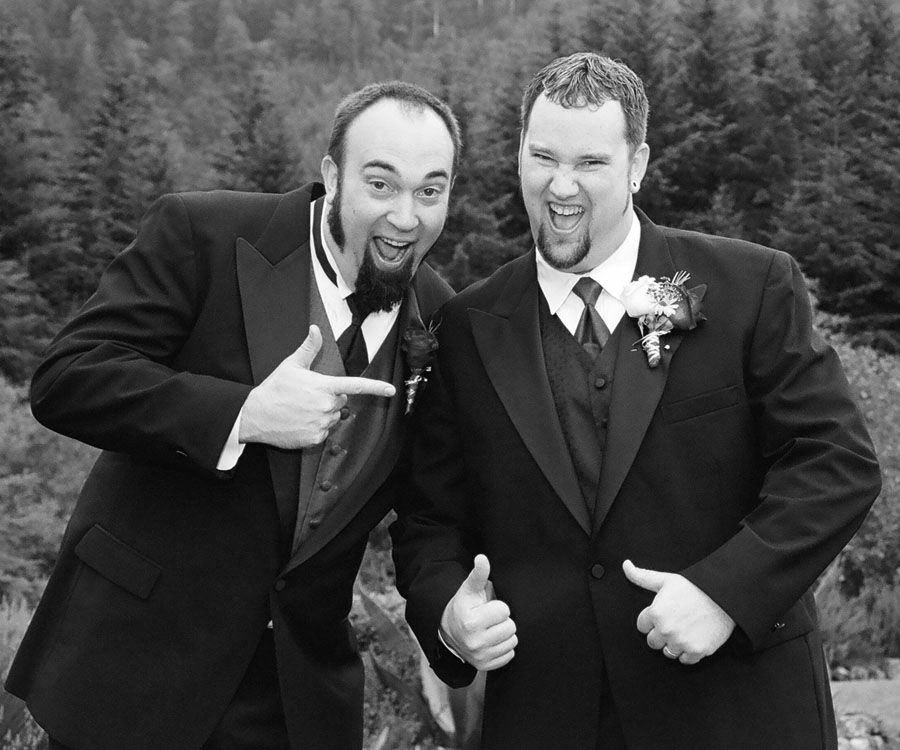 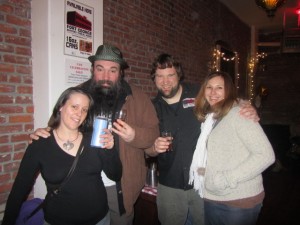 In 2001, Tim moved to Portland, Oregon. When a beer sales rep job fell through, he returned to Trader Joe’s for a brief period before launching his beer career in the Pacific Northwest. In 2002, Tim began working for Mt. Peoples Organic Wine & Beer Distribution (as their only Portland Sales Rep), Lucky Labrador Brewing Multnomah Village Public House and Belmont Station. That same year, after some encouragement from his brother Tim, Chris was ready to leave the Bay Area and also came north to make a fresh start in the City of Roses. Chris joined Tim at the Multnomah Village Public House and again the brothers were united in beer. Tim’s career with Mt. Peoples eventually expanded, filling the time that his other jobs had consumed. He followed this path for nearly a decade. After four years he was promoted to Sales Manager and eventually to Oregon Manager. Meanwhile, Chris continued to build a local following becoming an “famous” Portland (beer) bartender making an unending list of notable connections in the community. Chris stayed with Lucky Labrador for just under five years moving from the West to the East side pub. He also tended bar at such local favorites as the Rose & Raindrop (now closed) and the Green Dragon Bistro & Pub. Chris can now be found behind the bar at two of Portland’s most legendary drinking establishments, the Horse Brass Pub and Apex Beer Bar. While his brother Tim, has very recently ventured out to start his own beverage brokerage company, Powered By Yeast. 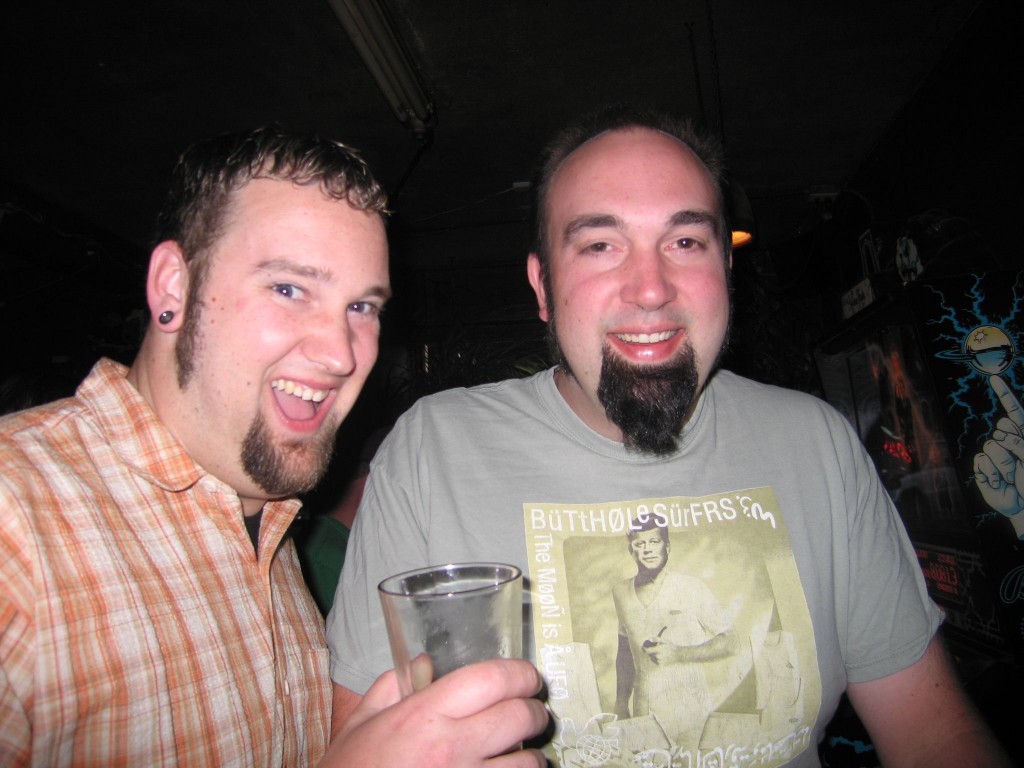 Both brothers say it is great to have a brother in the industry- someone to talk beer with, brew beer with and of course share a beer with. Independently, they both also tell me that they love the Portland beer scene. They feel we live in one of the most vibrant brewing communities in the world. Neither believe our local market has become “over saturated” with breweries or beer, but both strongly echo the importance of continued creativity, innovation and originality.

Come join these “Brothers in Beer” to celebrate their April birthdays this Friday, April 15, 2011. Thanks to Fort George Brewery and Apex Beer Bar we will be raising funds for the relief effort in Japan. The party starts at 6:30PM at APEX beer bar, 1216 SE Division St, Portland, Oregon.