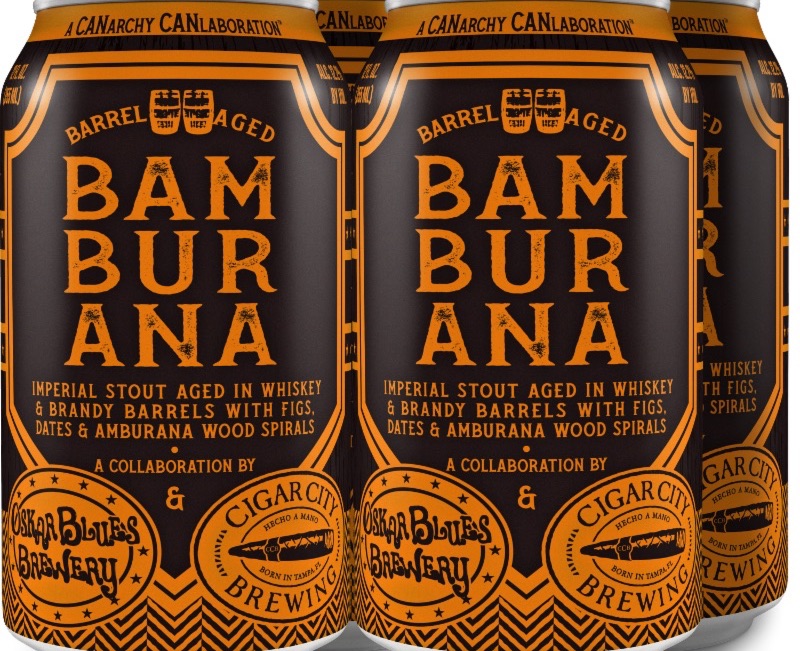 Bamburana is an imperial stout, brewed with figs and dates, and is then double barrel-aged in both whiskey and brandy barrels, and aged once more in tanks with Amburana wood spirals. The beer is a big one at 12.2% ABV. Bamburana is the first nationally distributed collaboration between the two breweries and will be released in 12oz cans in mid-January.

Bamburana is the co-creation of two giant craft beer personalities – Oskar Blues Brewery’s Head of Brewing Operations, Tim Matthews, and Cigar City Brewing’s Brewmaster Wayne Wambles. Their goal was to craft a brew that would marry the flavors of double-barrel aged imperial stout and Amburana wood. Amburana wood is an indigenous South American wood that imparts unique warm and savory flavors and aroma.

“We were excited to see the results of infusing Amburana wood into a big, barrel-aged imperial stout,” said Wambles. “We were pleasantly surprised with the vanilla and gingerbread spice nuances this South American wood contributed into the finished beer and look forward to putting this delicious beer in front of folks!”

“We’re both known for barrel-aging big, malty, dark beers,” added Matthews. “The culinary goal of this project was to match the flavors of a rich candy cookie with fig filling and gingerbread spice. We spent a bunch of time selecting the right figs and dates to hit exactly the right flavor notes, lend a slight stickiness and cut into the rowdiness of the Amburana wood.”

Bamburana unfolds on the palate with forward-facing roasted malt flavors that branch out against a dark fruit backdrop of figs and dates. Then, brandy and whiskey accents make themselves known with complex boozy-and-sweet flavors, complementing the warmth and spice of Amburana wood.

Bamburana will be available nationwide in mid-January in 4-packs of 12oz cans.