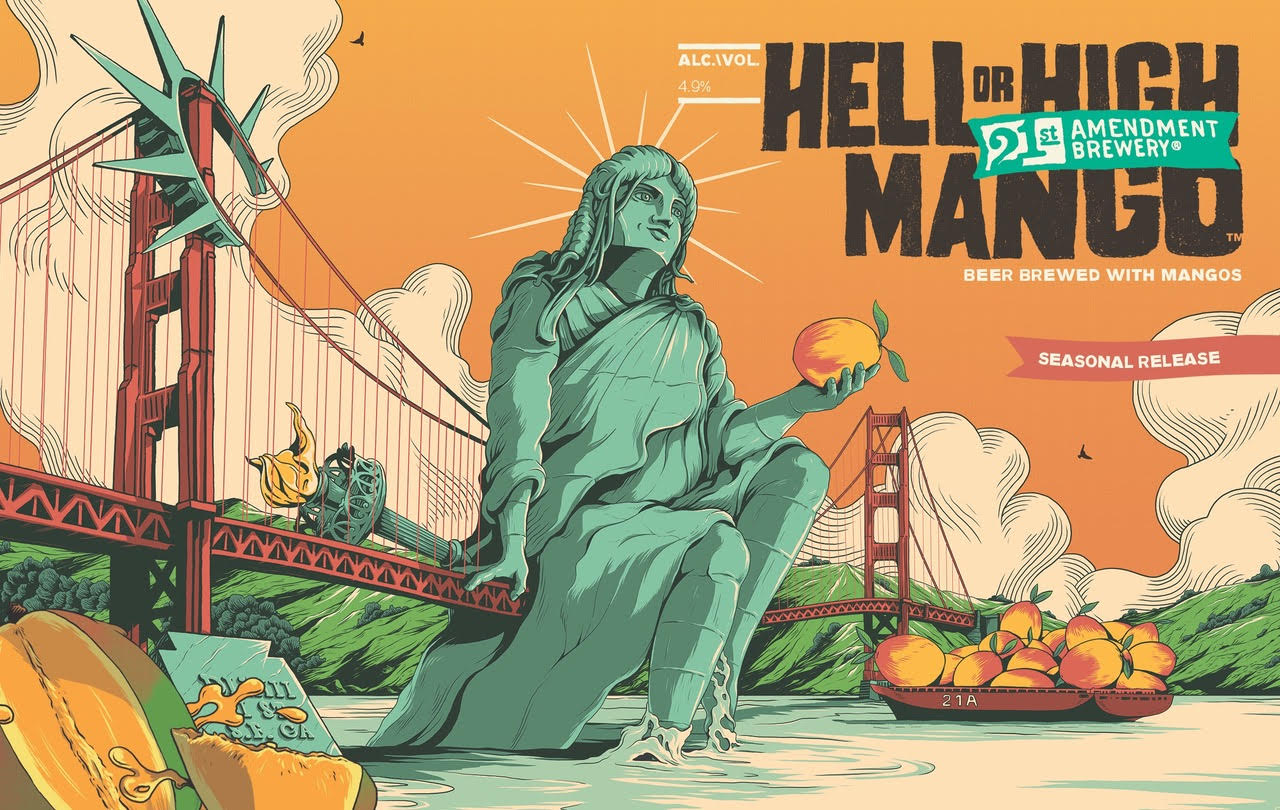 San Francisco, Calif. — Tuesday, September 28, 2021 –– The 21st Amendment Brewery releases the autumn seasonal Hell or High Mango nationally to 33 states this month following the summer craze for its beloved Hell or High Watermelon Wheat. Lady Liberty shines bright at our sunset gate with welcoming arms for a sweet transition into the glow of the orange and red leaves of fall. An iconic woman symbolizing freedom and inclusivity, the Statue of Liberty graces the Hell or High line’s packaging and cans year-round. Brewed with real mangos, Hell or High Mango eases us from warmer days to an oasis brimming with tropical floral aromas and slightly tart, fruity flavors.

“Hell or High Watermelon Wheat has been a summertime favorite since we first started brewing it in 2000 at our San Francisco South of Market brewpub near the SF Giants’ ballpark. With such an overwhelming response to Hell or High Mango’s first year of release in the autumn of 2020 we’re especially excited to bring it back. The Instagram and social media comments were super positive, people are really digging this one. What’s also great about this beer is that behind all that luscious mango flavor and aroma is a wonderful wheat beer with its biscuity, light bready notes. And at a mere 4.9% ABV, Hell or High Mango is the perfect companion to enjoy all fall season. Get some,” says Shaun O’Sullivan, Co-Founder and Brewmaster.

AmericanCraftBeer.com notes, “Another tasty example of the brewery’s commitment to fruitful brewing, Hell or High Mango is a 4.9% ABV mango-infused Wheat Ale brimming with floral tropical aromas and tart, fruity flavors.” UPROXX says, “I love 21st Amendment Hell or High Watermelon (they also have some new flavors like mango). They feature Lady Liberty, and the fruit is subtle and in balance. It’s a crisp beer with a hint of fruit.”

Hell or High Mango is yet another testament to 21st Amendment’s ingenuity at brewing delicious expressions of flavors where fruit, hops, and grains intermingle for a splendid drinking experience. Hell or High Mango is an American wheat beer bursting with mouthwatering yumminess that finishes clean and refreshing.

Hell or High Mango is available now in all 33 states where 21st Amendment distributes. Due to high demand for Hell or High Mango, 21st Amendment extends its seasonal availability to four months on shelves and on draft nationwide through December 2021. For more information and to find some using their beer finder, please visit www.21st-Amendment.com.

About 21st Amendment Brewery
21 years ago (established in 2000), Nico Freccia and Shaun O’Sullivan opened the doors to the 21st Amendment brewpub in San Francisco’s historic South Park neighborhood. In addition to quickly becoming one of the city’s favorite pubs, 21st Amendment began expanding beyond the Bay Area by helping to pioneer the movement to canned craft beer. Known for their witty names and delicious brews, 21st Amendment offers year-round selections, as well as seasonal offerings and their infamous once-in-a-while limited-edition releases. Sold in 33 states plus Washington D.C., 21st Amendment produces beer in its state-of-the-art brewery headquarters in San Leandro, California and is among the top 50 craft beer brewers in America.