In honor of Women’s History Month, AleSmith Brewing Company has brewed Fearless IPA. This celebratory beer was brewed by the women of AleSmith and celebrates all women in the craft beer industry with this new West Coast-Style IPA.

Fearless IPA will be available in 4-packs of 16oz cans that will feature a label showcasing the intricate designs of local artist Mary Jhun beginning on Saturday, March 26th at the AleSmith Tasting Room.

This brew is a collaboration between the ladies of AleSmith and their production team to create a crushable American IPA. With the additions of New Zealand hops Kohia Nelson and Southern Cross, this IPA features tropical hop flavors of passionfruit, guava, and lychee painted on a simple malt bill with light notes of caramel and a touch of bread and biscuit.

For the 2022 Women’s Day Brew, AleSmith has partnered with local artist, Mary Jhun. Known for surreal paintings out of her studio in Barrio Logan, the arts and cultural district in San Diego, Jhun is well versed in Surrealist Automatism, a method of art working directly from the subconscious without a planned approach. She refers to her work as “emotional self-portraits of a day remembered” for that the method allows the pieces to be thumbprints of haunting memories that delve into the beauty of life, death, and the journey between.

Inspired by the message of empowerment in the popular TikTok song “I Am Woman” by Emmy Meli, AleSmith chose the name “Fearless IPA” for their Women’s History Month beer. The craft beer business is a male-dominated industry, presenting obstacles for women and non-binary people to get into the field. “We want to recognize and celebrate the strength, resilience, and impact of those who are working towards or are currently in this industry” says Kristen Ballinger, Marketing Manager at AleSmith Brewing Company. “What better way for us to celebrate than to collaborate and brew a beer with the amazing women that work at our company.”

AleSmith asked Jhun to choose a piece of her art that best fits the “Fearless IPA” name. She says, “Dyad, a painting about the power of two becoming one amid life’s hardships, was one of my choices for the term Fearless. Aside from its unity and balance of the two lovers, it also represents two sides of the same heart. Often, we don’t recognize the strength of people when we see just one side to them, to be able to look deeper and see the impact the different versions of ourselves play, we become better humans for it.”

To Jhun, “Fearless represents strength, it’s the ability to see beyond what “is” and to ask why, and to not be afraid of changing perspective.”

Fearless IPA will be available at AleSmith’s tasting room in 16oz can 4-packs starting March 26th! 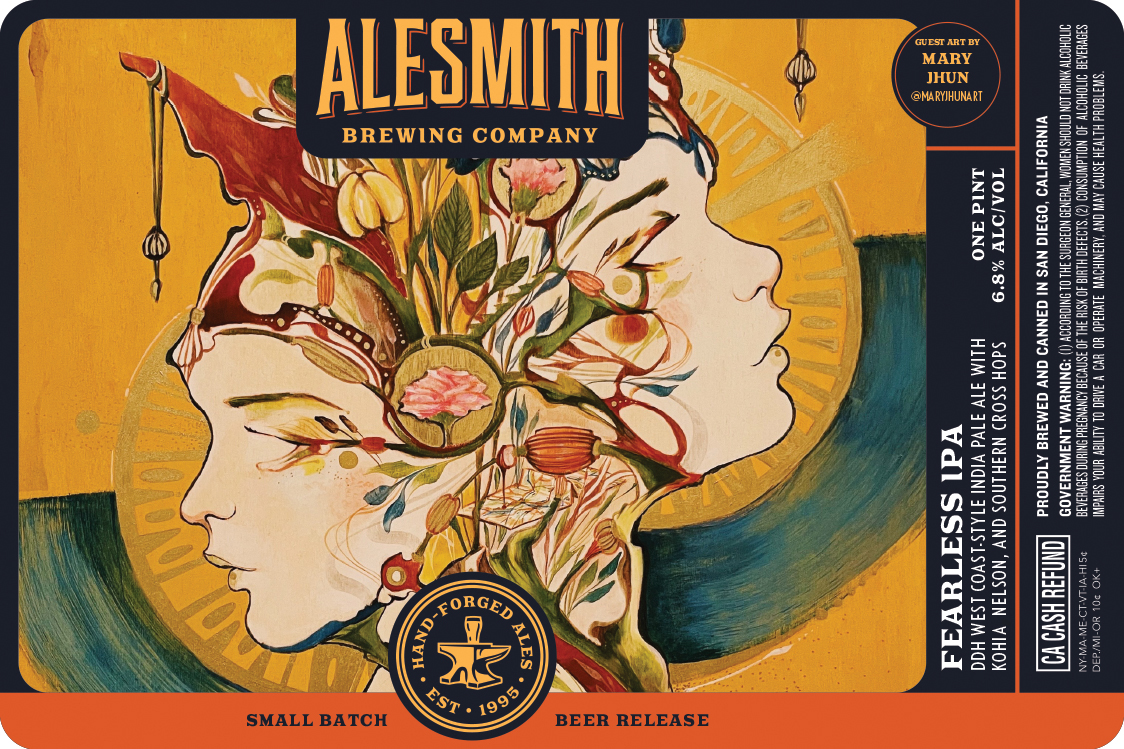 About AleSmith Brewing Company:
Forged in 1995, AleSmith has been recognized by consumers and critics alike as one of the world’s foremost craft brewing companies, with accolades that include medals won at prestigious national and international beer competitions. In addition to being well-established within its hometown of San Diego, AleSmith was acknowledged by the RateBeer community as one of the Top 10 Best Breweries nationwide in 2019 and 2020. The brewery is also a three-time winner of the Champion Brewery Award at the San Diego International Beer Competition, where it received a Gold Medal in 2019 for Nut Brown English Brown Ale. Further recognition for individual beers includes a 2016 Gold Medal for Old Numbskull, and a 2017 Bronze Medal for Wee Heavy at the Great American Beer Festival. AleSmith occupies a 109,942 square-foot facility with a state-of-the-art brewery. AleSmith’s range of acclaimed beers includes Speedway Stout, Nut Brown Ale, and San Diego Pale Ale .394, distributed in 28 U.S. states and eight countries.

About Mary Jhun:
Mary Jhun was born in Cavite, Philippines in 1989 and moved to the States in the mid-‘90s. Her struggle with English and making friends as a kid was what pushed her need to draw when she was in elementary school. “I gave a drawing of a bird to a boy when I was eight and he became my friend without me saying a word. That was when I knew I wanted to use art first and foremost as my voice.”

The girls and beings that constantly carry Jhun’s work throughout the years act as a vase to all her memories and the stories of others. A result of a 15+ years of obsession of coping traumatic experiences, the girls have been the main focus of her documentation of surviving everyday life, past and present. Interlocking our psychology to biology of plants & architecture, Jhun creates stories through our deeper emotions. The girls represent an inner self, one that is culminated of many alternate versions of what is or can be. Most days, Jhun calls them the girls, however, they represent more so a feeling, a timeframe, and a product of a certain reaction.