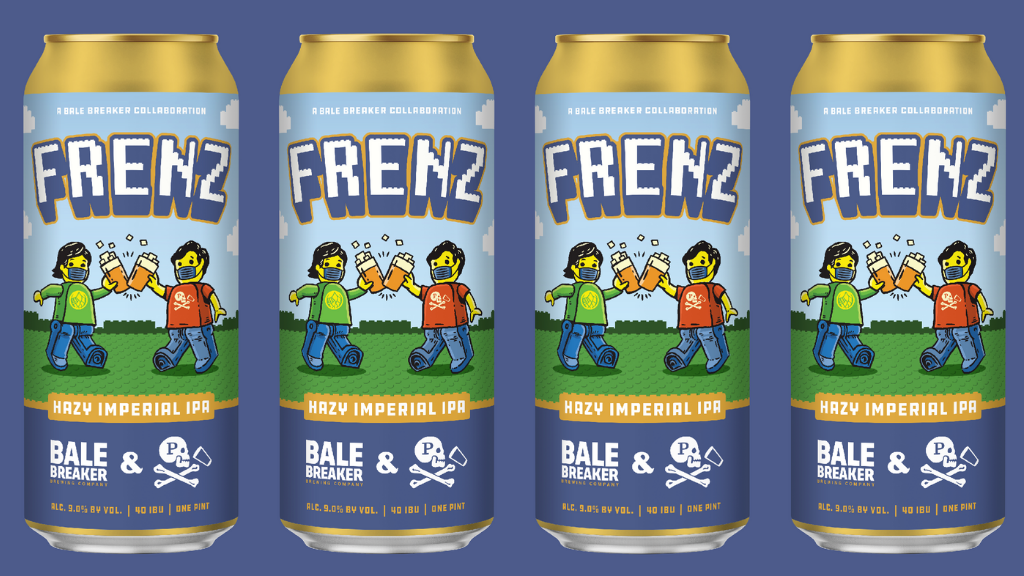 Yakima, Wash. – February 12, 2021 – Bale Breaker Brewing Company, a family-owned brewery located in the beautiful Yakima Valley, today announces the launch of their newest limited release series: Frenz, a series of collaborative beers with their peers in the brewing industry.

The series kicks off with an Imperial Hazy IPA made in collaboration with Austin, TX brewery Pinthouse. The two breweries worked together to craft a recipe for a beer that would be brewed true to the Pinthouse style but with all Bale Breaker’s homegrown malts and hops.  Same recipe, same ingredients, two different brewhouses.  Bale Breaker’s version of this Imperial Hazy clocks in at 9% ABV and features Bale Breaker’s homegrown Simcoe®, Citra®, Sabro™ hops, giving off aromas of tropical fruit & citrus.

“This series is made to share the love between us and our hop-obsessed beer buds,” says Bale Breaker brewmaster & co-owner Kevin Smith. “We’d love to have gone down to Texas or had the guys up here in Yakima, but brewing the same recipe from apart felt almost like being in the same brewhouse.” The series is made to “drink with frenz”, but for now, a virtual cheers will have to do.

This new release will be available at Bale Breaker’s Yakima, WA taproom starting on Thursday, February 18th from 3-6pm in 16oz 4pks to-go at their weekly curbside pickup hours and online for WA customers. Pinthouse is releasing their version of Frenz that Saturday at their Austin, TX location. Frenz 16oz 4pks will be getting limited distribution in early March throughout Washington, Oregon, and Idaho at select bottleshops and stores.

About Frenz No. 1 Hazy Imperial IPA
This collaboration hazy IIPA with Pinthouse was designed for you to drink with frenz. Coming in at 9% ABV, you may want to grab a buddy to share a can with. Aromas of tropical fruit & citrus. Low bitterness, full body, slightly boozy.