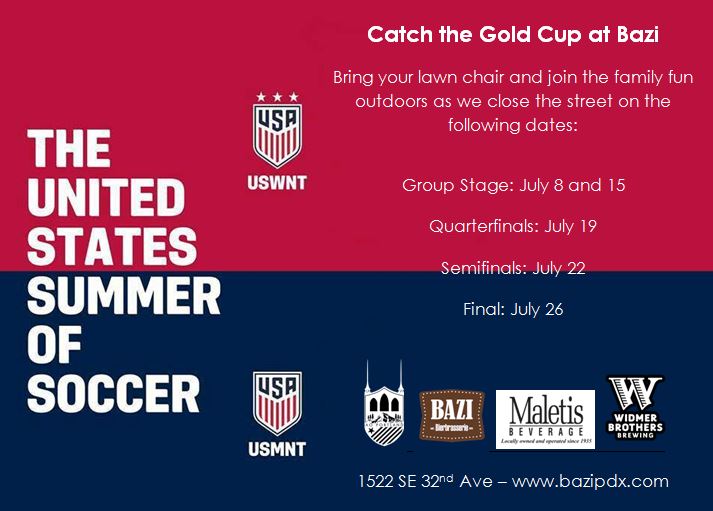 As the official home of AOPDX, you can expect to catch every US Men’s National Team (USMNT) match on Bazi’s 114” HDTV with sound throughout the Gold Cup. In addition, Bazi will be closing the street on July 8, July 15, July 19 (Quarter Finals), July 22 (Semi Finals), and July 26 (Final). Guests are encouraged to bring their own lawn chairs and enjoy the match inside and/or outside. These viewing parties are family friendly. Well behaved pets are also welcomed outdoors.

Widmer Bicycle Kick Kolsch. 5.5% ABV, 35 IBU, made in collaboration with AOPDX members and Bazi staff, this light and crisp beer is a thirst quencher for those hot summer days watching matches or after playing outdoors. Which player in the Gold Cup do you think has the best bicycle kick skills? The official beer release will take place on Saturday, July 8 prior to the 1:30 PM kickoff and will be available throughout the Gold Cup tournament.

During the Gold Cup, AOPDX will be collecting used soccer gear for the Oregon Special Olympics. Bins will be placed inside Bazi and located outside during the Outdoor Viewing Parties. Attendees are encouraged to bring used, but gently worn items to donate to this cause. Profits from the outdoor beer garden will also be utilized to purchase much needed gear for the Special Olympics soccer program. Volunteers are needed for the outdoor viewing parties and are encouraged to sign up here.

For more information about these and other events contact Bazi at 503.234.8888 or visit bazipdx.com

If Monks lived in Portland, this would be their watering hole. Bazi brings centuries of Belgian inspired beer and food under one roof plus a premium liquor selection. Explore with a nationally recognized Bier-Cocktail or simply sip on a glass of wine. As a Euro-theme establishment we embrace bringing community together through sports. We are an official Thorns, Timbers and American Outlaws partner and showcase these and other events on our 114″ HDTV with surround sound. Named “2016 Portland’s Best Soccer Bar” by The Oregonian, “2016, 2015 & 2014 Top 100 Beer Bars in America” by DRAFT Magazine and “2014 Top Beer Bars in Portland” by The Oregonian. Located in the heart of the Hawthorne District, tucked away just off of SE 32nd Avenue.