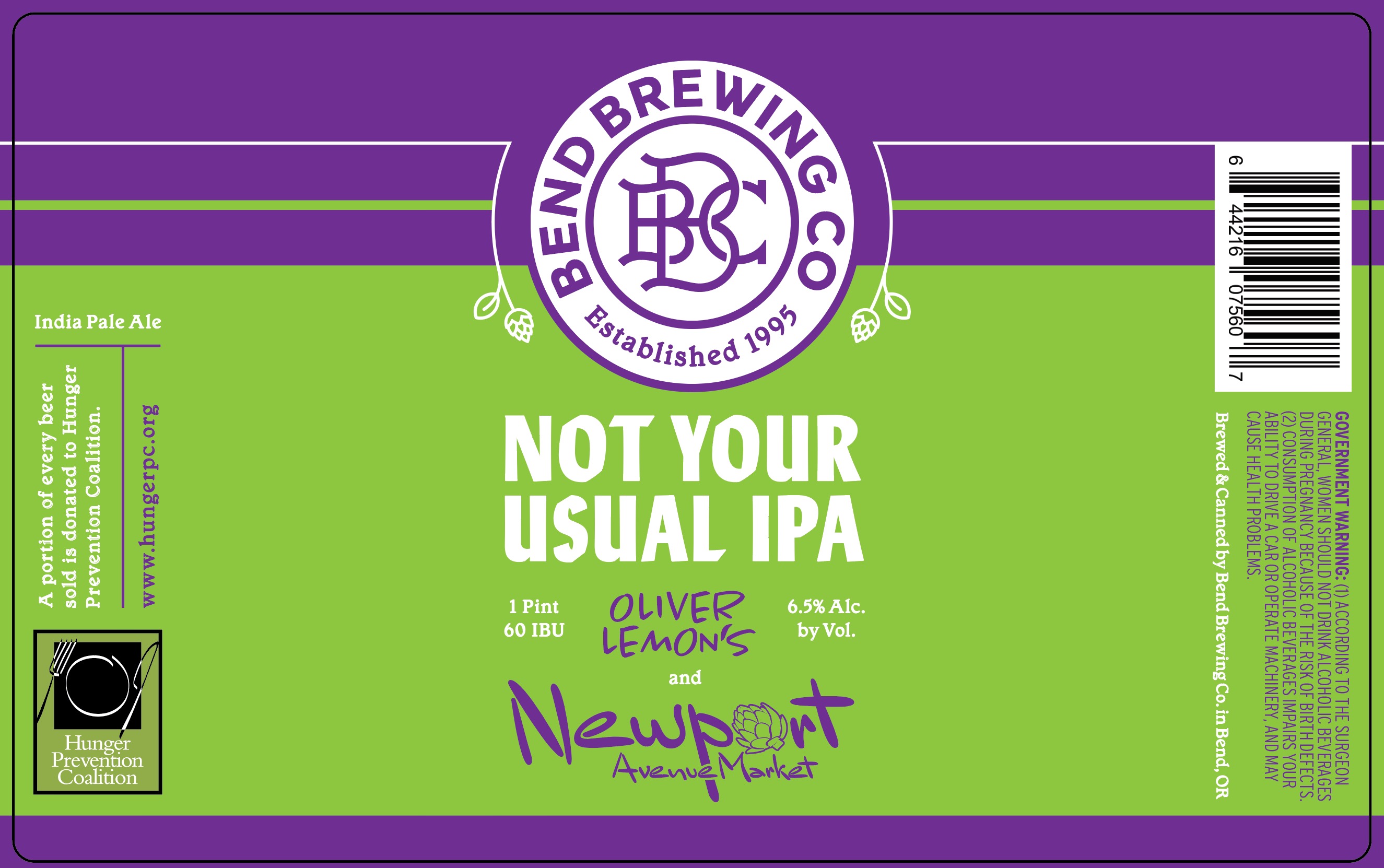 Bend, Or – March 17, 2021 – Two iconic Central Oregon brands, Bend Brewing Company (BBC) and Newport Avenue Market, have teamed up to create a limited-release beer to benefit the Hunger Prevention Coalition of Central Oregon. Titled “Not Your Usual IPA,” the beer will be a limited-edition 16oz can release on March 19, exclusively available at Bend Brewing Company, Newport Avenue Market and Oliver Lemon’s in Terrebonne and Sisters.

Newport Avenue Market’s Beer and Wine Manager Robert McCarthy worked with BBC brewers to develop the recipe.  “BBC has been a community meeting place for my family since we arrived in Bend. This beer is a true product of local collaboration and a dream come true,” says Robert.

Brewed with Comet, El Dorado, Azacca, and Amarillo hops, balanced by Munich and Caramalts, and weighing in at 6.5% ABV and 60 IBU, Not Your Usual IPA combines classic Northwest IPA hop flavor with modern “juicy” hops to create a beer that encapsulates the spirit of tradition and being on the cutting edge that Newport Avenue Market and Bend Brewing Company share.

“Robert and the entire Newport Avenue Market team have been huge supporters of BBC, so when the opportunity to come together on a new beer and support a great cause at the same time came about, it was a no-brainer,” says BBC Head Brewer Zach Beckwith. “We can’t wait to get this beer in front of people.”

This release marks the first collaboration between the two Bend-based companies, with $2 from every 4-pack sold donated to the Hunger Prevention Coalition.

“Not Your Usual IPA is our way of finding another fun and unique way to give back to our community,” said Lauren G.R. Johnson, CEO of employee-owned Newport Avenue Market, and Oliver Lemon’s. “It’s exciting to combine BBC’s 26 years and Newport Avenue Market’s 46 years of service to create a product that benefits local families.”

“Not Your Usual IPA” will be released on Friday, March 19, at BBC’s landmark location in downtown Bend, Newport Avenue Market, and Oliver Lemon’s in Terrebonne and Sisters.

About Newport Avenue Market
Since opening in 1976, Newport Avenue Market in Bend, Oregon, has been the No. 1 choice of Foodies in Central Oregon. A 100-percent employee-owned grocer, Newport offers shoppers both mainstream and hard-to-find food items as well as kitchenware and unusual gifts. A 21-time winner of “Best Grocery Store” in Central Oregon by The Source Weekly’s annual community poll, the market supports local producers, and offers an expansive selection of high-quality, in-demand food and beverage items, including 500 varieties of craft beer. For more details, go to www.newportavemarket.com.