Backbone Chocolate Espresso Stout will be Boneyard’s final seasonal for the 2016 calendar year.  Backbone is a rich, creamy espresso stout brewed with locally sourced “Cold Brew” from Backporch Coffee Roasters. Backporch’s vision spoke to Boneyard as they, “serve coffee in a way that honors the farmers who grew it.” 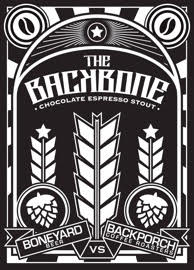 “About four or five years ago, we worked on a concept for a coffee beer and teamed up with Backporch Coffee Roasters to do this project,” said Tony Lawrence, Boneyard’s Founder/Brewmaster. “We use a gallon of Backporch Cold Brew Coffee per barrel with additions of chocolate and vanilla to give it its fun character.”

This rich, creamy stout combines three of our favorite things; Espresso, chocolate & beer.  Breakfast or dinner… It’s up to you! Backbone Chocolate Espresso Stout will be available the first week in October.

About Boneyard Beer
In 2010, Boneyard Beer was started in an old auto shop tucked away in the backstreets of Bend, Oregon’s historical district. Without any outside investors or major bank loans, Boneyard’s inception was unconventional to say the least. After decades in the brewing industry, owner Tony Lawrence built up a “boneyard” of old equipment he collected from 13 different breweries around the country. Alongside co-founders, Clay and Melodee Storey, this second-hand brewing equipment was pieced together to brew the first batch of Boneyard Beer in May 2010. Boneyard currently distributes draft beer in Oregon and Washington.