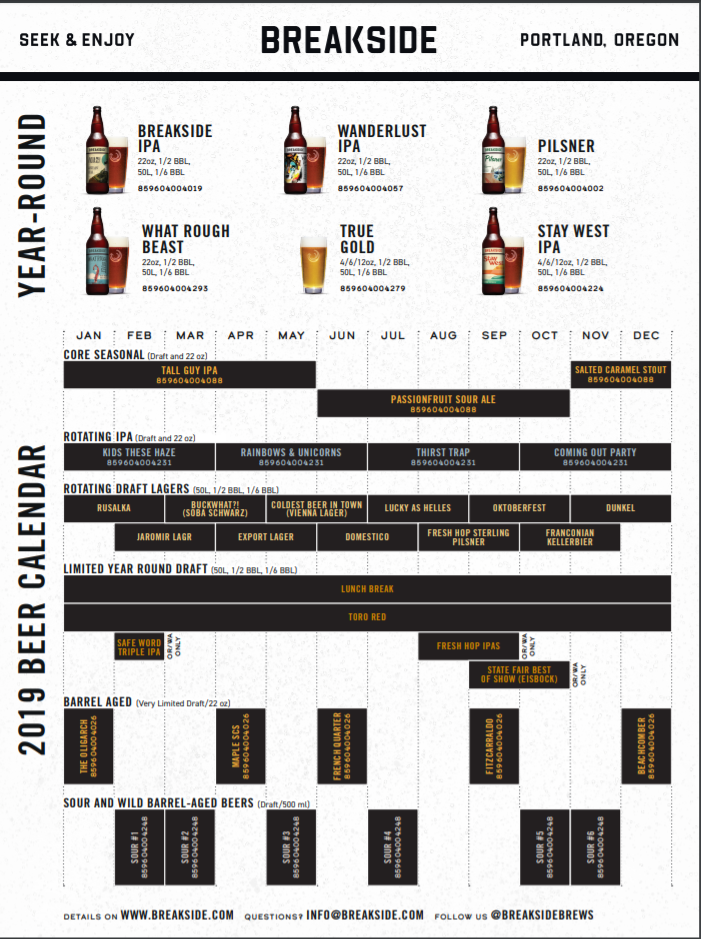 When it comes to releasing a large assortment of beers, one brewery that continues to do so is Breakside Brewery. The year 2019 will be no different as the brewer will once again demonstrate its ability to innovate and create a large variety of beers.

Many of Breakside’s popular beers return along with a few new beer series. One of these is a new draft only Lager Series. It also appears that Breakside will continue to package its beers only in glass 12-ounce and 22-ounce bottles alongside its draft offerings. Therefore it does not appear that cans are on the horizon from Breakside.

“Our 2019 calendar is exciting,” said Ben Edmunds, brewmaster for Breakside Brewery in a statement. “The rotating IPA series returns, featuring four favorite hoppy beers that we have refined over the past few years. Our barrel program continues to grow – both in wood-aged strong ales and mixed culture sour beers. The first releases from that wing of our brewery include some exciting new beers like The Oligarch and Fruits That Begin With The Letter Yuzu.”

Here are a few of the highlights to look forward to this coming year as provided by the brewery.

Year-Round Series Changes: Not only has the popular What Rough Beast made its hazy way into the year-round lineup, but the brewery has added a new beer to the mix: True Gold. A “golden pilsner” this easy drinker, available in six packs, has a bite and crispness that hearkens back to a pilsner or lager, with a distinctive Breakside-style twist. The signature Breakside IPA, Wanderlust IPA, Pilsner and Stay West IPA remain as part of this series in 2019.

Seasonal Streamline: The brewery’s core seasonal lineup will focus on two main beers, starting out the year with Tall Guy IPA and following with Passionfruit Sour Ale in June. Salted Caramel Stout rounds out the year with a brief appearance during the holiday season. The Seasonal IPA series remains the same for the year.

The Oligarch: A study in barrel-aged experimentation, this new brew is far more than “just” an Imperial Stout. The Oligarch project encompasses 84 casks, 122 bbls of finished beer and no less than eight resulting variants. Aged in bourbon barrels (including some that previously contained maple syrup) the different beers resulting from this creative undertaking feature ingredients ranging from chocolate, vanilla and cinnamon all the way to mushrooms, almonds and raspberries.

New All-Draft Lager Series: A smaller volume project, but with big appeal, beers in this series are, as Edmunds says “universally loved by our brewers, and for good reason: they are refreshing, smooth, drinkable, clean, and complex.” More and more Breakside customers are trying and enjoying lagers, so the brewery is releasing a series of all-draft lagers to present these beers to a wider audience for the first time.

To get a better look at many of the 2019 beer releases from Breakside Brewery, including its more experimental, barrel-aged and sour beers, please find this out by clicking here.