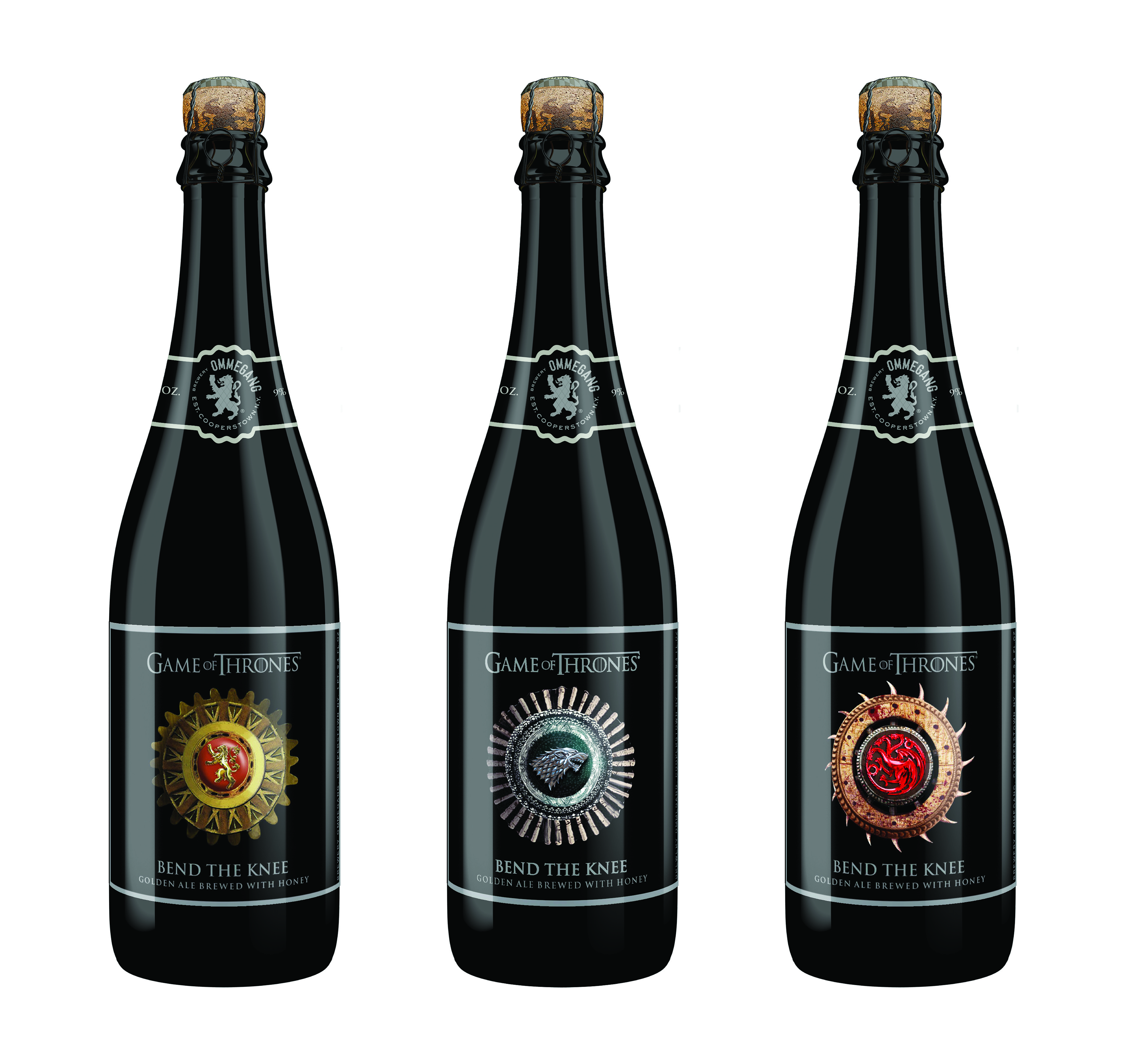 (COOPERSTOWN, NY) When fans last gripped their glasses at the end of Game of Thrones’ sixth season, the great houses of Westeros were on the brink of an epic conflict. Cersei had ascended to the Iron Throne as the first queen of Westeros, Jon Snow and Sansa Stark had just reclaimed the North, and Daenerys Targaryen had set sail for the Seven Kingdoms. To commemorate the coming mêlée in the Emmy® Award-winning show’s epic seventh season, Brewery Ommegang and HBO Global Licensing are excited to announce a new beer in their collaborative series: Bend the Knee Golden Ale.

Paying homage to the struggle for control of the Seven Kingdoms, Bend the Knee will be available on draft and in a series of three collectible 750ml bottles, all finished in matte black and adorned with one of the three Great House sigils: Stark, Targaryen, or Lannister. The beer clocks in at 9.0% ABV and bears a suggested retail price of $10.99 per bottle. And while the show’s return date has yet to be announced, fans can mark their calendars for the official nationwide release of the beer, which will be on shelves around Memorial Day.

“With this next Game of Thrones-inspired release, we wanted a beer and a pack that was fit for a king… or a queen,” said Brewery Ommegang President, Doug Campbell. “Drawing from a rich Belgian brewing tradition, Golden Strong Ales are deceptive due to their unique combination of extreme drinkability and relatively high alcohol content. Bend the Knee walks that line, while also incorporating the delicate flavors of honey into the mix. The subtle noble and floral hop contribution adds to its delicateness, and the beer finishes smooth and dry.”

“We love the idea of a golden ale to kick off the summer and to keep fans engaged as they wait for Game of Thrones to return,” said Josh Goodstadt, Vice President of Global Licensing and Retail, HBO. “With the story focusing in on these three major houses—Stark, Lannister and Targaryen—we’re excited to give fans the chance to align themselves with their favorite house as they sip this latest brew.”

Bend the Knee is brewed with pils malt and flaked oats and hopped with Saaz, Bravo, and Styrian Golding hops. It pours a golden hue with a large, frothy head. Both the aroma and flavor mix maltiness and citrus from the hops, while Ommegang’s signature house yeast produces prominent fruitiness. Wildflower honey added during fermentation provides light sweetness to the beer, which finishes dry and with firm hop bitterness.

Fit for any feast table, Bend the Knee’s clean and balanced flavor and effervescent carbonation make it a fine pairing for a variety of foods including seafood and shellfish, roasted or grilled chicken, grilled steaks, and aged Swiss-style cheeses.

About Brewery Ommegang
Brewery Ommegang opened in 1997 to brew imaginative craft beers across a variety of styles, with particular emphasis and respect for Belgian brewing traditions. Ommegang brews nine ales year-round, as well as an extensive and innovative range of seasonal and specialty ales. The beers have won a national following by connoisseurs of fine beer and are distributed in 46 states and internationally. Ommegang is located on a 136-acre farmstead in Cooperstown, New York and offers free daily tours and inexpensive tastings as well as a 100-seat café, a well-stocked brewery store, and an annual calendar of public events including a summer concert series and a legendary beer festival, Belgium Comes to Cooperstown. Ommegang is open every day of the year except for Thanksgiving, Christmas Day, and New Year’s Day. For more information, contact info@ommegang.com, call 1-800-544-1809, or visit www.ommegang.com. Ommegang is a member of the Duvel family of fine beers. Follow Ommegang on Twitter: @BreweryOmmegang, Facebook.com/Ommegang, and Instagram: @BreweryOmmegang

About HBO Global Licensing
HBO Global Licensing officially licenses the HBO® brand for the development and merchandising of innovative product lines inspired by the network’s award-winning programming. With products created around hit series like Game of Thrones® and True Blood® as well as classic series like The Sopranos®, Sex and the City®, and Entourage, items include fashion apparel, figures, jewelry, digital and CD soundtracks, prop and costume replicas, games, books, and beverages, as well as exclusive, premium collections in partnership with upscale, designer brands. Merchandise can be purchased in retail stores nationwide, at http://store.hbo.com, and at the groundbreaking HBO retail hub, the HBO Shop®, located at 42nd and 6th Avenue in New York City. HBO Global Licensing products are also sold internationally across Europe (www.hboshopeu.com), Asia and Australia.