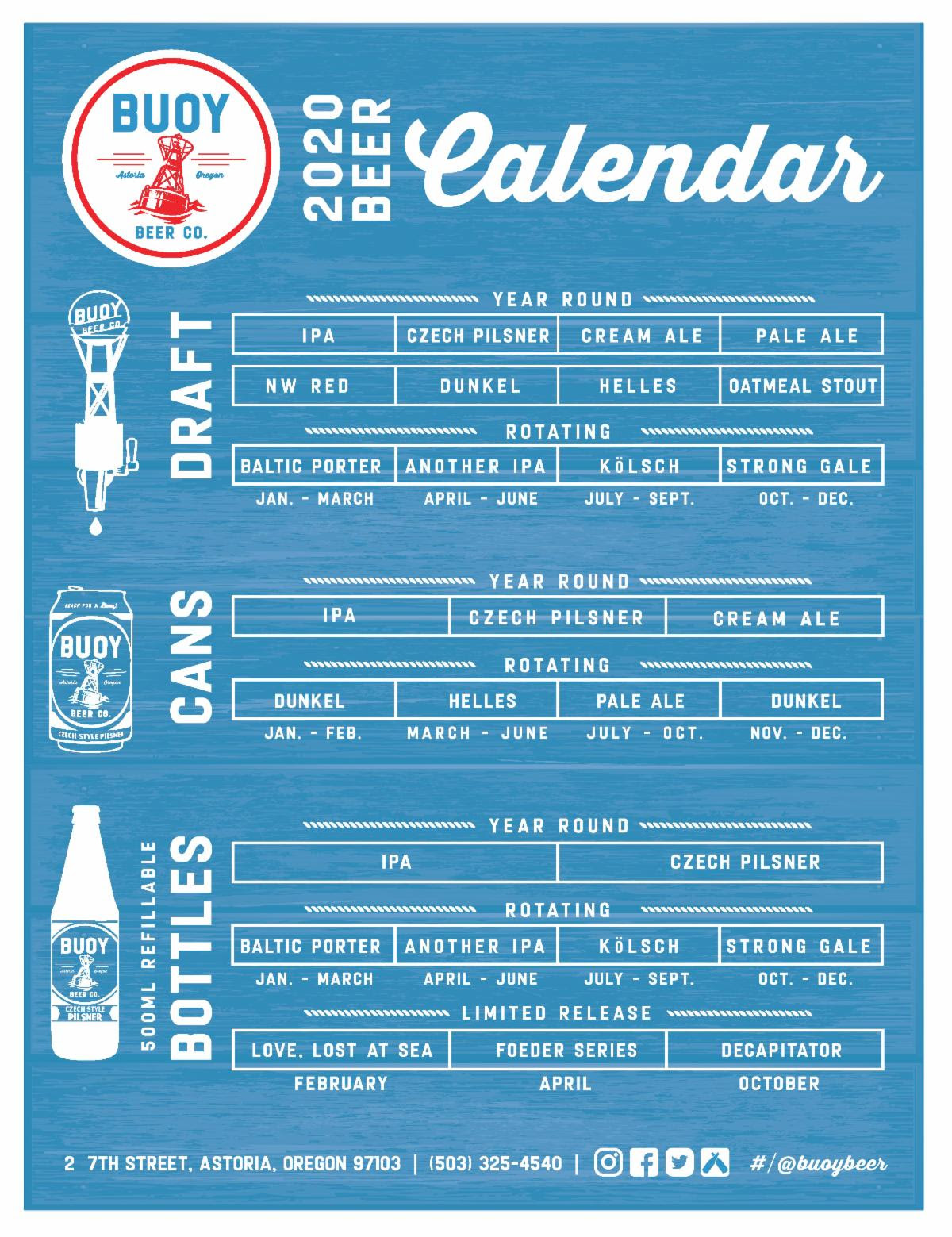 ASTORIA, OREGON – Buoy Beer Company announces their 2020 beer calendar depicting the seasonal and specialty beers to be released throughout the year. Baltic Porter will be followed by Another IPA in April-June, Kolsch in July-September, and Strong Gale October-December. These beers will be available in draft and in bottles. The refillable bottle seasonal line will continue in this trimonthly rotation. In 12oz 6pk cans, Dunkel Lager will be followed by Helles Lager in March-June, Pale Ale July-October, and Dunkel Lager November-December. Specialty bottles will include Love, Lost At Sea 2020 released in February, the next rendition of the Buoy Foeder series in April, and Decapitator Doppelbock in November.

“For the past 5 years, our brewers have been creating excellent one-off beers, mostly served at the brewery but some of them making their way out into our distribution area,” says Kevin Shaw, Brewmaster. “In creating a beer calendar this year, we hope to get our distribution consumer base familiar with our seasonal beers.”

Fashioned in the Slavic style of Baltic Porters, the brewers created a beer that crosses the boundaries between rich and crisp, smooth and brisk – lagering below freezing for thirty days and thirty nights evolved the resonant flavors of coffee, filberts, and bittersweet chocolate into a beer perfect to transition between winter and spring.

The Baltic Porter tradition has similarities to the legendary IPA story, when British brewers exported their famously crafted high-ABV and heavily hopped beers to weather the journey; in this case, the porter went by way of the Baltic Sea. On its journey, the style diversified in each new country and became a regularly brewed style from the Scandinavia to Slavic regions.

“What excites me about Baltic Porters is the variety within the style,” says Michael Duron, Lead Brewer. “The style changed as it moved across Europe, from top-fermented porters in Scandinavia that are rich and roasty, to Slavic countries that produce Baltic porters that are bottom-fermented and akin to bocks. The Buoy Baltic Porter follows the Slavic traitions by bottom fermenting with our house lager yeast.”