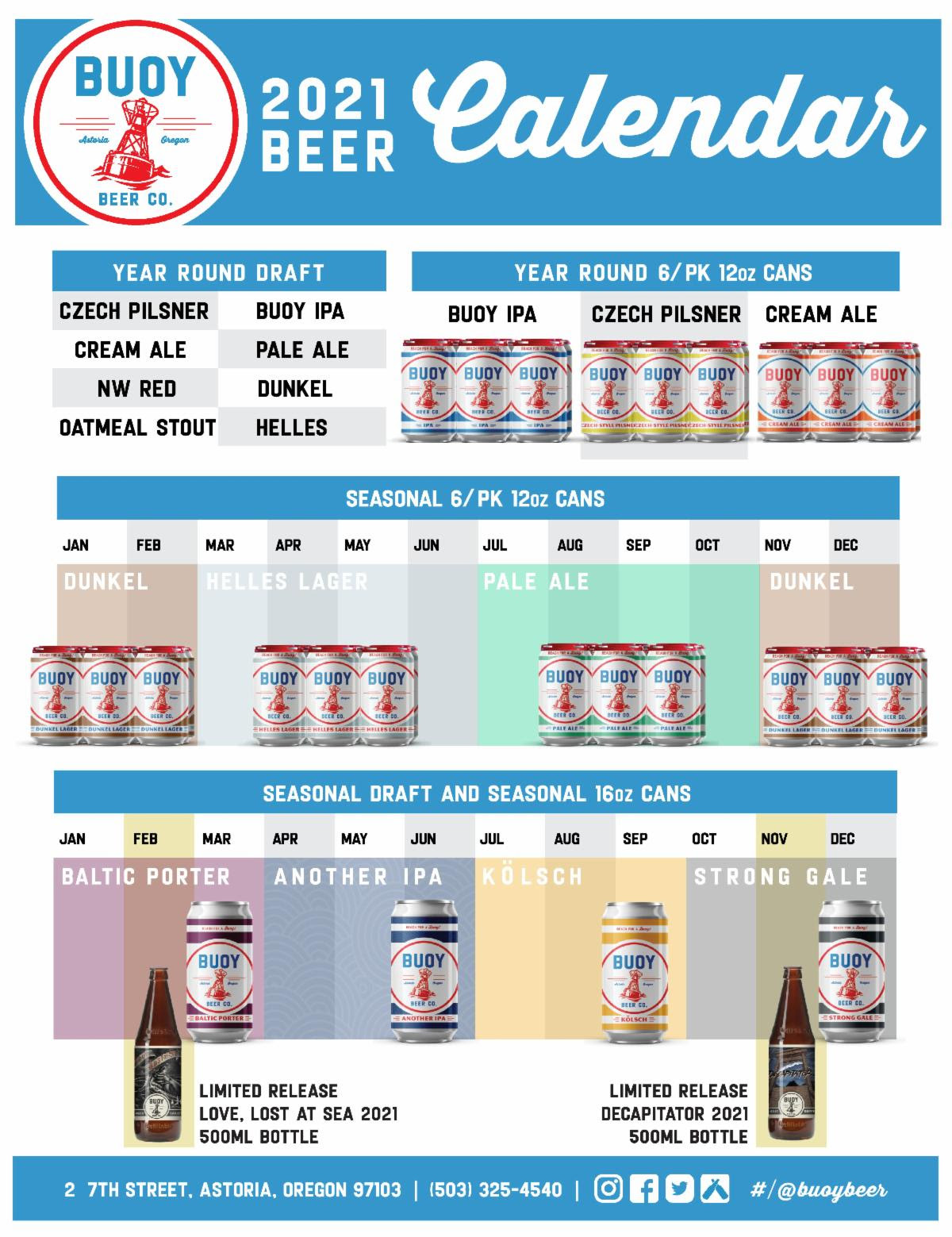 ASTORIA, OREGON – Buoy Beer Company has released their 2021 beer calendar of seasonal and specialty beers. Baltic Porter will be followed by Another IPA in the Spring, Kolsch in July-September, and Strong Gale October-December. These beers will be available in draft and in 16oz cans, switching from the bottles used in prior years. In 6-pack 12oz cans, Dunkel Lager is available now and will be followed by Helles Lager March-June, Pale Ale July-October, and Dunkel Lager November-December. Specialty packaged beers will include Love, Lost At Sea 2021 released in February, the second rendition of the Buoy Foeder series, and Decapitator Doppelbock in November.

“When we announced our beer calendar for 2020, the brewery was excited to share the new seasonal line with the Pacific Northwest,” says Jeremiah Smith, Sales Director. “However, 2020 had different plans and bars never had a chance to pour draft pints of Baltic Porter, Another IPA, Kolsch, and Strong Gale – so we’re keeping our fingers crossed for 2021.”

Baltic Porter has a lot of variety within the single style. Historically, kegs of Baltic Porter traveled between England and Russia as a trade good and variety grew as the style was adopted. This resulted in different adaptations along the trade route in the Baltic Sea, from top-fermented porters in Scandinavia to Slavic countries that produce bottom-fermented porters that are akin to bocks. Buoy Baltic Porter follows the Slavic traditions by bottom-fermenting with their house lager yeast.

Another IPA will brighten this Spring with a wallop of Strata, El Dorado, and Comet hops with a tropical, citrusy, and dank flavor profile. Buoy Kolsch weaves the strict Reinheitsgebot rules with touches of the Pacific Northwest, with spicy, floral aromas and a sturdy bitterness. Strong Gale will make its sixth rotation around the sun, hopped with a trio of hops that will be determined closer to brew day.

“With the brewery expansion coming online in late Spring 2021, we are looking forward to sharing more Buoy Beer with Oregon & Washington,” says Kevin Shaw, Director of Brewing Operations. “Continuing to expand the seasonal lines has been a goal for years now, we’re excited to put those plans into action.”

Love, Lost At Sea 2021 will return for the fourth rendition of Buoy’s barrel-aged barleywine in February. The second batch of the Buoy Foeder series will be released this calendar year based on the spontaneity of the Brett yeasts strains and part of the batch will be infused with stonefruit. Decapitator Doppelbock will be released in November.