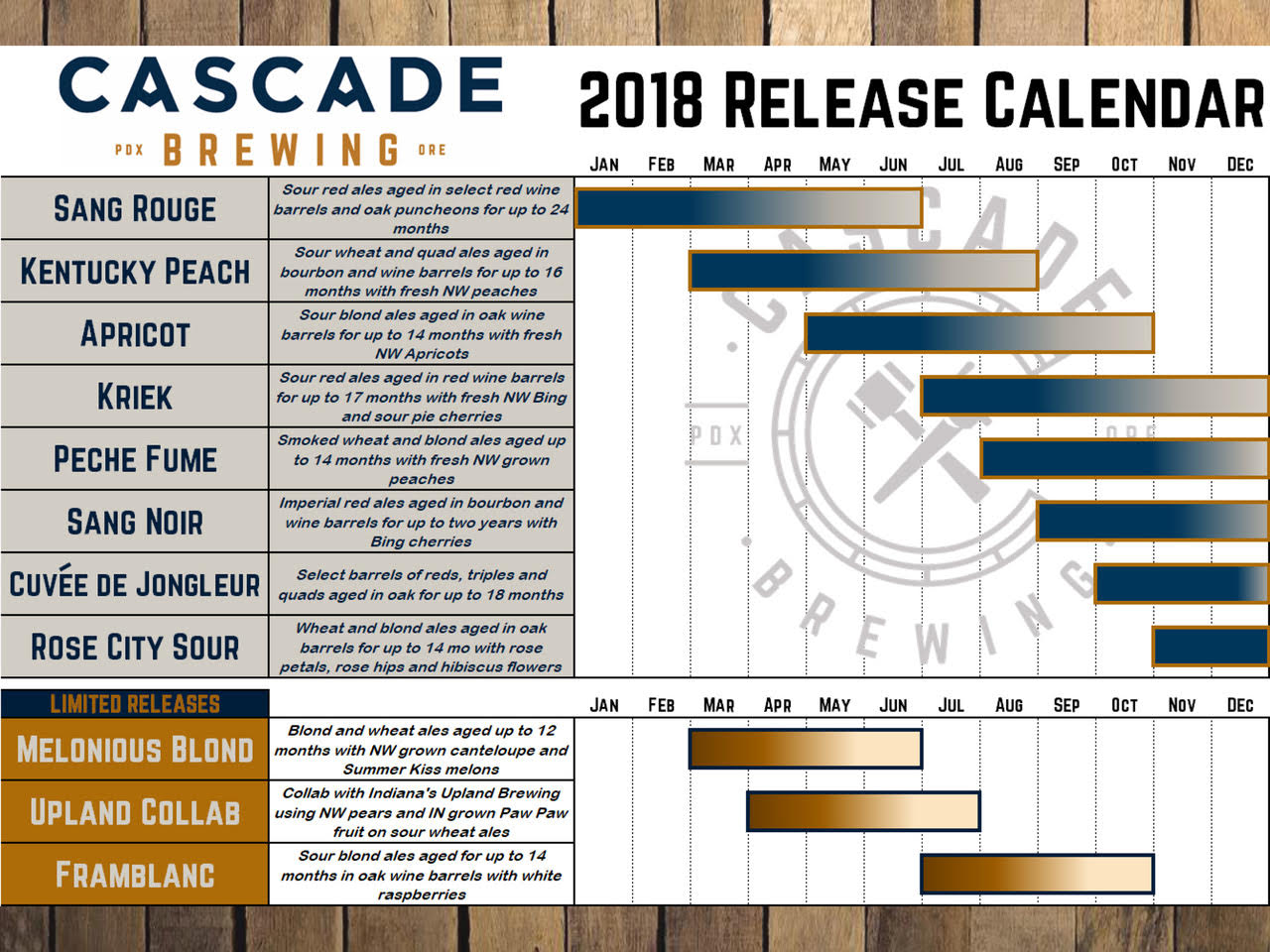 Cascade Brewing returns with eight core releases and three limited releases in 2018. From its 2018 Beer Release Calendar, Cascade Brewing will release Sang Rouge, Kentucky Peach, Apricot, Kriek, Peche Fume, Sang Noir, Cuvée Du Jongleur, and Rose City Sour as part of its core releases. When it comes to its three limited releases the brewer collaborates with Bruery Terreux on Framblanc and Upland Brewing on a yet to be named beer while releasing Melonious Blond on its own. The brewer states that its 2017 limited releases were the quickest sell out of any beer Cascade has brewed.

“In the coming year, we’re taking a slightly different approach to our annual release schedule,” stated Tim Larrance, vice president of sales and marketing. “We will be offering fewer releases, but making a greater quantity of cases and kegs available to our wholesalers worldwide, meaning more beer for everyone!”

Added lead blender Kevin Martin, “Narrowing our scope on fewer releases throughout the year will enable our production team to focus on the finer aspects of each blend, which we’re confident will result in some of the best beers ever to come out of our cellar.”

Cascade’s 2018 release calendar will kick off in January with the return of Sang Rouge, following a three-year absence. Sang Rouge is a blend of sour red ales aged in select red wine barrels and fresh oak puncheons for up to 24 months.

In March, look for Kentucky Peach, which debuted as a limited release in 2017, when it sold out in record time. “When we released the 2016 blend as a side project, we had no idea it would be received with such enthusiasm,” said Martin. “We brought in as many peaches as we could process in 2017 to help meet some of the demand out there.” The brewery has more than doubled the batch size for 2018.

Cascade Brewing’s three top selling beers of all time – Apricot, Kriek, and Sang Noir – will each be available for their fifth consecutive year, releasing respectively in mid April, mid June and mid August. Each Cascade project is named for the year the fruit was picked; therefore, each project is different based on each particular fruit’s growing season.

Peche Fume, the brewery’s second peach offering, will launch in mid July just in time for late summer. This product was made for the first time in 2017 but was only available on draft at Cascade’s two pubs in Portland. This year, the company will have both bottles and draft available through its wholesalers.

If Cascade had a “White Whale” it would be Cuvee du Jongleur. This beer’s original 2009 release featured a blend of select reds, triples and quads; it was bottled and sold exclusively at the brewery’s two pubs, but somehow acclaim for this beer has made it across the globe. In late 2018, Cascade will release a new version through its network of wholesalers worldwide. According to Martin, “We’re finally resurrecting this long-lost project after being out of the rotation for nearly a decade. We had to dust off some of brewmaster Ron Gansberg’s old handwritten blending notes to re-learn how to make it true to the original!”

To cap off 2018, Cascade will be releasing the second edition of its popular Rose City Sour. First introduced in the summer of 2017, this beer has become one of Cascade top selling products and could soon become its new flagship.

Cascade’s first melon sour will hit the shelves in late winter. Melonious Blond is a blend of sour wheat and blondes aged up to 14 months with fresh Oregon Cantaloupe and Summer Kiss melons. This will be a limited release of both bottles and draft and expected to sell out quickly. “Melons are a notoriously difficult ingredient to ferment,” noted Martin. “But since they are one of Oregon’s most delicious summer fruits, we wanted to take on the challenge and we couldn’t be happier with the end result.”

Cascade’s 2018 collaboration project is a yet unnamed project with the acclaimed Upland Brewing from Indiana. As with Cascade’s 2017 collaboration, One Way or Another with Bruery Terreux, each brewery will use a fruit locally found in each of their respective markets. Cascade will provide locally grown fresh pears from Oregon; while Upland will supply fresh Paw Paw fruit (a cross between a mango and a banana). This project will be available in both bottles and draft. According to Martin, “We’ve admired the sour program at Upland for a number of years, and are thrilled to finally see this project come to fruition.”

Framblanc will once again be offered as a limited release in 2018. Stated Larrance, “We hope to someday be able to have this as a core release, but white raspberries are very hard to come by and we can only make enough beer based on the amount of fruit we get each year. This winner of the 2017 Oregon Beer Awards continues to be one of our fastest selling brands we release.”