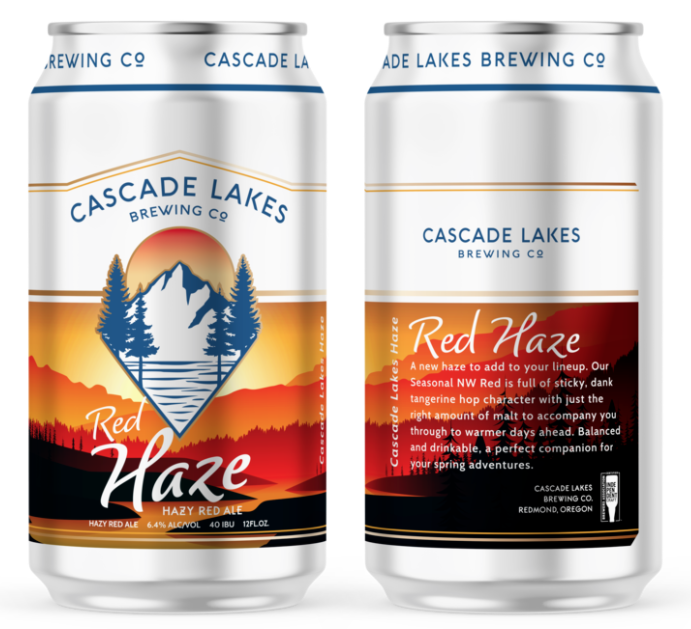 (BEND, Ore.) — As PNW days grow longer and warmer, and the seasons shift from winter to spring and (someday) summer, we all need a versatile beer that will transition with us. A beer like the new Red Haze seasonal hazy red ale from Cascade Lakes Brewing Co.

A true “shoulder season” beer if ever there was one, Red Haze combines the malty characteristics and rich color of a red ale, with the hoppiness and opacity of a hazy beer, to create a balanced hazy red ale that is the perfect accompaniment to the warmer spring days ahead.

“These days it seems almost everyone has a Hazy IPA in their lineup, and more and more brewers are producing Red Ale, but very few have experimented with taking the best of both worlds and bringing them together in the way that Red Haze does,” said Cascade Lakes’ brewmaster Ryan Schmiege. “The result is a sticky, dank tangerine hop character with just the right amount of malt to wean you off of the darker winter beers and transition your palate into spring and summer brews.”

Now available on tap at Cascade Lakes’ Central Oregon pub locations and in six-pack 12 oz. cans at grocery stores throughout Oregon and Washington (with distribution to follow shortly in Montana and Idaho), Red Haze is brewed with Cascade and the new Altus hops and weighs in at a modest 6.4% ABV and 40 IBU.

About Cascade Lakes Brewing Co.
Born in 1994 in beautiful Central Oregon, Cascade Lakes Brewing Co. is a bold, genuine, innovative, and community-minded brewing and eatery company. Under the direction of General Manager Andy Rhine and Brewmaster Ryan Schmiege, Cascade Lakes produces more than 7,000 barrels of beer annually, including six year-round brews and a rotating selection of seasonal offerings. Cascade Lakes’ beers can be found in five states along the west coast, on select bar and restaurant taps, and at the brewery’s brick-and-mortar pubs including the Bend flagship location on the road to Mt. Bachelor, and the original 7th Street Redmond location. A third Cascade Lakes pub is set to debut in Bend in late 2022. For more information visit www.cascadelakes.com.