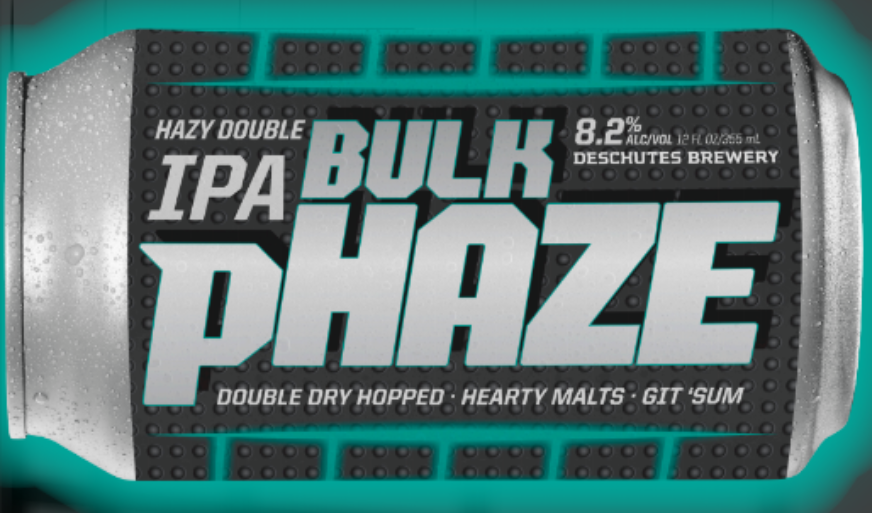 Well there’s an honorary day for everything imaginable. Today we learned that there’s a National Protein Day and this day takes place on Thursday, February 27th. And this day has no significance to Robert Atkins, the physician the devised the protein friendly Atkins Diet.

Jumping in the ring on this high protein idea is Deschutes Brewery as it is set to release Bulk pHaze IPA, a mega-beer packed with calories and carbohydrates with a higher ABV, protein malt and seven different hop varietals. The release of this beer is a 180 for the Bend based brewer and a bit tongue in cheek. Deschutes recently launched WOWZA! and last year, Da Shootz!, two low-cal, low-carb beers along with its gluten reduced beer, Lil’ Squeezy. Plus, the can’s label looks eerily similar to that of a protein shake. Well played Deschutes!

“It started as a joke during after shift beers,” said Lead Brewer at Deschutes, Tanner Hulse, in a statement.. “I catch a lot of flak for being the “resident bro” of the brewing department, so I decided to lean in and design a huge, high-calorie beer to bulk up our brewers. We had so much fun experimenting with this and ended up creating a really damn good beer.”

Bulk pHaze IPA Description:
Brewers left nothing off the table trialing this behemoth of a beer. Using the brewery’s state-of-the-art pilot brew system, this brewer’s passion project, a double dry hopped Hazy Imperial IPA, was born. Bulk pHaze is sweet and juicy with a robust body. Clocking in at 8.2% ABV and 70 IBUs, Bulk pHaze boasts 5 pounds of hops and over 3 pounds of milk sugar per barrel, adding a big boost to the body and to the sweetness of the beer. “It’s like a favorite protein shake, a bodybuilder’s dream!” Hulse said.

Bulk pHaze debuts on National Protein Day, Thursday, February 27th at Deschutes Brewery pubs and tasting room in Bend and Portland, Oregon in 12-ounce 6 pack cans and on draft. This beer is an extremely limited release so don’t expect to see it around for long.