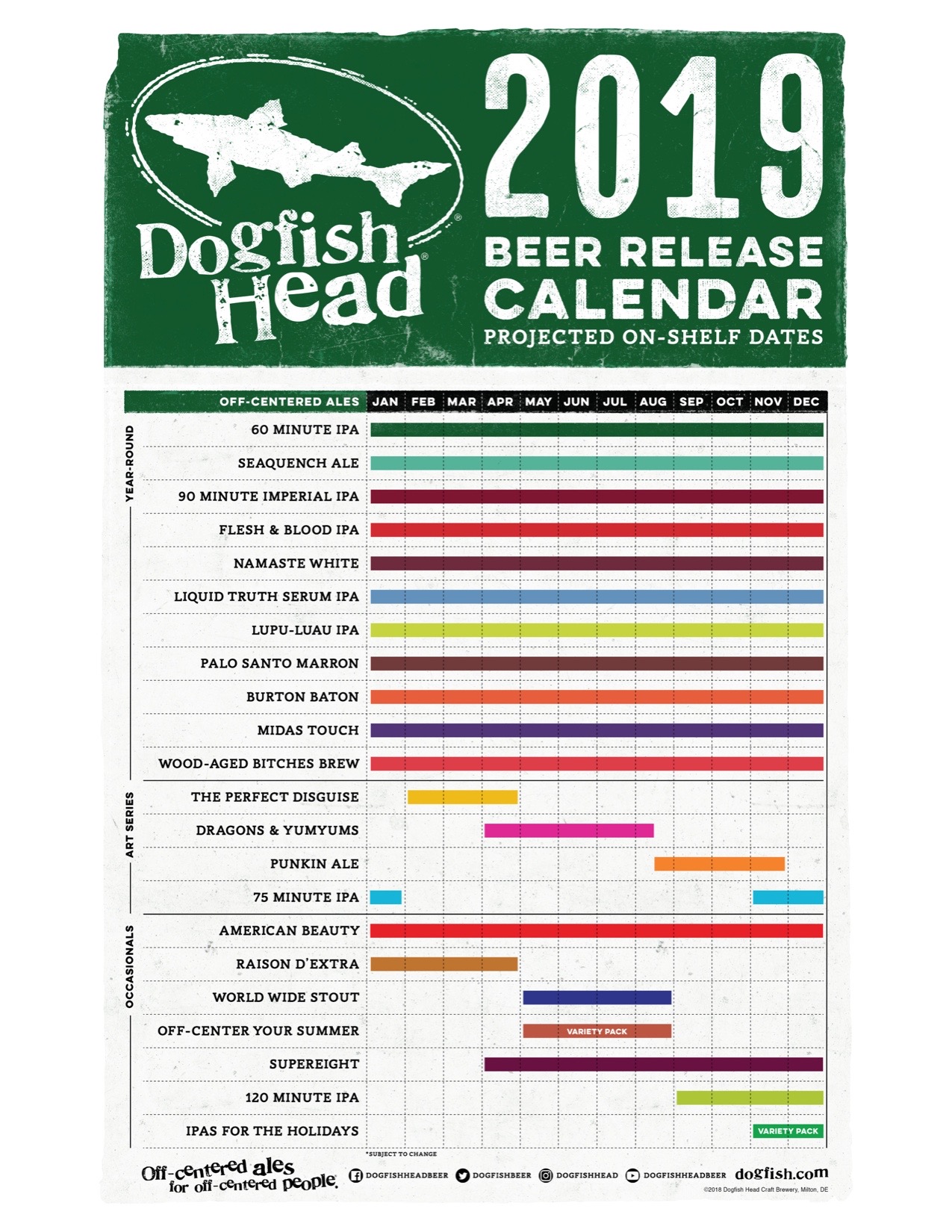 Delaware’s Dogfish Head Craft Brewery has announced its 2019 Beer Release Calendar. Many of the brewery’s favorites such as 60 Minute IPA, 90 Minute IPA, and SeaQuench Ale all return as year-round offerings. In addition to these there will be various seasonal offerings throughout the year.

One beer making its return in 2019 is its beer that honors the Grateful Dead, American Beauty. One new offering is SuperEIGHT while Liquid Truth Serum IPA will be in 12 oz. cans. Also returning is the popular World Wide Stout and The Perfect Disguise!

But with these new beers and once coming out of retirement, a few of Dogfish Head’s beers will be moving to the wayside but may return one day. These beers include Indian Brown, Festina Pêche, Pennsylvania Tuxedo and Romantic Chemistry IPA.

Here’s a breakdown on many of the beers that will be released in 2019 from Dogfish Head.

YEAR-ROUND BEERS:
60 Minute IPA – Our continually hopped super-fantastic IPA is not only available in 12 oz. bottles and cans, but you’ll also find it in 19.2 oz. cans!
SeaQuench Ale – Not only is SeaQuench Ale the fastest growing beer in Dogfish Head history, it’s the fastest growing sour in the country! Available in 12 oz. AND 19.2 oz. cans!
90 Minute Imperial IPA – A beautifully balanced imperial IPA, you can find this one in 16 oz. cans as well as 12 oz. bottles!
Flesh & Blood IPA – Brewed with a bevy of real citrus, Flesh & Blood balances the resinous hoppy characteristics of an American IPA with the explosive zesty fruitiness and subtle drying tartness of citrus.
Namaste White – A Belgian-style white ale bursting with karma in both 12 oz. bottles and cans!
Liquid Truth Serum IPA – A blissfully inefficient IPA full of citrusy and tropical notes, that’s truthfully hoppy without being deceptively bitter … and coming to 12 oz. cans in addition to the already available 16 oz. cans!

OCCASIONALS:
American Beauty – January – December
Ask and you shall receive! An instant fan-favorite when we released it back in 2013, we’ve heard you loud and clear that you wanted an encore from this psychedelic pale ale. Brewed in collaboration with the Grateful Dead, American Beauty is made with granola and succulent wildflower honey, and is returning in 6-pack 12 oz. bottles this time around!
Raison D’Extra – January – April
Our Raison D’Etre, with a little extra. This immodest brew, made with an obscene amount of malt, brown sugar and raisins, takes Belgian-style browns to new heights.
World Wide Stout – May – August
Brewed with a ridiculous amount of barley, World Wide Stout is dark, roasty and complex. This ageable ale clocks in at 15-20% ABV and has a depth more in line with a fine port
Off-Center Your Summer Variety Pack – May – August
An innovative 12-pack that carries and cools your beer … just add ice to the waterproof box and you’re all set! Featuring Namaste, SeaQuench Ale, SuperEIGHT and… well, you’ll just have to wait and see!
SuperEIGHT – April – December
Sessionable gose brewed with eight super ingredients: prickly pear, mango, boysenberry, blackberry, raspberry, elderberry, kiwi juices, toasted quinoa and an ample addition of red Hawaiian sea salt! Okay, so technically that’s nine, but it ‘gose’ without say that there’s going to be salt.
120 Minute IPA – August – December
The Holy Grail for hopheads returns in 2019!
IPAs for the Holidays – November – December
Our variety pack featuring some of our most beloved IPAs – stay tuned for exact contents!