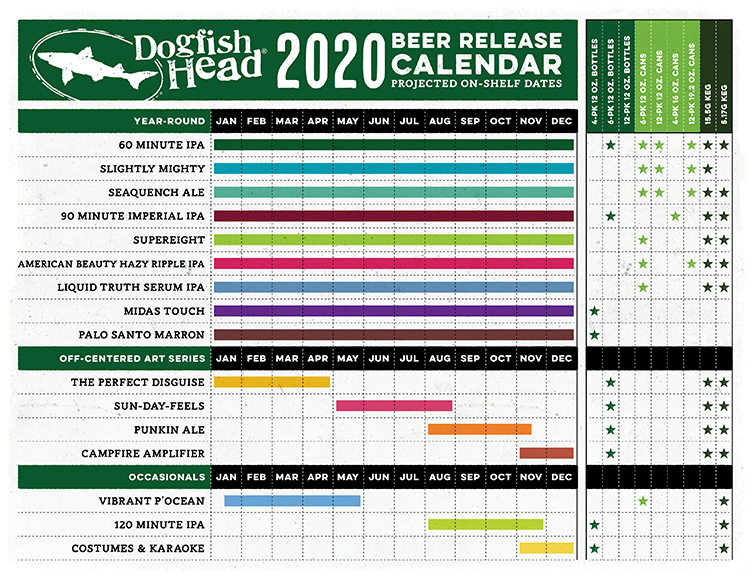 Dogfish Head Craft Brewery is excited to announce its 2020 Beer Release Calendar that will see over 160 offerings being released within the new 2020 calendar year.

In May 2019, Dogfish Head was acquired by The Boston Beer Co., makers of Samuel Adams beers. To stay in the minds of craft beer drinkers, Dogfish Head will release more than 160 products in the coming year, many will only be available at its pubs. These 160 releases will include national releases such as its 60 Minute, 90 Minute and 120 Minute IPAs to regional only available beers to its lineup of distilled spirits.

“The announcement of our yearly lineup of releases is always one of my favorite moments of the year, especially since it includes so many creative and still-to-be invented offerings,” said Sam Calagione, founder of Dogfish Head, in a prepared statement. “While our calendar of nationally-distributed brands is ready to roll, many of our regional and local releases remain in ideation. This allows our talented brewers and distillers, and me, the flexibility to quickly consider whims, hunches, artistic trends and the following of our collective muse to inform our creative journey.”

Folks local to its brewery in Delaware can expect a variety of limited-edition, 750ml bottles from the brewery’s R&DFH Series for purchase at its production facility in Milton, Delaware, as well as an abundance of draft-only beers for enjoyment at the brewery’s Milton Tasting Room & Kitchen and Rehoboth Beach Brewpub. Additionally, throughout the Mid-Atlantic, the brewery will distribute a selection of small-batch, 375mL bottles from its ‘Wooden … it be nice!’ wild beer program.

Here’s a brief rundown on some of the more extensive offerings that Dogfish Head will bring forth in the year 2020.

To celebrate the creation and release of American Beauty Hazy Ripple IPA, David Lemieux, archivist and legacy manager for the Grateful Dead, will host a beer dinner at Dogfish Head Brewings & Eats in Rehoboth on Friday, February 28. For details and information regarding ticket sales, email info@dogfish.com.

Campfire Amplifier will be the first beer released from the brewery’s 2020-2021 Off-Centered Art Series next fall. Collaborating artist TBD.

To locate any of these Dogfish Head beer offerings in 2020, use its Fish Finder to better your search.