Hood River, OR – October, 2017 – Double Mountain Brewery & Taproom is proud to introduce the newest addition to their fresh hop family: Killer Lion Fresh Hop IPA. This well balanced fresh hop ale is currently available on draft and in bottles at the downtown Hood River Taproom and SE Portland Taproom in the Woodstock neighborhood. Killer Lion can also be found throughout the Northwest, and British Columbia.

“Of course we had to do a killer fresh hop version of the Hop Lion, the beer gods demanded it. When the lion roars, you gotta listen.”– Matt Swihart, Brewmaster 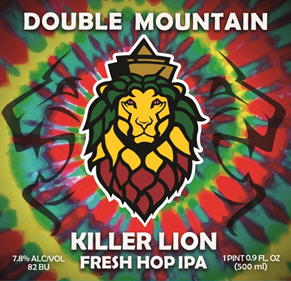 About Double Mountain Brewery and Taproom: Double Mountain Brewery and Taproom was established in 2007 in the heart of downtown Hood River, OR. Founder Matt Swihart opened the brewery with a clear mission: make great beer for craft beer fans. Their unique location lends to not only using pure and clean glacial water for their beers, but they also take advantage of regionally grown hops. With their reusable bottle program, customers love the softer environmental footprint and know they are part of a solution to sustainability. They can be found on tap and in bottles throughout the Pacific Northwest and British Columbia. Learn more at www.doublemountainbrewery.com