Hood River based Double Mountain Brewery & Taproom has recently released a special edition of its every popular Devil’s Kriek. This new limited edition version is known as Devil’s Cuveee Kriek. This oak barrel aged Devil’s Kriek had been pouring at the taproom in Hood River and has now made its way to bottleshops and select grocery stores within the brewery’s distribution footprint.

Devil’s Cuveee Kriek is a Flanders Red Sour Ale that is brewed with cherries and then aged in new French Oak barrels. “I think the added complexity of the tannins and sugars from the wine barrels are a perfect marriage with our aged kriek, the additional year in the wood takes the beer to whole new level, “ states brewery owner Matt Swihart in a press release. 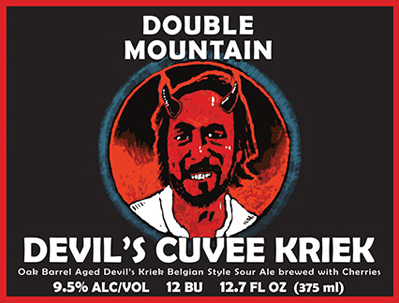 Double Mountain Beer Description:
Carefully selected Devil’s Kriek from 2014 aged on Hood River Valley Bing and Vann cherries was given time in new French Oak barrels and blended with a small portion of next year’s Kriek. Its’ time in the oak gave it more depth and wisdom, and ripened the fruit imparting a sherry and dry red wine character. The blend brings some youth and vivacity of the fruit to the table. With this beer we pay homage to the traditions set before us, and welcome the future ahead.