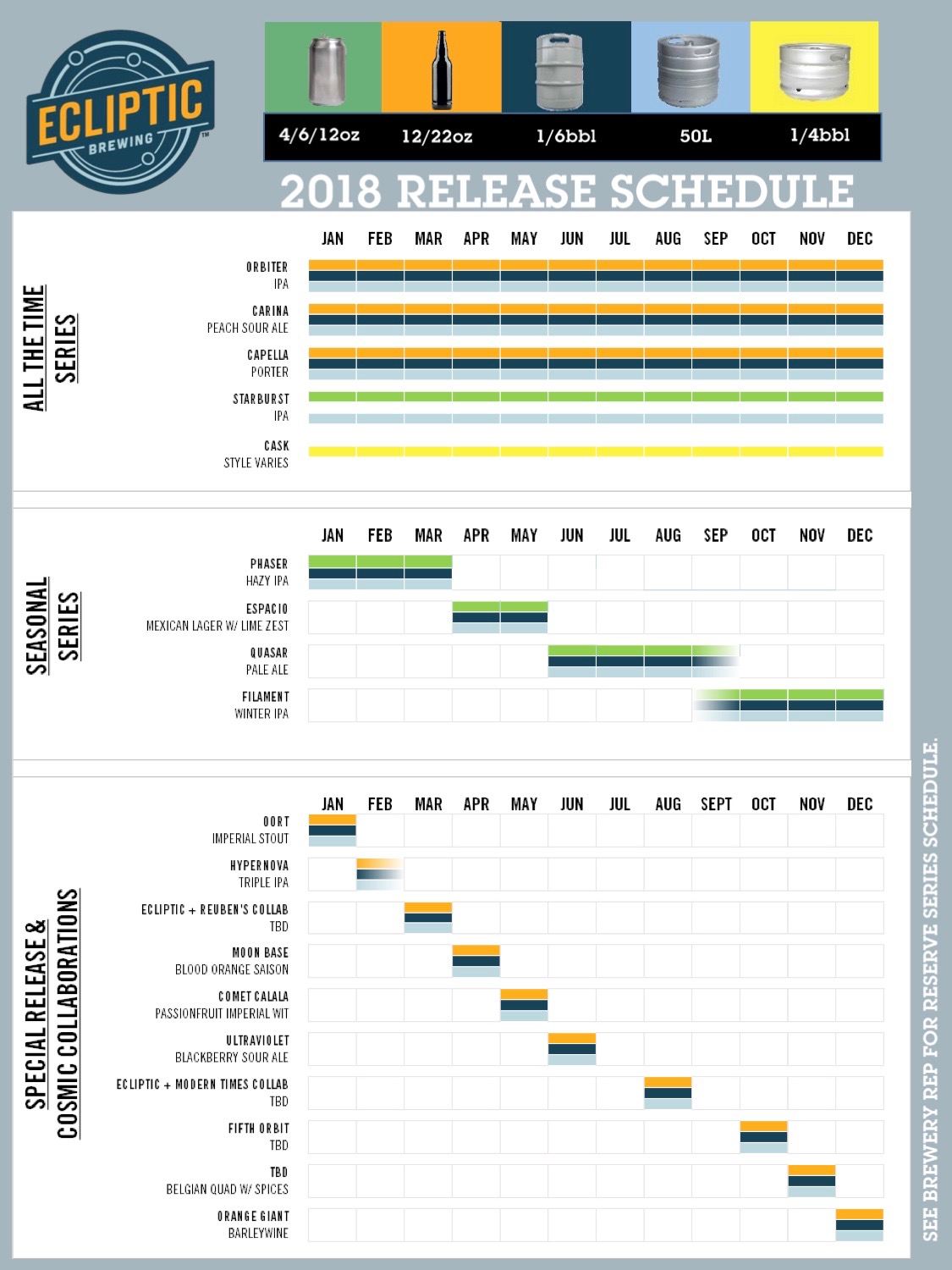 Portland, Oregon. Earth. (January 12, 2018)–  The past year was a busy one for Ecliptic Brewing and 2018 is looking to shape up no differently. Their 2018 beer calendar reveals the return of all year-round beers and some exciting changes to the seasonal and special release selections.

Ecliptic is starting the year with two new seasonal beers back to back, Phaser Hazy IPA and Espacio Mexican Style Lager with Lime Zest.  In response to the emphatic success of Quasar Pale Ale and Filament Winter IPA, fans can expect to see these return for the second half of 2018.

Getting even more creative in the brewhouse, the Special Release and Cosmic Collaboration Series will bring to the table some new styles and flavors.  Beer with fruit and spices, a special Fifth Orbit beer, and out of this world collaborations with Reuben’s Brews and Modern Times are a few of the things to look forward to.  Also, expect to see beers like UltraViolet Blackberry Sour Ale and Oort Imperial Stout reappear for 2018.

“We wanted to bring back the favorites but also introduce some new beers to our lineup,” said Owner and Brewmaster, John Harris.  “The philosophy at Ecliptic has always been to continually push the limits of creativity and in 2018 we definitely plan to do that.”

In addition to the below mentioned beers, Ecliptic will continue to release beers from their barrel-aging program as part of the Reserve Series.

About Ecliptic Brewing
Ecliptic Brewing is a venture from John Harris, an Oregon beer icon whose background is steeped in the state’s rich craft brewing history. The name Ecliptic unites Harris’ two passions: brewing and astronomy, and as such, the brewery celebrates the Earth’s yearly journey around the sun through both its beer and restaurant menus. Executive chef Michael Molitor rotates his seasonally inspired menu every six weeks in accordance with the old-world calendar. Harris’ signature beers include Starburst IPA, Orbiter IPA, Carina Peach Sour Ale, and Capella Porter. For more information, visit:http://www.eclipticbrewing.com/www.eclipticbrewing.com.