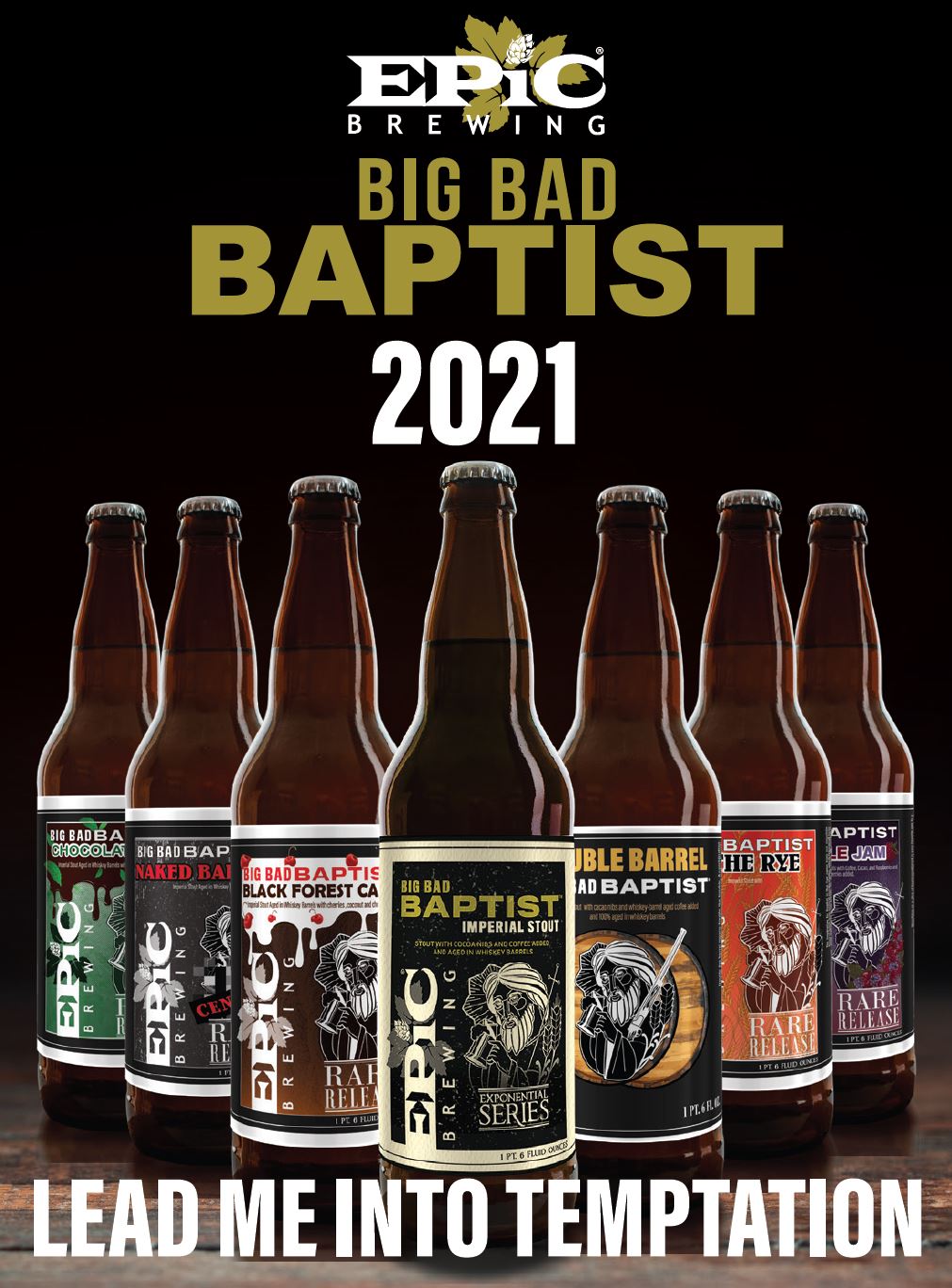 Epic Brewing announces the upcoming release of its Big Bad Baptist Imperial Stout and its six variants for 2021. Each fall, Epic Brewing releases its annual batch of its coveted Imperial Stout and this is no exception. The 2021 lineup includes Big Bad Baptist, Black Forest Cake, Naked Baptist, Double Barrel, Double Jam, In The Rye, and Chocolate Mint.

Here’s a list of the 2021 Big Bad Baptist lineup as provided by Epic Brewing.

Big Bad Baptist: For the third year in a row our classic, award winning, big and bold, original Big Bad Baptist will be available in 12oz, 4 pack cans in most markets and 22oz bottles in select locations. We spent the off-season continuing to improve our most recognized beer and we know you’ll think the 2021 release is the best yet. Even better, Big Bad Baptist is now year-round so you can enjoy your favorite barrel-aged stout during all four seasons.

Black Forest Cake: Have you ever had your cake and drank it, too? Chocolate, ripe cherries, and fresh coconut are layered into this decadent beer. The Sammelsurium of ingredients coalesce into the liquid form of a classic German treat. Skip dessert and reach for a bottle of Black Forest Chocolate Cake.

Naked Baptist: BIG BAD DISCLAIMER: what you are about to drink is the naked depiction of Big Bad Baptist in the way God – I mean our brewers – intended it. Be ready to indulge in au naturel, Burbon barrel-aged deliciousness, unadulterated by coffee or cacao. Jokes aside, our brewers have been begging to bottle this for years. Cheers to one our favorite liquids ever!

Double Jam: Raspberry, blackberry, and coffee come together – like breakfast on a Sunday morning – in what we like to call the most important beer of the day. Enjoy at the crack of dawn or as an endcap to the perfect evening, we don’t judge.

In The Rye: “Life is a game, boy. Life is a game that one plays according to the rules.” – J.D. Salinger. Epic strayed from the bourbon beaten path on this brew by aging it in 100% rye barrels, which add unique peppery notes and deep earthy tones to Big Bad Baptist. Comin thro’ the rye.

Chocolate Mint: Enjoy-Mint…. Refresh-Mint… Chocolate Mint! Big Bad Baptist Chocolate Mint is made with fresh mint and a copious addition of cacao nibs. Notes of mint live in harmony with silky chocolate and coffee flavor. “Get the sensation!’ of Refresh-Mint with every sip.

The 2021 Big Bad Baptist and its variants will be released on September 30 at Epic Brewing’s Denver Taproom. The brewery’s Salt Lake City tap-less taproom will release the variants on a weekly basis starting in October. All six variants will ship to the brewery’s entire distribution channel by the end of November.