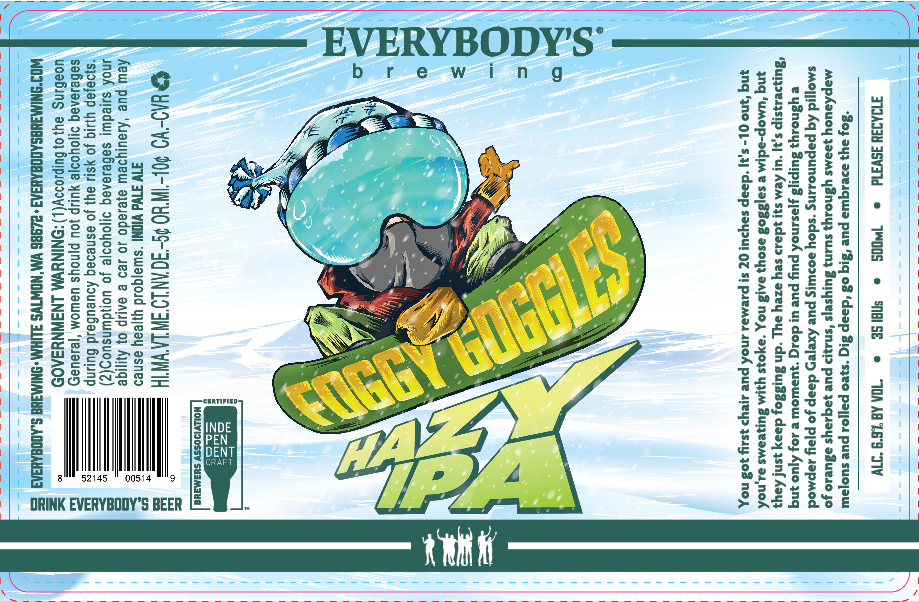 (Press Release) – Everybody’s Brewing announced the release of their new seasonal 22 oz bottle, Foggy Goggles Hazy IPA, available in stores Jan. 29th. Coming in at 6.9% ABV, and 35 IBUs, the hops include a blend of Galaxy, Simcoe, Azacca, and Ella. The brewery plans to keep this beer available in bottles and draft until April 1st. This bottle replaces Imaginary Friends in their 22 oz bottle rotation, which changes five times annually.

The brewery describes the beer as having “distinct flavors of orange sherbet and peaches, with a citrus, juicy aroma.” Rolled oats and a heavy dose of wheat are used to help give it a bright, orange haze. They use the A38 yeast strain from Imperial, which releases big, fruity esters. The bright, fruity flavors found in this IPA are a result of these esters complimenting the hop profile. Finally, lactose sugar is used to add the creamy mouthfeel and subtle sweetness.

Head Brewer Adam McClure is specific about what he wants to see when they brew this style. “Hazy beers walk a lot of fine lines. We want the color to be a glowing haze, and not look murky. We’re going for fruity and juicy, but not overly sweet, so you have to be careful with the lactose and treat your hops and yeast just right. I think we hit those lines spot on with this beer.”  McClure has a proven track record of making the style. The breweries recent Juicy AF Hazy IPA rates above 4 stars on the popular beer app Untapped, and Foggy Goggles currently rates even higher. “That’s not something we pay much attention to around here, but it’s nice to hear,” said McClure.

Foggy Goggles was first brewed for draft release back in November, for the opening of Mount Hood Meadows ski season. The name and branding were specifically chosen for Meadows, who is a long time supporter of the brand. “We’ve worked with Meadows for years,” said owner Doug Ellenberger. “They are great about supporting the gorge breweries, and we were happy to brand a beer for the mountain. The gorge is an outdoor adventure mecca, so it all makes sense.” This beer is a permanent fixture on tap at Meadows, and is also available on draft throughout OR, WA, and Northern ID. The bottles will also be available throughout the Northwest.