Monday March 9, 2020 – Everybody’s Brewing will release their newest 16oz can: Velvet Tiger Double IPA, available in stores March 11th. With a hop profile of Simcoe, Chinook and Cascade, it offers drinkers some smooth citrus and pine flavors with a robust aroma and clean finish. Velvet Tiger is a Northwest-style Double IPA with a glowing copper color and 8.7% ABV.

As consumers increasingly seek the newest and wildest hazy creations, owner/brewmaster Doug Ellenberger said the goal for this beer was to remind people why they first fell in love with the IPA style. “While there’s nothing wrong with a sweeter, juicy IPA, there are still a lot of people who appreciate a big piney IPA with a balanced bitterness. Velvet Tiger is a nod to those drinkers who have been a little forgotten about.”

Although Everybody’s makes plenty of new and experimental styles, they pride themselves on the details of the brewing process that make consistent, flawless beer. Head Brewer Adam McClure said that Velvet Tiger combined both passions. “We wanted to extract as much aroma and flavor from hop varieties that don’t get much notoriety these days, so we used some techniques we’ve developed making hazy, juicy-flavored beers and applied them to these classic hops.” He also noted that some of the hops used have more depth than their names suggest. “The Chinooks we got this year are incredible. We hand selected them from Roy Farms (Moxee, WA). They specialize in Chinooks and this beer is proof of the quality they are growing.”

The brand name and package design are a nod to the fuzzy velvet posters that usually feature tigers and other animals. Often found displayed on dorm room walls, the posters glow especially bright under a black light. The description on the can paints a picture of the fictious “Velvet Tiger Lounge”, where “classic is king and old school never dies.” Ellenberger said “We’ve had a velvet tiger poster in the employee lounge here for years. It always gets a lot of compliments, so we knew it would make a fun beer can. We thought it was appropriate since it’s a higher ABV beer at a price a price that even a 21-year-old college student can afford.”

The brewery has a rotating 16oz can program that puts out 12 different styles per year. Velvet Tiger will be available until the end of April. They release two different price “tiers” of 16oz cans at a time. Velvet Tiger falls into their lower priced tier and has a suggested retail of $11.99 per four pack, or $3.00 per can. The next 16oz can will be a hazy IPA brewed in collaboration with Stoup Brewing (Seattle). It will fall into the higher priced tier ($15.99 a four pack) and will be available April 15th. 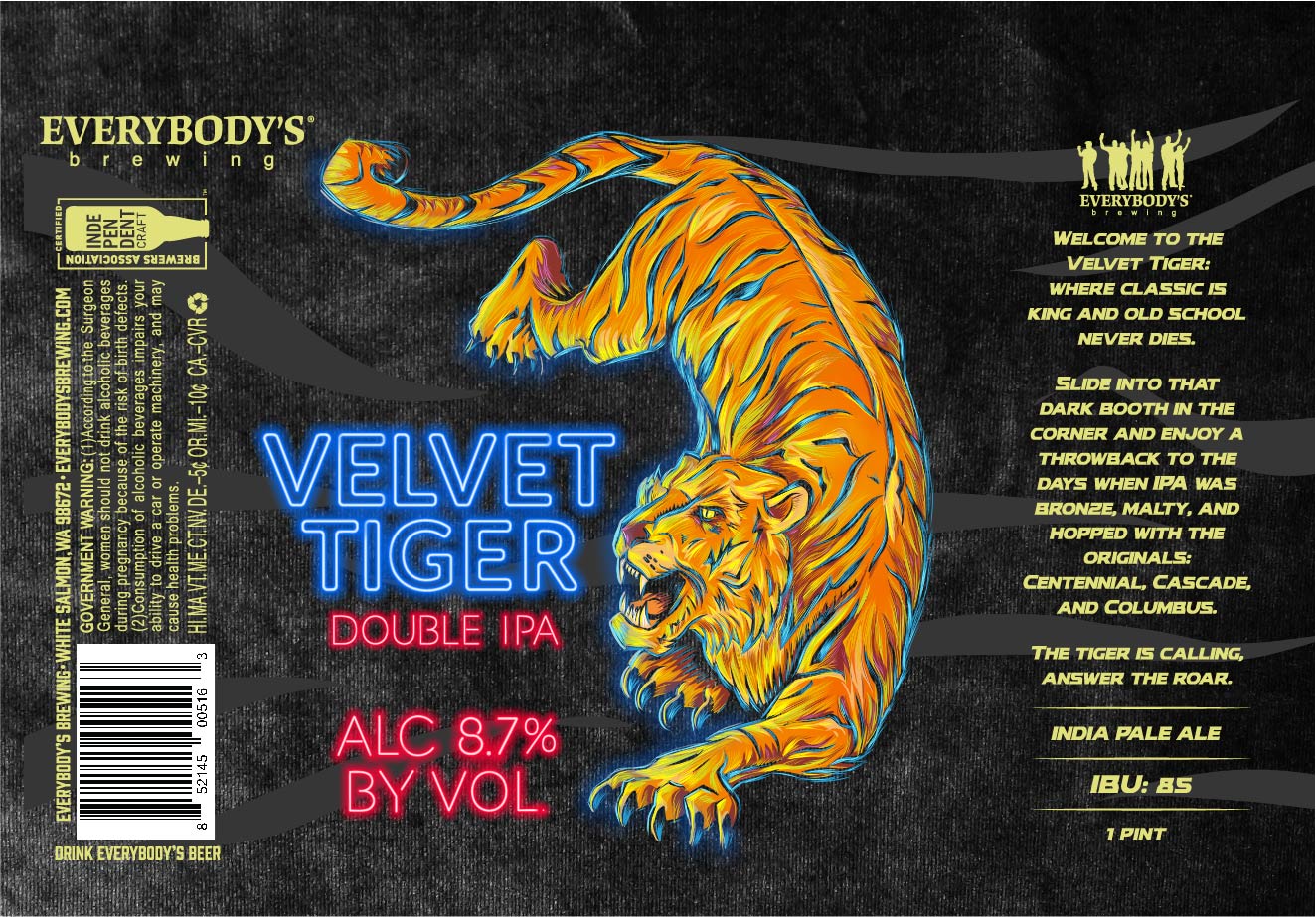 Everybody’s brewed 7200 barrels in 2019, making them the largest brewery in Southwest Washington. Ellenberger gives all the credit to his staff and the extensive lab they have built in their new brewery as reasons for the quality and consistent beer. “Our staff pays the highest attention to the smallest details. The process must be the same every time, while always being evaluated for ways to improve. Beers like Velvet Tiger really show what our team is capable of making.”