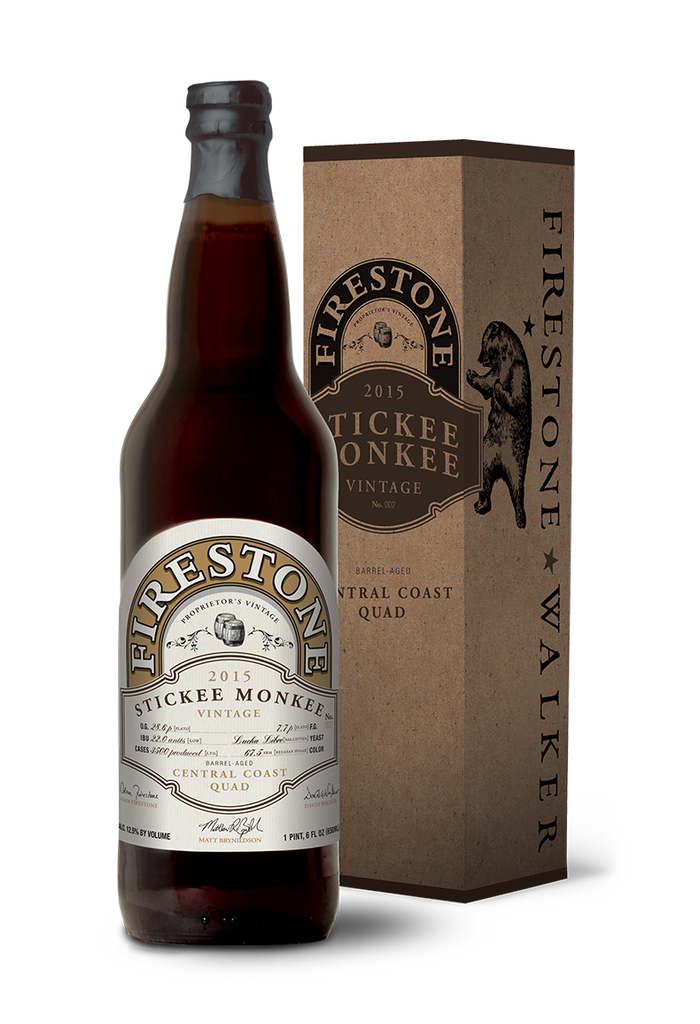 Paso Robles, CA: You could call it a bunch of Monkee business—a beer meticulously brewed in the classic Belgian Quadrupel style, but aged for more than a year in retired bourbon barrels to create a stylistic outlier now known as a “Central Coast Quad.”

Such is the unlikely provenance of Firestone Walker’s 2015 Stickee Monkee, which is set for release on May 23. The 2015 vintage marks just the second bottled release of Stickee Monkee, following up on last year’s inaugural release.

“Some folks have questioned the moniker ‘Central Coast Quad’ that we assigned to Stickee Monkee, but we stand by it,” said Brewmaster Matt Brynildson. “We brew this beer true to the Quadrupel style right up until we rack it to barrels for our own local California Central Coast twist.”

He added, “The 2015 vintage turned out awesome, and I think a lot of people will go apes***t when they taste this Stickee Monkee.”

Brynildson said that the base recipe of Stickee Monkee aims to hit all of the targets of the hallmark Quadrupel style in terms of alcohol, residual sugar, and overall body. Accordingly, the beer is brewed with Belgian candi sugar, which drives the beer’s color and caramelized character.

“Belgian candi sugar is like something you want to pour on your waffles in the morning, and it’s what gives Belgian Dubbels and Quads their signature molasses sweetness,” Brynildson said.

As for aging the beer in bourbon barrels from Woodford Reserve, Elijah Craig and Four Roses, Brynildson believes it’s a perfect complement to the Quadrupel style. “The wood adds just enough interesting flavor and oak astringency to counterbalance the sweetness and keep it from being cloying,” he said.

In their youth, Quadrupels are known for exhibiting a signature spicy Belgian yeast quality. But when aged, the yeasty quality yields to more boozy sherry-caramel notes. “You don’t really get that youthful yeasty quality with Stickee Monkee,” Brynildson said. “Upon release, it’s more along the lines of a Quad that has been properly aged for five years.”

The name Stickee Monkee is a nod to the native Sticky Monkey flower that thrives in the mountains along California’s Central Coast, as well as a shout-out to the Belgian monks who pioneered the Quad style.

The 2015 Stickee Monkee is limited to 3,500 cases of 22-ounce bottles. It will be available in select markets across the United States. The suggested retail is $16.99.