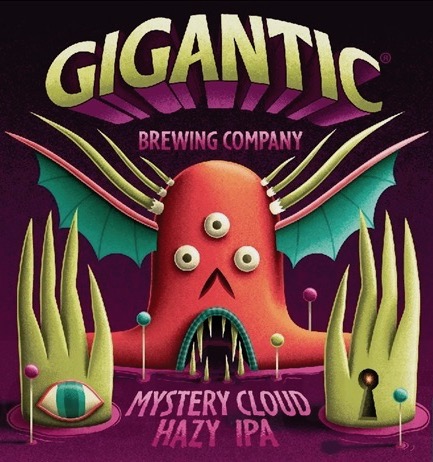 The month of January has seen Gigantic Brewing host a new series of First Taste Tuesday. When the final Tuesday of the month arrives next week on January 30th, Gigantic will tap its new Mystery Cloud Hazy IPA.

Mystery Cloud Hazy IPA is inspired the trendy from New England style IPAs with a bit of West Coast influence. The IPA is described as being super juicy, soft and fluffy IPA is loaded with citra, simcoe and crystal hops creating citrusy, tropical and dank deliciousness. Mystery Cloud Hazy IPA sits at 7% ABV and 56 IBUs.

From 3:00-9:00pm on January 30th, Gigantic Brewing will feature Mystery Cloud Hazy IPA on draft and in 500mL bottles at its Gigantic Taproom and Champagne Lounge. The beer will also be available in limited quantities through its Distributor Partners of Maletis Beverage in Metro Portland, OR, Bigfoot Distributing in Western/Central OR, Click Distributing in Western Washington and on Tavour.com.