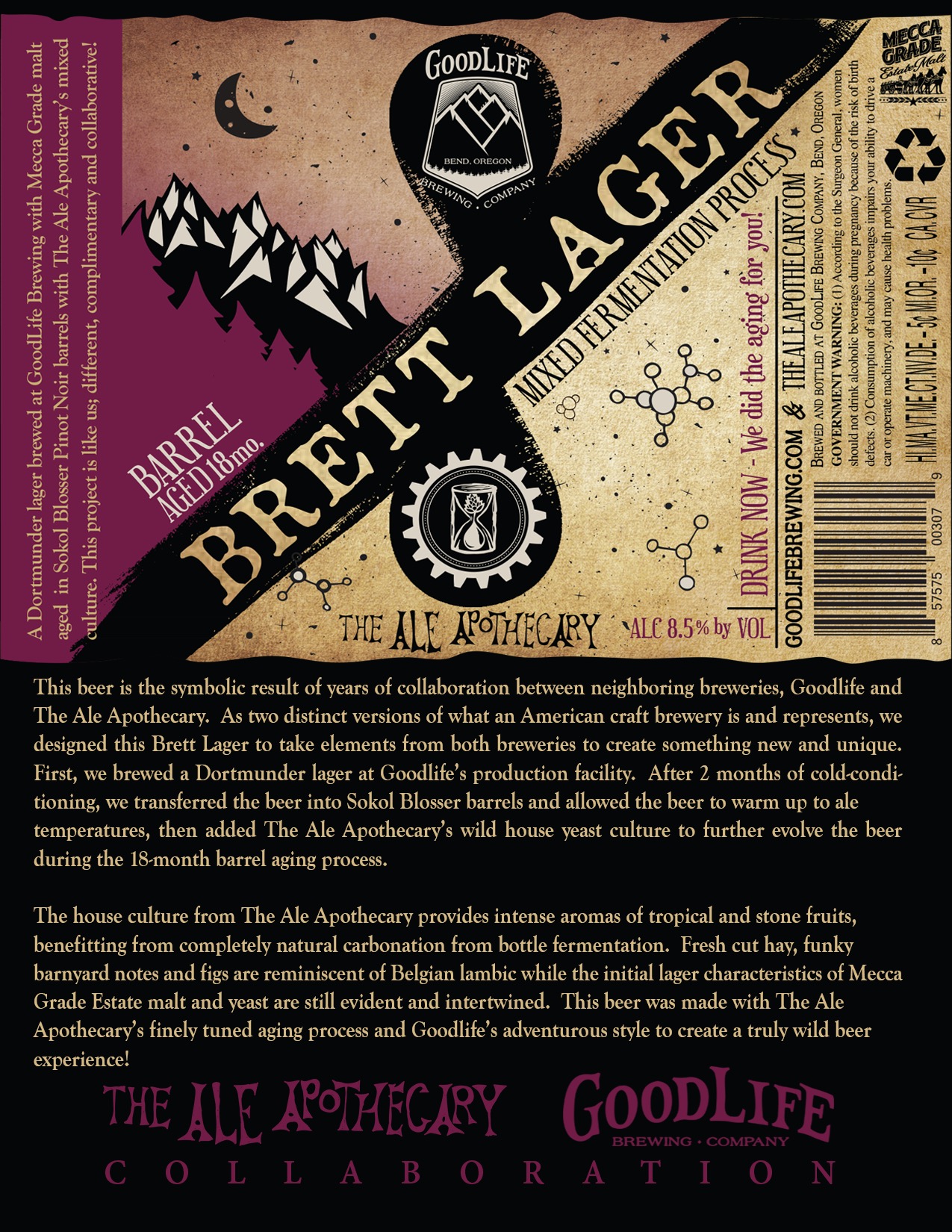 This year has been a challenging one at GoodLife Brewing. This past April the brewery lost its Brewmaster/Co-Founder, Curt Plants who suddenly and unexpectedly passed away. Plants missed the opportunity to see the release of a beer that he had been working on for the past few years with Paul Arney from The Ale Apothecary. Well now the beer that incorporated the talents from each brewer, Brett Lager, will see its release. In the coming weeks there will be release parties at Broken Top Bottle, The Bier Stein, Belmont Station, and Beerworks. Brett Lager is also available at each of the brewery’s tasting rooms that just happen to be a few steps away from one another.

More from the press release…

This beer is the symbolic result of years of collaboration between now neighboring breweries, GoodLife Brewing and The Ale Apothecary. As two distinct versions of what an independent American craft brewery is and represents, we designed this Brett Lager to take elements from both breweries to create something new and unique.

GoodLife Brewing’s Brewmaster/ Co-Founder, Curt Plants (who suddenly passed in April) always talked about a man in the woods who was creating some of the best beers in the world and he wanted to figure out a way to create a beer with him. Curt’s business partner and Co-Founder, Ty Barnett said, “This beer has been something Curt was working on for many years. We have known Paul, at The Ale Apothecary, since he opened it. It started by him needing a place to have materials shipped with a high dock and somewhere trucks could get in to in the winter. Then, between beers Curt and Paul began talking about a crazy collaboration.”

First, we brewed a Dortmunder style lager at GoodLife’s production facility. After 2 months of cold-conditioning, we transferred the beer into Sokol Blosser barrels and allowed the beer to warm up to ale temperatures, then added The Ale Apothecary’s wild house yeast culture to further evolve the beer during the 18-month barrel aging process.

The house culture from The Ale Apothecary provides intense aromas of tropical and stone fruits, benefitting from completely natural carbonation from bottle fermentation. Fresh cut hay, funky barnyard notes and figs are reminiscent of Belgian lambic while the initial lager characteristics of Mecca Grade Estate malt and yeast are still evident and intertwined. This beer was made with The Ale Apothecary’s finely tuned aging process and GoodLife’s adventurous style to create a truly wild beer experience!

Brett Lager will be available for sale at both The Ale Apothecary and GoodLife Brewing’s tap rooms, as well as limited distribution in Oregon, Washington, and Idaho. Bottle release parties are scheduled at the following locations:

Barnett also said, “Sadly, Curt was never able to try the final accomplishment. Having passed away in April, as you drink this delicious brew, cheers Curt and Paul for making this truly one of a kind beer!”

This beer is dedicated in loving memory to GoodLife’s Brewmaster/Co- Owner Curt Plants.