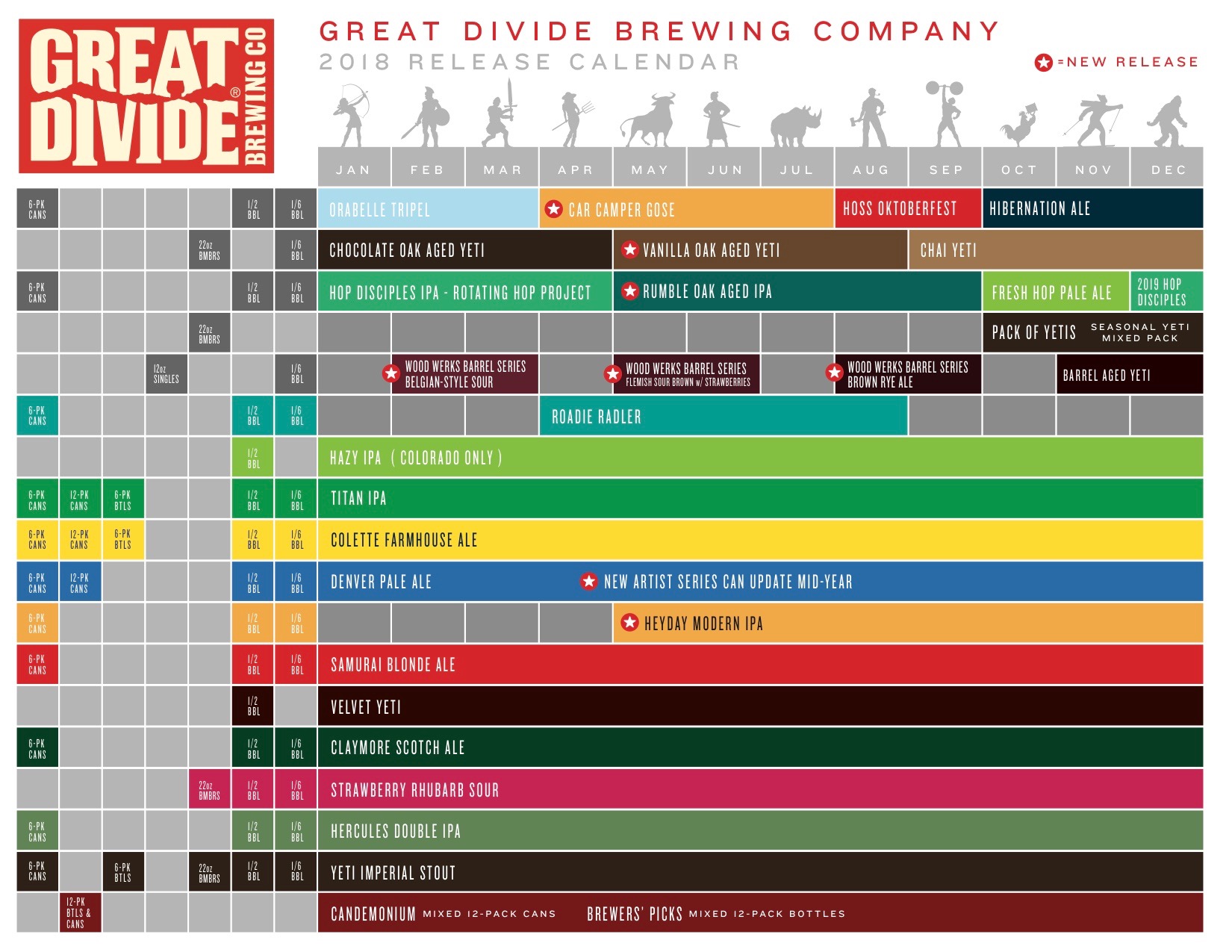 “We have an amazing lineup for 2018 with some new beers and familiar favorites,” said Brian Dunn, founder of Great Divide Brewing Company in a statement. “Whether it’s introducing Heyday IPA, experimenting with guava and passionfruit for Car Camper Gose or bringing back Roadie Radler after its tremendous success in 2017, we are confident about the exciting changes happening in 2018.”

Though many of these beers are being introduced for the first time, one is making a return after being retired in 2015. Rumble Oak Aged IPA was originally released in 2010 and will return in May as part of the seasonal Tank Farm Series.

“Rumble is a classic Great Divide beer and had quite the following in its day. It was originally retired to make room for new styles but as we were looking at new releases for 2018, it felt natural to reintroduce the beer as part of our Tank Farm Series,” said Dunn in a statement.

Here are descriptions on the new releases in 2018 provided by Great Divide Brewing.

Wood Werks Barrel Series
In 2018 we are starting fresh with a brand new barrel series. Wood Werks is our new lineup of limited edition barrel aged and sour beers. The new series kicks off in February with a Belgian-style tripel that was artfully soured for 15 months in red wine barrels and aged on plums. This rare spiced sour ale has notes of luscious stone fruit with a tart, dry finish, and hint of French oak. This first release will be followed by a Flemish Sour Brown Ale in May, and a Barrel Aged Brown Rye Ale in August.

Car Camper Gose
We have a new summer seasonal coming atchya! This German-style sour is brewed with guava and passionfruit and will be your go-to for all those car camping summer nights. Keep your eyes peeled for this essential summertime beer starting in April.

Rumble Oak Aged IPA
We heard your pleas for the return of Rumble loud and clear. In 2018, we are re-releasing this Great Divide classic as part of our Tank Farm series. This relatively straight-forward West Coast-style IPA with subtle nuance will be available in 6-pack cans from May through September.

Vanilla Oak Aged Yeti
The name’s Yeti, Vanilla Yeti. That’s right, a brand new Yeti is coming to town. Another extension of our Yeti clan, Vanilla Oak Aged Yeti is the next flavor evolution for our cherished imperial stout. Sweet vanilla tones meld into the oak characteristics as the two flavors support and enhance one another. A pairing fit for a beast, the vanilla and oak are uplifted by the bold and roasty character we all know and love from Yeti.

Heyday Modern IPA
We’re excited to introduce a new IPA to our portfolio in 2018! Don’t get us wrong, we love our cherished Titan, but we figured it was time to introduce a different adaptation of the ever-popular style. What’s a Modern IPA you ask? Well, we brewed this beer in response to the shift in taste profile preferences of the modern IPA drinker. It’s slightly hazy (but not a hazy IPA) with abundant hop flavor and aroma of tropical fruit, berry, and melon. This contemporary IPA brings the multifaceted hop profile to the forefront without the expected bitterness and with a lighter body. It’s not “New England” or “hazy” or “west coast” or “English-style”, or “classic”, and it’s definitely not Titan. It’s a modern IPA. Balanced and approachable, Heyday IPA is brewed for the modern Bold Character.