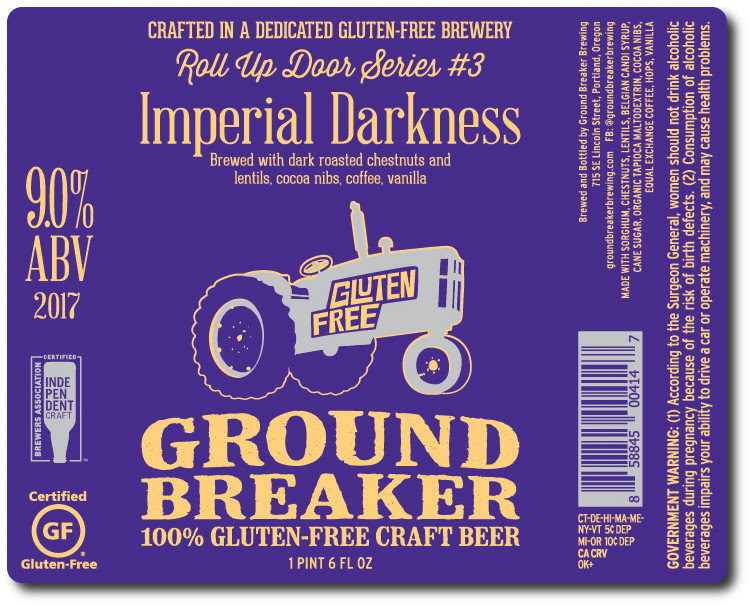 Ground Breaker Brewing, Portland’s only gluten-free brewery, has just released its big, bold Imperial Darkness in 22 ounce bottles. This release also marks the first beer label that we have seen from a Portland brewery that is using the new Brewers Association Independent Craft Brewer Seal.

Imperial Darkness is a 9% ABV imperial stout that was initially released in January and was sold exclusively through their Gastropub location in Portland, Oregon and online through Bring on the Beer.

“This recipe was over a year in development,” remarked James Neumeister, head of R&D at Ground Breaker in a statement. “Our first release was exclusively for our Yes We Can! Kickstarter Release Party. We released it under our Roll Up Door Series earlier this year, and we’re excited to give this Roll Up Door Series beer the wide distribution it deserves.”

Imperial Darkness is made with deeply roasted chestnuts, lentils, and cacao nibs. Fermented with generous amounts of vanilla and cold-brewed Equal Exchange coffee, Imperial Darkness has a complex wave of cocoa, coffee, vanilla, and caramel flavor and aroma. At 62 IBUs the use of Nugget and Willamette hops provides just enough bittering for a well-balanced imperial stout.

“We’ve been doing ingredient research with our Taproom Exclusives since we opened,” said Tyler Kueber, head brewer at Ground Breaker in a statement. “It’s exciting to take all that we’ve learned with flavor, aroma and technique on the small batch system and scale it up in production.”

Then when discussing this new wider distribution Kueber goes on to add in a statement, “Each bottle of Imperial Darkness is taking the flavor experience of our small batch brews that are found in the pub and distributing those flavor experiences to our fans in other states and even other countries.”

Imperial Darkness began shipping to Ground Breaker distribution footprint that includes OR, WA, ID, CA, VT, ME, BC and AB Canada, and Japan.