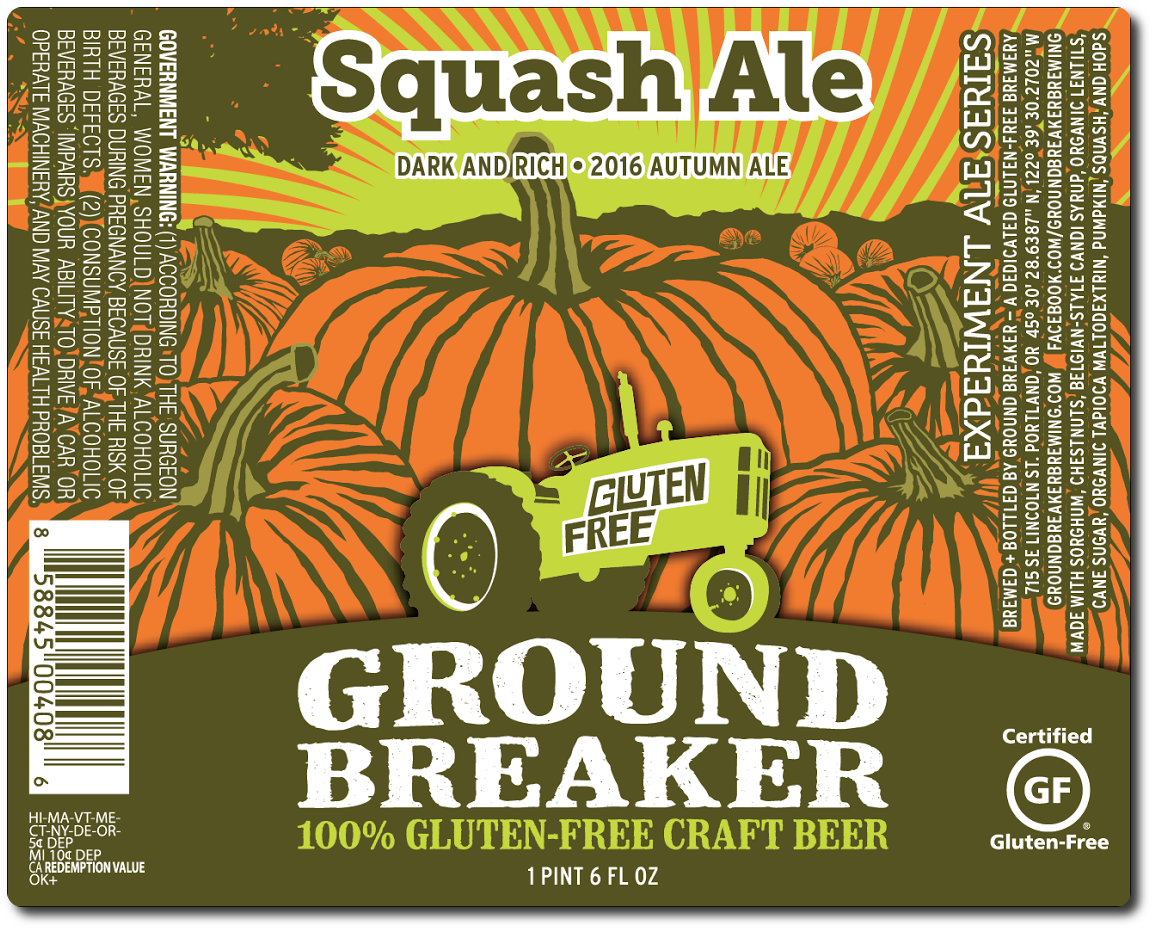 (Portland, OR) – Autumn! The harvest, the beautiful leaves, the cool weather, and of course, the beer. Ground Breaker Brewing is releasing their annual batch of Squash Ale, a unique gluten-free beer made with over three hundred pounds of locally grown squash from family-owned and operated Love Farm Organics. This is the brewery’s sixth release of the year in their Experiment Ale Series.

Boasting over twenty-five pounds of Connecticut Field and Sugar Pie pumpkin per barrel, Squash Ale is crafted with a unique production process that makes it unlike other seasonals. After being picked, the squash is sliced, quartered, seeded, then roasted in a giant oven at Jensen’s Bread & Bakeries, a local dedicated gluten-free bakery.

Ground Breaker’s one-of-a-kind seasonal is “triple-squashed.” Squash is added to the mash tun, boil kettle, and fermenter. Seeds are toasted, crushed, and also added to the mash. The ale has a “wet-squash” addition to the fermenter which consists of squash that has been slow roasted for several days into a creamy squash butter.

“It’s a difficult beer to make, it’s a long process. We make it because we love it and our customers love it,” commented James Neumeister, Ground Breaker’s head of R&D. “It is one of the few beers in our Experiment Ale Series that we release every year.”

About Love Farm Organics
Established in 2006, Love Farm is a family-owned and operated, organic community supported agriculture farm in the foothills of the Coast Range near Portland, Oregon. They organically grow a wide assortment of vegetables, fruits, herbs and some flowers throughout their growing season of late May through early November.
http://www.lovefarmorganics.com/
https://www.facebook.com/LoveFarmOrganics

About Jensen’s Bread & Bakeries
Jensen’s Bread and Bakeries is the brand name of bread products proudly made by Gluten Free Concepts L.L.C., a wholesale gluten-free baking company located in Portland, OR. In their dedicated and certified gluten-free facility, Jensen’s specializes in baking bread and buns that many people say are the BEST they’ve EVER tasted. Co-founders Debbie and Dave understand how important taste, texture and quality are to the gluten-free community because they are gluten intolerant themselves. Since June of 2010 they have successfully provided incredible gluten-free products to the food service industry and selected retail outlets throughout the Pacific Northwest.
http://jensensbread.com/
https://www.facebook.com/jensensbreadandbakeries