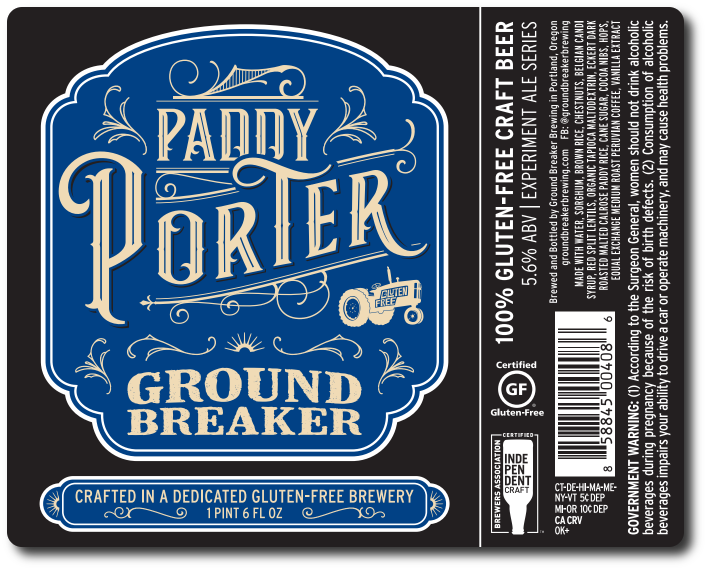 For its first new release in 2018, Ground Breaker Brewing has released Paddy Porter. This new beer is the first one brewed by Ground Breaker that uses dark roasted rice malted from Jim Eckert of Eckert Malting based in Chico, California.

Paddy Porter is a 100% gluten-free beer that pours a medium body with a thick creamy head. It is made with roasted chestnuts, roasted lentils, cacao nibs, and dark roasted rice malt from Eckert Malting.

“We’re always looking for additional ingredients to integrate into our brewing process,” said James Neumeister, Head of R&D at Ground Breaker in a statement. “When we first began distributing in California I visited Jim and tried his beers. Since then it’s been an aim of ours to find a place to use his malted rice products.”

When it comes to brewing a porter, this is a beer style that the brewery has wanted to brew for a quite some time. However this style is not so easy when you are a 100% gluten-free brewer.

“Dark beers are the most challenging beers to brew gluten-free,” said Tyler Kueber, Head Brewer at Ground Breaker in a statement. “Some of the flavors and aromas can be difficult to achieve without barley. With Eckert’s rice malts we are able to bring a lot of that complexity to the beer.”

Paddy Porter is available on draft and in a 22 ounce bottle begging this week.