Just in time for St. Pattrick’s Day today, Guinness has released a few new beers that complement its iconic Guinness Draught. Already in the marketplace is its Guinness Milk Stout and just beginning to hit store shelves is its new Guinness Irish Wheat.

Currently hitting store shelves from Guinness is its new Guinness Irish Wheat. This unfiltered hazy wheat beer is brewed using 100% Irish grown wheat along with the same legendary yeast found in Guinness Draught. Aromas of clove and banana first hit your senses as these two attributes continue when you begin to taste this traditional wheat beer.

Brewed at St. James Gate and created by one of Guinness’ German brewers, Jasmine Winterer, Irish Wheat is crisp and refreshing that contains a slight hint of citrus that will make this an easy six-pack to enjoy in the coming warmer days.

Already on store shelves is Guinness Milk Stout that is part of The Brewers Project Pack. Milk Stout pours a jet-black appearance with a frothy dark tan head. The stout offers up a strong roasty aroma and flavor that is followed by a strong presence of chocolate.

What It Is: Guinness Milk Stout is a full-bodied stout with a thick, creamy mouthfeel and aromas of roasted malt, milk chocolate and rich coffee. The roasted barley and hops used in the brewing process give this stout a warming bitterness that gets balanced out by the noticeable sweetness from the milk sugars added to the kettle. Guinness recommends pouring this into a Guinness Gravity Glass to allow for the most pleasurable experience. 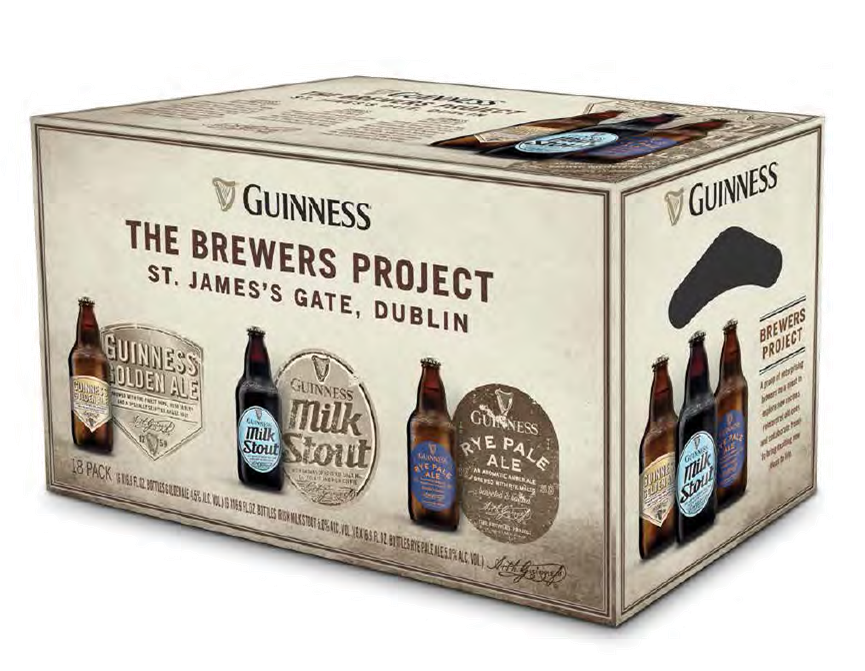 And as we enter St. Patrick’s Day weekend, Guinness continues its quest to raise funds for its Guinness Gives Back Fund, which supports nonprofits that contribute to the common good in our communities. Launched a few weeks back, #StacheForCharity encourages Guinness drinkers to show off their foamy mustache on social media. For each photo tagging @GuinnessUS and using #StacheForCharity, Guinness will donate $1 (up to $100,000) to the Guinness Gives Back Fund through Sunday, March 19, 2017.

“Let’s face it, now’s as good a time as any to raise a pint,” stated Guinness Brand Director Emma Giles in a release. “We need to reconnect with what can bring us together as family, friends, coworkers, Americans, and most basically, human beings. St. Patrick’s Day is almost here and few, if any, holidays are as unifying or as celebratory.”

“There’s just something about the Guinness ‘Stache that makes you crack a smile,” continued Giles in the release. “What better symbol this time of year for unity, communion and giving back?”