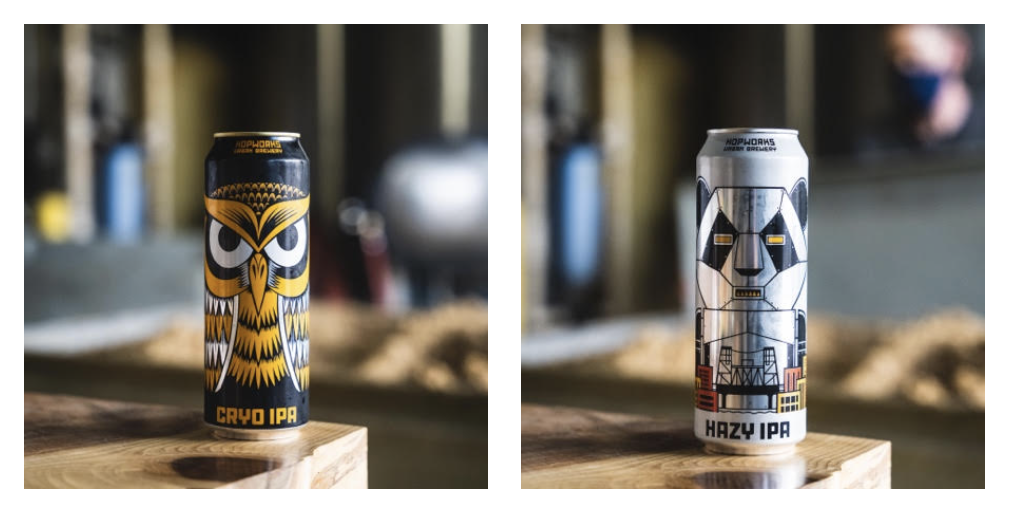 PORTLAND, Ore.—May 4, 2021—Hopworks Urban Brewery (HUB), the first B Corp brewery in the Pacific Northwest, has released two of its year-round beers in 19.2oz cans. Powell Cryo IPA and Robot Panda Hazy IPA are now available in 19.2oz cans in addition to draft and 12oz cans in select retail locations and both the Powell Mothership at 2944 SE Powell Boulevard in Portland, and HUB Vancouver located at 17707 SE Mill Plain Boulevard in Vancouver, Washington.

“Not only is the 19.2 oz oversize can the perfect solution for those of us who are ‘just having one!’ it also offers more surface area for improved grip when rallying through the outdoors,” said Christian Ettinger, founder and brewmaster at Hopworks. “I can’t wait to surprise friends and stoke strangers with two of my favorite HUB IPAs at the trailhead after my next ride!”

Powell Cryo IPA
Our flagship IPA celebrates our Powell Boulevard brewery and features an owl on the can. Powell IPA brims with melon, tropical fruit, and a touch of dank with a perfectly balanced bitterness. Powell IPA has an ABV of 6.4% and IBU of 75.

About Hopworks Urban Brewery
Founded in Portland, Oregon, in 2008 by Christian and Brandie Ettinger, Hopworks Urban Brewery creates world-class beer and food with sustainable business practices that protect the environment and support the community. Family-owned and operated, Hopworks sources thoughtfully, operates efficiently and minimizes waste to protect the planet. The company’s 20-barrel brewery produces 10,000 barrels of beer a year for Hopworks’ brewpubs and distribution throughout Cascadia. Hopworks is the first Certified B Corporation brewery in the Pacific Northwest.
HopworksBeer.com | @hopworksbeer