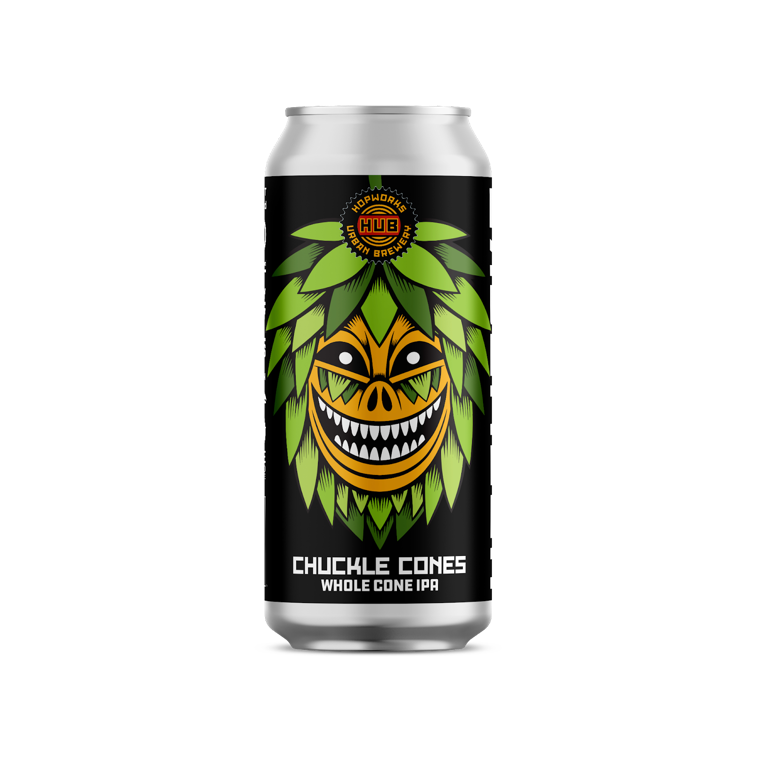 Portland’s B Corp brewery, Hopworks Urban Brewery (HUB), has a new IPA with a slight twist that’s hitting the marketplace. On its latest release, HUB has brewed Chuckle Cones Whole Cone IPA that uses whole cone hops in part of its brewing process.

Chuckle Cones Whole Cone IPA is described by HUB has being well-balanced and a flavorful IPA the offers a rich golden hue and aromas of peach, pineapple and sweet orange. The beer features guava and apricot hop flavors with a balanced finish. The name is a nod to the whole Chinook and Idaho 7 hop cones added in the hop back during brewing, which puts the fruity terpenes front and center.

Sitting at 6.7% ABV and 66 IBUs, Chuckle Cones Whole Cone IPA is brewed and fermented with Cascade, Centennial, El Dorado and Mosaic hops, with whole cone Chinook and Idaho 7 hops in the hop back.

“This beer was fun to make, as a callback to earlier days of brewing before hop pellets,” said Ryan Pappe, head brewer at Hopworks, in a statement. “Adding those whole cones in the hop back gives Chuckle Cones next-level fruity, citrusy flavors and aromas that just make you want to keep tasting!”

Chuckle Cones Whole Cone IPA is available as a limited release through the month of May on tap and in 4-pack, 16oz cans at grocers, bottle shops, and at Hopworks’ two locations on SE Powell Boulevard in Portland, Oregon and SE Mill Plain Boulevard in Vancouver, Washington.