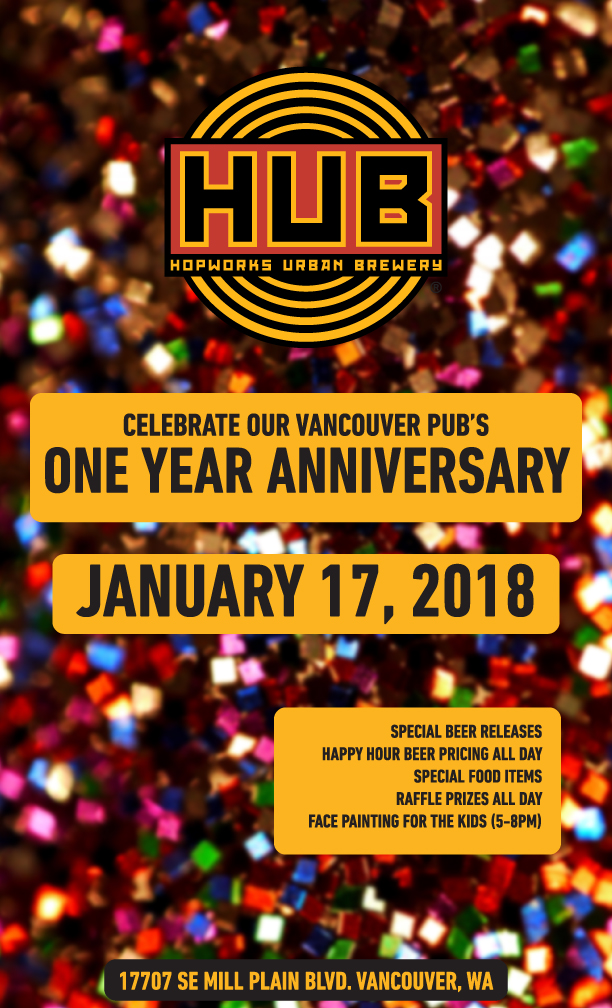 One year ago Hopworks Urban Brewery opened its first location north of the Columbia River in Vancouver, Washington. To honor this milestone Hopworks will celebrate its Vancouver location’s One Year Anniversary on Wednesday, January 17th.

For its One Year Anniversary HUB is releasing three new Vancouver-brewed beers: Pillow Fight NEIPA, Lacamas Porter, and a Vancouver-only Secession Cascadian Dark Ale. Best of all is that while enjoying these three new beers brewed by Matt Speckenbach is that the beers will be happy hour priced all day long.

HUB is also preparing a number of new food specials along with giving away Mug Club Memberships to a guest every couple hours and raffles throughout the day. And from 5:00-8:00pm there will be free face painting for the kids.

Pillow Fight NEIPA – We took VIPA (Vancouver IPA) but clipped the bite from its fangs and re-imagined it as a New England-Style IPA. Super hazy and super aromatic without the bitterness of it’s big brother. This one goes down easy with nothing to stand between you and your next sip.

Lacamas Porter – A porter with rich sweetness, an abundance of chocolate malt, and a sturdy body. This beer will taste fantastic on those hard and cold winter nights.