Taking a page from the books of malt liquor and lower end beer producers, Lagunitas Brewing is set to release a new beer in the street worthy 32 ounce bottle. The latest beer to join the brewery’s 2017 OneHitter Series is Sakitumi, an ale brewed with Sake yeast and rice.

From sampling this behemoth of a beer or as Lagunitas calls it, “Big Boy Bombers”, Sakitumi offers up a dark straw color with some sweetness most likely from the rice. There’s also some alcohol warmth to this beer.

Sakitumi Description:
This Raging Bull’uva Double-ish IPA is punched with Sake Yeast and Rice, then hopped-up for a cold-clip of counter-balanced bitterness… it just don’t mean a thing if it ain’t got that swing!
ABV 9.0%
O.G. 1.079
IBU 42
Aug – Sept 2017 in 32 oz. bottles and on tap 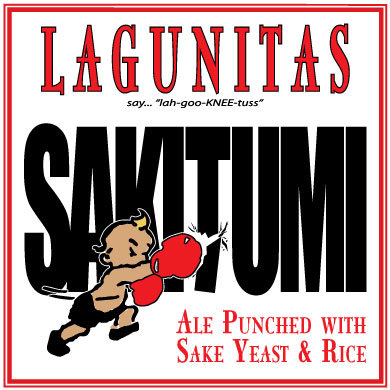 The label writings from Tony Magee state, “Be it the Beast from the East, Raging Bull, the Count of Monte Fisto, an Italian Stallion, The Bonecrusher, The Executioner, The Body Snatcher, The Greatest, the Cincinnati Flash, the Dogtown Dynamo or Nonpareil,… it just don’t mean a thing if it ain’t got that swing (sorry about the, Floyd). Knock this back with a friend. Cheers!”

We tend to agree with Tony’s last words, definitely advisable to share Sakitumi with a friend when opening this 32-ounce bottle!