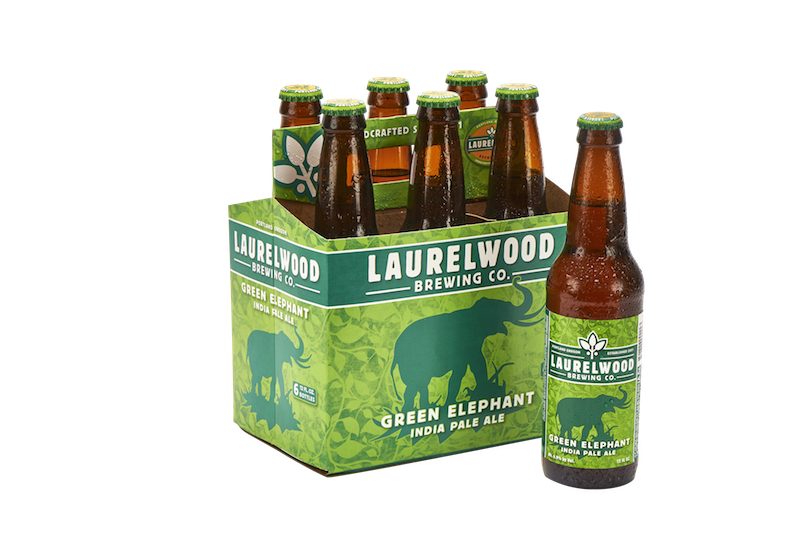 A few months ago Laurelwood Brewing offered its first seasonal beer in 12 oz six-packs with its Vinter Varmer Brown Ale. Now with the upcoming season change into spring, Laurelwood will be offering up its classic Green Elephant IPA in six-pack bottles.

Laurelwood’s first foray into six pack bottling began two and a half years ago with a contract brewing agreement at Redhook Ale Brewery in Woodinville, Washington. This is when Laurelwood first began packaging its 12 oz bottle six-packs of Workhorse IPA and Free Range Red. We had the opportunity to be the first to sample these bottles freshly off the bottling line and were very impressed. The agreement helped position these two beers at grocery and convenience stores for strong sales in the six-pack market segment. It also allowed the brewers at Laurelwood to offer more rotating seasonals as this contract brewing opened up valuable tank space at its NE Sandy brewery.

Now this contract brewing at Redhook is coming to an end. Laurelwood will soon shift its Workhorse IPA and Free Range Red production to Full Sail Brewing in Hood River, Oregon. From speaking to James Buxman, Marketing Director for Laurelwood Brewing Co., yesterday he mentioned that Laurelwood’s Head Brewer Shane Watterson is quite happy with the brewing quality out at Full Sail and hopes to get these beers in the tanks out there very soon.

But before this change over takes place Laurelwood recently bottled its first run of Green Elephant IPA in 12 oz bottles at its brewery. The brewery’s confidence was stronger to take on a project like this internally after its own canning of its Red Elephant India Red Ale this past summer. This was the first time that the brewers of Laurelwood took on packaging of this scale for a beer that was packaged in a bottle smaller than 22 ounces. With the release of Green Elephant IPA this will bring four total offerings from Laurelwood in the 12 oz package size.

Green Elephant IPA boasts big pine, floral, and citrus hop flavors, while remaining a wonderfully drinkable IPA. “Green Elephant IPA has remained a favorite since it hit the scene in 2003, so six-packs was a natural next step,” stated James Buxman in a news release. “We have some exciting releases planned this year and Laurelwood fans can expect to grab more of our beers by the sixes.”