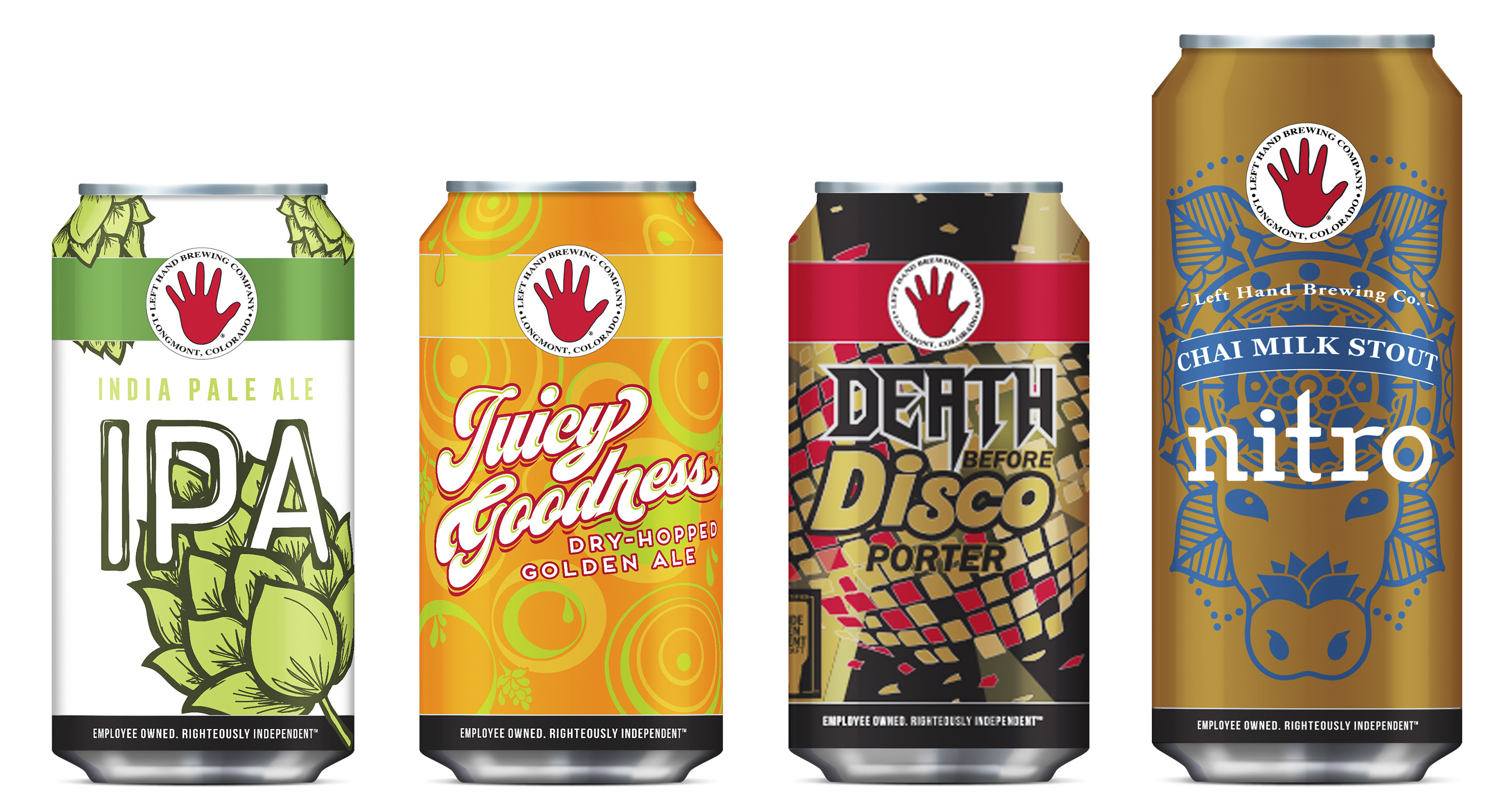 As we begin to see new beer releases for the upcoming year, Left Hand Brewing has just released its 2018 Beer Release Calendar. Many of the brewer’s popular beers return along with a few new releases that includes Left Hand IPA, Juicy Goodness, Death Before Disco, and Chai Milk Stout Nitro.

For 2018, Left Hand introduces four new year-round beers in 12oz cans. Juicy Goodness dry-hopped golden ale, Left Hand IPA, Death Before Disco porter and Colorful Colorado pale ale will join the perennial lineup with award-winning mainstays like Milk Stout and Polestar Pilsner. Juicy Goodness is a hazy golden ale which is dry-hopped with fruity hops. The aromatics and flavor of the Left Hand IPA are dominated by a blend of tropical fruit characteristics and citrus tang. Colorful Colorado pale ale will be available in their home state of Colorado and in select can Mixed Packs throughout the year. The can Mixed Pack will also feature seasonal, small-batch “Test Kitchen” beers with recipes concocted by a team of brewers on the brewery’s pilot system, a seven-barrel system constructed to inspire creativity and innovation.

In addition to the return of Well Played red IPA with experimental hops, and the Les Quatres Saisons seasonal series with Colorado native ingredients like chokecherries, 2018 will feature a variety of new seasonal and limited cans intended to please the palate with culinary and cocktail-inspired flavors. MS Gose Away, a perfectly salty and lightly sour beer with raspberries and lemon peel will debut in late spring, Peach Beerllini radler will be just-in-time for the hot summer months and a pepper porter with chipotle and other mild peppers will liven up your mood come winter. 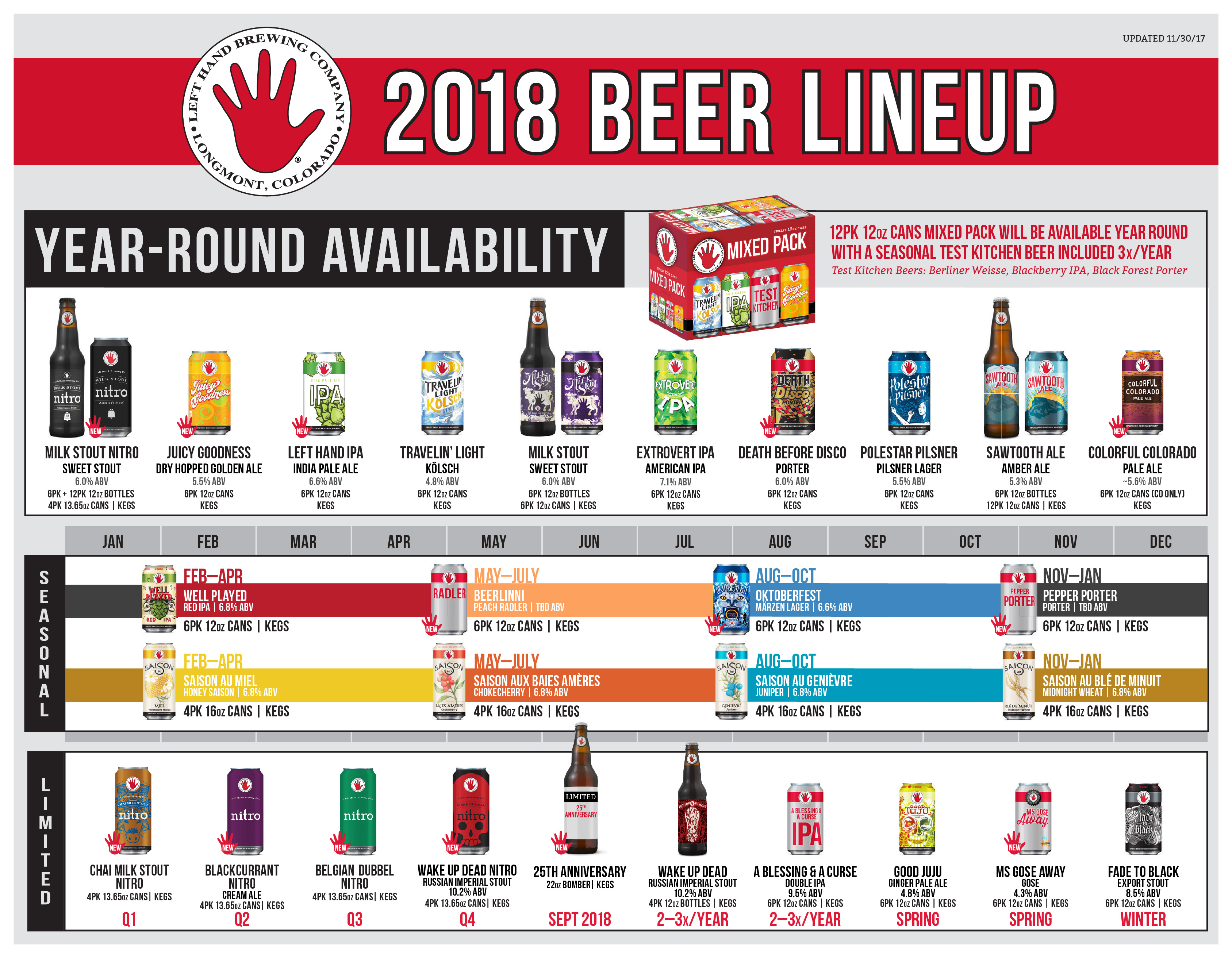 As the craft leader in nitrogenated beers and on the heels of the first-ever US produced nitro can, with Ball Corporation’s Widget Inside™ technology and their infamous Milk Stout Nitro, Left Hand will now offer a seasonal line of smooth nitro-perfected styles. Chai Milk Stout Nitro, Blackcurrant Cream Ale Nitro, Belgian Dubbel Nitro and the coveted Wake Up Dead Nitro will be featured in their respective quarters and will offer a creamy experience to be enjoyed right from the can.

In addition to exciting new beers, Left Hand will celebrate twenty-five years of brewing in 2018. From a humble homebrew kit in 1993 to being a craft beer innovation leader, with America’s original nitro bottle and the first production run of US made nitro widget cans, Left Hand has continued to grow and innovate throughout their twenty-five-year history and will celebrate with a 25th Anniversary 22oz bomber in September.

Beer is not the only thing Left Hand will brew up this year. The employee-owned company will continue their mission of giving through the Left Hand Brewing Foundation’s “High Five” events, like Hops and Handrails and Nitro Fest, and via their Team Left Hand, Bike MS fundraising activities – which has raised over $2.8 million dollars since 2008. MS Gose Away is a collaboration between Team Left Hand and the National MS Society’s Bike MS in their shared mission to Crush MS. Team Left Hand will participate in five Bike MS rides across the country in 2018 and will host several fundraising events throughout the year.