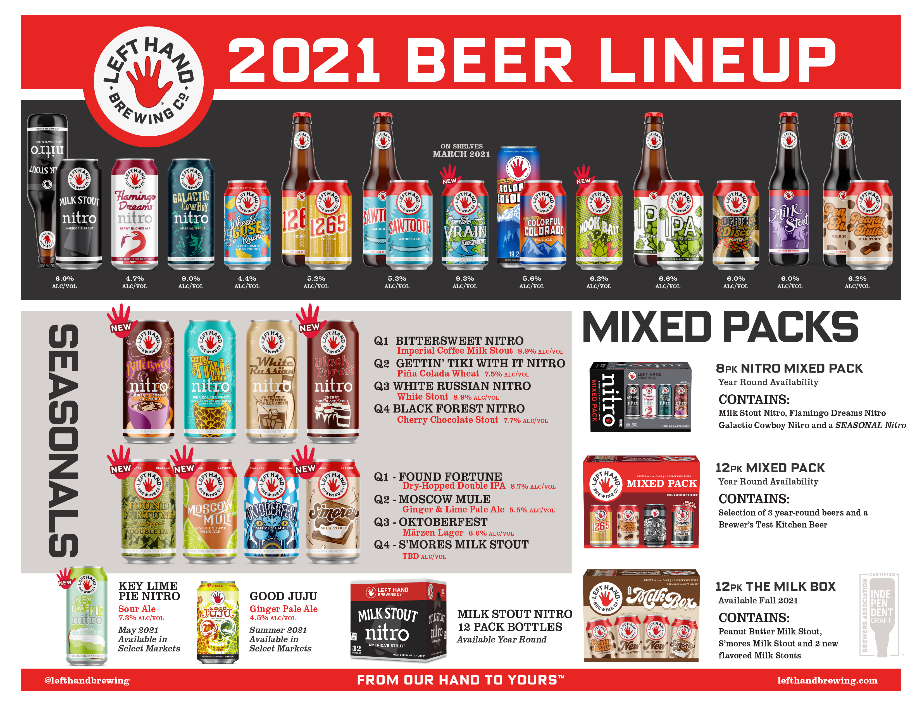 LONGMONT, Colo. Dec. 8, 2020 – Left Hand Brewing Company, one of the original pioneers in craft beer, is announcing their 2021 Beer Lineup packed with 12 new beers plus the long-anticipated return of two fan favorites. Highlighting the lineup, the brewery is reintroducing Bittersweet Nitro Imperial Coffee Milk Stout as a seasonal this January, and St. Vrain Tripel Belgian-Style Golden Ale as a year-round this March. Both beloved brands will be available for the first time ever in cans, and fans are already sharing their excitement. In addition, the leaders in Nitro beer and technology showcase their continued innovation in the space with Key Lime Pie Nitro, a Nitro sour coming for a limited time this spring, and Black Forest Nitro debuting as a seasonal in late fall.

St. Vrain Tripel is one of Left Hand’s most critically acclaimed brews. The last release of their Belgian-Style Golden Ale was rated the #1 American Tripel in a blind tasting by Paste Magazine. Named after the river that winds alongside the brewery, St. Vrain is designed to pay homage to classic Belgian Tripels while adding a uniquely local twist. Colorado barley creates a subtle malt sweetness, and American hops bring rich herbal and floral aromatics, both perfectly complimenting the warm spice and fruit character of the Belgian yeast. Previously only sold in bombers, St. Vrain Tripel starts shipping this March in 6-packs of 12oz cans. The 6-pack package will give consumers great value for such a well-received beer at 9.3% ABV.

Rich and robust, Left Hand’s first seasonal offering of the year is Bittersweet Nitro Imperial Coffee Milk Stout. A special blend of dark roast coffee weaves rich berry notes with spicy undertones into the 8.9% Imperial Milk Stout. Bittersweet Nitro is the single most requested archive beer from Left Hand, inspiring a social media campaign by fans for the brewery to re-release the brand. Their request has been answered with bold new artwork and new packaging. Previously only available in bottles, Bittersweet Nitro will now be available in 4-packs of 13.65oz widget cans. 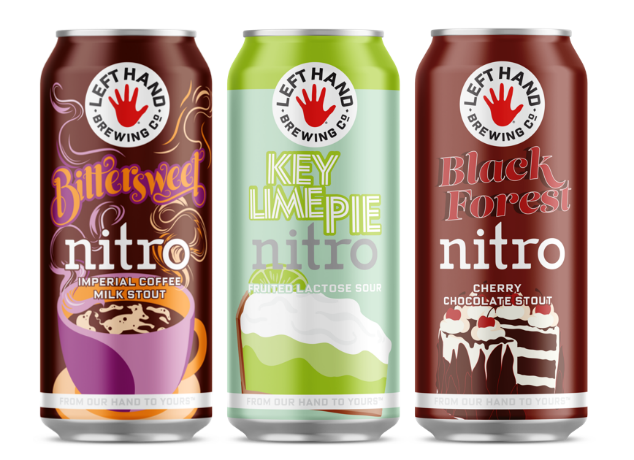 Key Lime Pie Nitro is a 7.3% sour ale with lactose and lime, vanilla and cinnamon. Super smooth and silky, the beer is modeled after the citrusy, velvety dessert. Tartness and baking spice combine with a creamy Nitro mouthfeel, each sip mimicking a spoonful of Key Lime Pie. This limited time Nitro beer ships this May in 4-packs of 13.65oz widget cans.

Also new in Nitro seasonals this year is Black Forest Nitro. Real cherries and chocolate combine with a rich roasted malt backbone, reminiscent of a Black Forest cake. This Cherry Chocolate Stout comes to market in Q4 in 4-packs of 13.65oz widget cans.

Gettin’ Tiki With It Nitro will return in the spring and White Russian Nitro abides again in late summer, rounding out the Nitro seasonal lineup.

Found Fortune showcases El Dorado hops, inspiring its name. The 8.7% Double IPA is dry-hopped with El Dorado, Galaxy, and Citra, resulting in a wealth of candied orange, juicy tropical fruits, and notes of fresh-squeezed grapefruit. Moscow Mule Pale Ale is crisp and effervescent at 5.5% with a refreshing burst of lime and a spicy ginger kick, delivering the vibrant flavors of the classic cocktail with the body and hop benefits you can only experience in a beer. Due to its success as a “Crazy Limited” Test Kitchen Beer in their Can Mixed Packs, Left Hand is now offering this beer as a stand-alone. The announcement of S’mores Milk Stout heralds Left Hand’s first new Milk Stout variant planned for 2021. Their classic recipe meets your favorite campfire treat in this Milk Stout with marshmallows and spices hitting shelves late fall.

The brewery’s renowned and popular Oktoberfest Märzen completes the lineup and all four seasonal CO2 beers will be available in 6-packs of 12oz cans.

For fans that are looking to experience several of Left Hand’s new and long-time favorites at once, Left Hand continues to release a Nitro Mixed 8-Pack and CO2 Mixed 12-Pack year-round, with the lineups changing quarterly. Find two beers each of four different Nitro styles in the Nitro Mixed Pack, always including the latest seasonal release. The CO2 Mixed Pack features three year-round favorites accompanied by a “Crazy Limited” Brewer’s Test Kitchen beer. These small batch passion projects from the Left Hand brewing team change quarterly with the first two offerings being a Pecan & Cranberry Brown Ale and a Dry-Hopped Pineapple Ginger Sour.