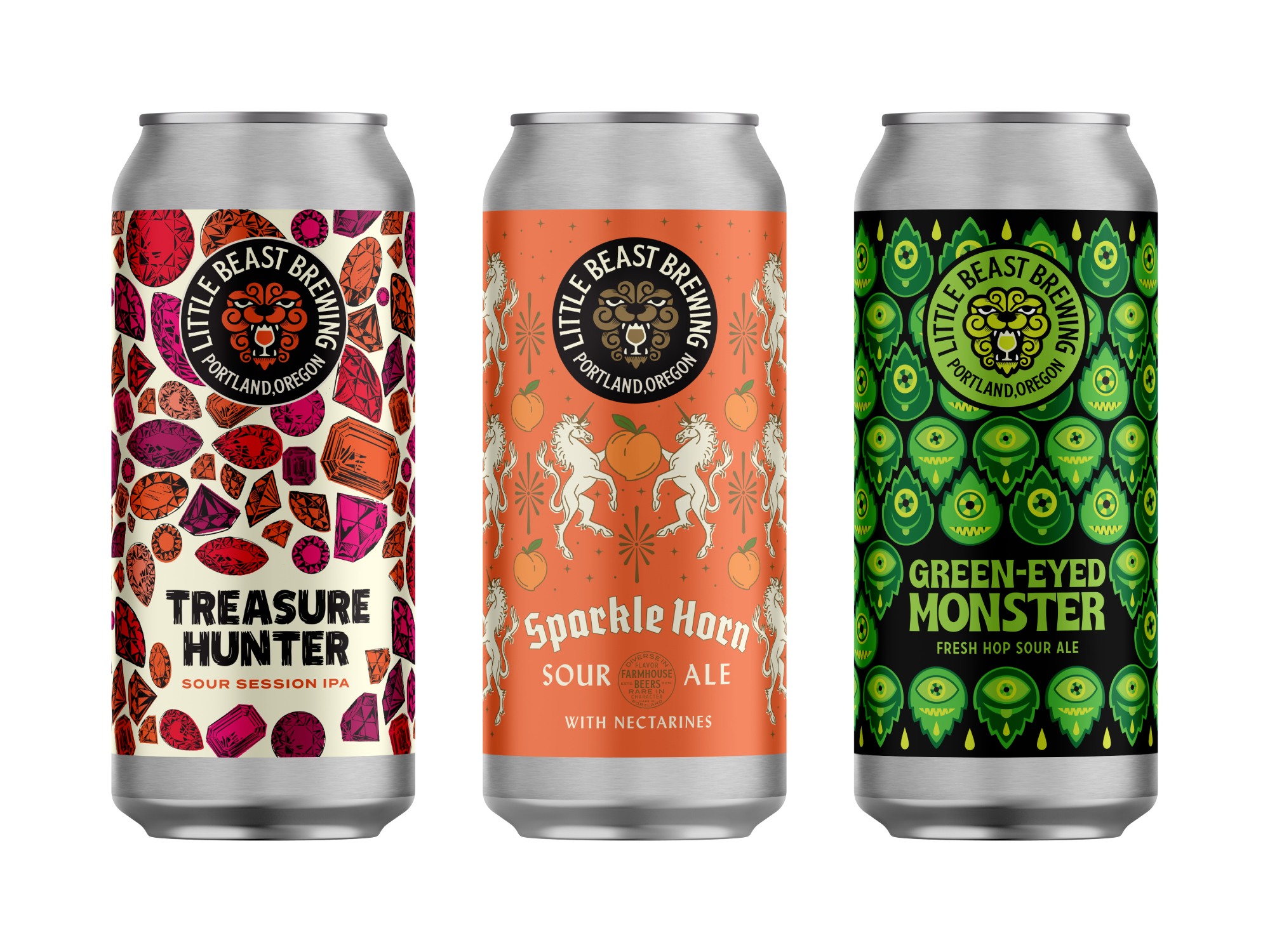 The month of September will bring four new beers to the market from Little Beast Brewing. The Clackamas based brewer will release Sparkle Horn, Treasure Hunter, and Green-Eyed Monster in 16oz cans and on draft this month. Little Beast will also release Fresh Hop IPA, a collaboration beer that was brewed with Our Mutual Friend Brewing from Denver, Colorado, on draft later this month.

The three canned beer, all sour ales will be available in limited 16oz 4-packs and draft. Here are additional details and tasting notes on each of the four beers provided to us from Little Beast Brewing…

Sparkle Horn and Treasure Hunter – September 11th, 5:00pm
Sparkle Horn Nectarine Sour and Treasure Hunter Sour Session IPA are both sour ales available on draft and in limited 16oz cans. The beers are soured naturally during two distinct fermentations–the first with lactobacillus, and the second with saccharomyces, which is added to the first fermentation during high krausen. Each beer has varying levels of acidity and are unfiltered and unpasteurized when canned.

With 500 pounds of fresh fruit from Parkdale, on the North side of Mt. Hood, added to the beer, Sparkle Horn Nectarine Sour Ale is full of stone fruit flavor. At 5.5% ABV the beer is light and zippy, with a soft and delicate tartness that complements the fruit. From one batch of beer, the brewery packaged 100 cases and limited kegs, which will be sold at Little Beast’s SE Portland pub and in a handful of bottle shops in Oregon and Washington. Four-packs cost $20.

Treasure Hunter, a sour session IPA, is the brewery’s newest seasonal release. Of the sour ales released this month from Little Beast, Treasure Hunter has the most pronounced tartness. The lemony acidity mingles nicely with the flavors of pineapple and stone fruit that comes from dry hopping the beer with El Dorado and Simcoe hops. Treasure Hunter is available until January and replaces Wolf Camp Hoppy Saison in Little Beast’s seasonal rotation.

Green-Eyed Monster – September 18th, 5:00pm
Green-Eyed Monster is a fresh hop sour ale brewed in collaboration with New Seasons Market,  and represents the first of two fresh hop beers this year from Little Beast. Crosby Hop Farm’s Centennial fresh hops were added on the hot side in the whirlpool, and the beer is wet hopped with Crosby’s fresh Comet hops. Similar to Sparkle Horn and Treasure Hunter, the beer undergoes a natural souring process. The acidity levels were dialed back a bit in order to create a balance between the fleeting melon-like characteristics of fresh hops. Cans of Green-Eyed Monster can be found in every Oregon and Washington New Seasons Market shortly after the release of the beer. Highly limited draft and cans are also available at the Little Beast year round beer garden.

Fresh Hop IPA – Release Date TBA
Brewed in collaboration with Our Mutual Friend Brewing in Denver, Colorado, the recipe for the beer was written by OMF co-founder Jan Chodkowski and highlights ingredients only from Oregon and Washington. The malt bill includes pale, pilsner, wheat, and Munich malts from Skagit Valley Malting in Washington and Mecca Grade from Madras, Oregon. Jan and Charles both have a love of Amarillo hops so they picked up fresh Amarillos directly from Crosby Hop Farm in Woodburn, Oregon, and added them to the whirlpool just hours after leaving the farm. The beer will tap at the LIttle Beast pub the moment the beer is ready. Stay up to date on the release of this beer by following Little Beast on social media.