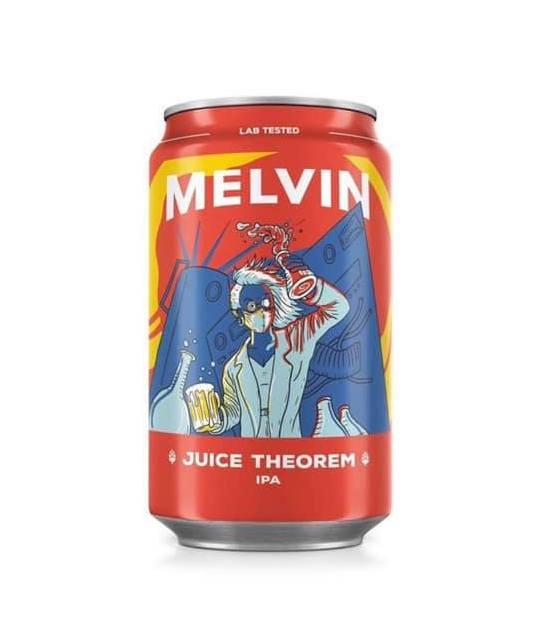 Alpine, WY (February 15, 2021) —Melvin Brewing welcomes the new year with a new school West Coast IPA that proves clear IPA’s can be just as juicy as their hazy counterparts. Juice Theorem (7% ABV and 70 IBUS) is juicier than your typical West Coast IPA, clearer than a New England IPA and a trip to paradise bursting with fruity, tropical hops.

Since its Alpine inception, the lab has always been an integral part of Melvin Brewing. Our team of rad (mad?) scientists proposed a theorem: that clear IPAs can be just as juicy as their hazy counterparts. Why did we want to make a clear IPA? Because we like to push boundaries. Juice Theorem is a testament to our lab crew’s zymurgy: a first-of-its-kind, post-modern IPA. Juice Theorem is full of bright, juicy citrus and berry flavors with less malt, a subtle bitterness and the same crisp finish you’ve come to expect.

“I’ve been brewing professionally for over 15 years, and constantly refining my IPA recipes the whole time. Coming over to Melvin, I was super excited to focus on hoppy beers, and with this one we wanted to showcase tropical citrus and berry flavors from the hops, in an IPA that wasn’t hazy.  We made it crisp and relatively clear, with a touch of bitterness, but much less bitterness and maltiness than a traditional West Coast IPA. The hops are mainly late additions, which gives you juicier aromas and flavors. We used Citra, Mosaic and Strata which bring all the hopheads to the yard,” said Melvin’s Head Brewer, Ian Fuller.

“This is our first beer release in six pack cartons and we’re really stoked for that. We are moving our entire lineup to cartons and moving away from plastic six pack holders. Melvin artwork has always been bold and eye-catching, and this move will make the art pop even more no matter how it’s facing on the shelf at the store. For this label, we wanted to showcase the lab at Melvin, which has always been a big focus, and our artist Kelly Halpin came up with this awesome character we call the rad scientist,” -said Marketing Director, Travis Cook.

In conjunction with the March 1 launch of Juice Theorem, look for Text-to-Win info on cartons for prizes including a Melvin-branded ROVR cooler. Melvin is also releasing a new line of Juice Theorem merchandise through its shop.