EUGENE, Ore.—July 23, 2015—In commemoration of the 50th anniversary of Mount Angel Oktoberfest, Ninkasi Brewing Company releases a specially-brewed German-style Oktoberfest this August to 12-ounce 6-packs and draft sold throughout Northern Oregon and Southern Washington. The beer will also be featured throughout the festival, happening Sept. 17-20, in Mount Angel, Ore.

The largest Oktoberfest celebration in the Pacific Northwest, Mount Angel Oktoberfest draws more than 350,000 people each September. Since 1966, the festival celebrates the harvest with a focus on the thriving local hop industry. Complete with four biergartens, world class entertainment, Bavarian treats, family-friendly activities, a car show and more, the Mount Angel Oktoberfest offers something for everyone.

“The opportunity to partner directly with local hop farmers and make a beer to celebrate such a big milestone with the Mount Angel Oktoberfest is a great demonstration of the things that make it so awesome to be a part of the craft beer industry in the Pacific Northwest,” says Ninkasi CEO Nikos Ridge.  “Our commemorative beer is not only brewed true to the Oktoberfest style, but also features hops from local farmers including Goschie, 4B and Annen farms.”

“A special lager graced with Ninkasi’s creative, quality brewing will help us to provide the best possible experience for our beer drinking guests,” explains Peter Schmidt, Mount Angel Oktoberfest VP. “Ninkasi helps share the message that our festival is a harvest celebration, by using one of our local treasured crops; hops, harvested from fields just out of town.” 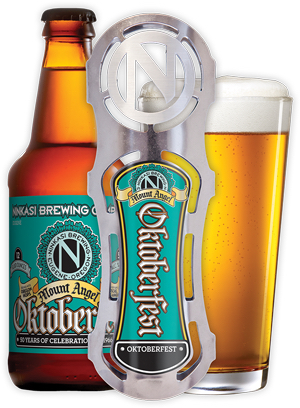 Description: This commemorative beer marks the 50th anniversary of the Mount Angel Oktoberfest and is brewed with hops cultivated by local farmers. Crafted in Oregon with a nod to its German roots, this lager is light-bodied with a subtle toasty malt complexity. A distinct hop finish is achieved from a final dry hopping of Sorachi Ace. Raise your stein to the biggest Oktoberfest celebration in the Pacific Northwest!